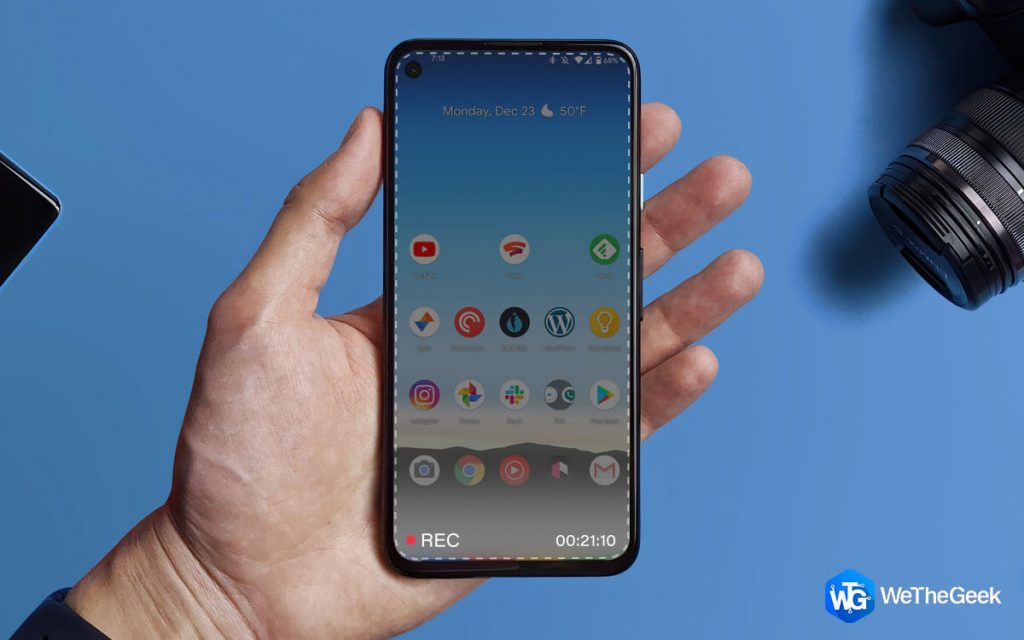 You must already be familiar that almost every device – – Mac, Windows, Android & iPhone comes with a built-in screen recorder feature, but each one works differently.

Talking about mobile phones, fortunately, there are a variety of workarounds available to record both internal audio and display on a smartphone at the same time. Keep reading this article, to learn different ways to record phone screen with sound (with or without using a third-party app)!

Also Read: How To Capture Single Scrolling Screenshots On Android?

Record Screen With Audio On Android With/Without Apps
How To Capture Android Screen Without Using An App?

There are three different ways to record mobile screen without installing a third-party application:

Read the step-by-step instructions to start recording the phone’s display with audio:

All recent versions of Android come with the built-in functionality to record the screen. Hence, you don’t certainly require a third-party mobile screen capturing tool for basic needs. To use the built-in screen recorder, all you have to do is:

STEP 1 = Swipe down from the top of the main screen on your smartphone and from the notifications panel, you’ll be able to access Quick Settings.

STEP 2 = Locate the Screen Record option and tap on the same. You can select further options to grab the screen with sound.

STEP 3 = A quick recording floating icon will appear on your screen.

STEP 4 = Head towards the area where you would like to capture the screen & tap on the Recording icon. The built-in screen recording feature will start working!

Once you are done, you can tap the same recording icon to stop the screen capturing!

Note: The screen recording process may slightly differ, depending on the model and OS version, you are operating on. If you are unable to access the built-in screen recording feature this way. You should try locating the option from Main Settings.

You might want to learn: How To Take Screenshots Of Recovery Mode In Android?

Another workaround to record mobile screens is with Google Play Games. In most of the scenarios, the app comes pre-installed on most smartphones. To start recording using it, all you have to do is:

STEP 2 = Tap on the Library section to locate the games, you have installed on your device.

STEP 3 = Once you’ve found the desired game, simply tap on the top-right corner of the screen and you should witness a Video icon.

STEP 4 = As soon as you tap the Video icon, you’ll be able to see the resolutions (720P HD and 480P SD) in which you can capture the display.

Now, you can easily position the screen recorder controls, according to your preferences and start “Android screen recording with sound” as soon as possible. The video will be saved automatically on your device and you can further start editing it accordingly!

Another top-notch method to record screens on Android without an app is through using Android Software Development Kit (SDK) & Android Debug Bridge (ADB). Follow the instructions mentioned below to activate the screen recording functionality:

STEP 3 = As soon as you get the message ‘You are a developer’, simply go back and find the Developer Options menu from the main Settings.

STEP 4 = From the Developer Options menu, you need to locate the Feature flags option, under the Debugging header. From the list, you need to find settings_screenrecord_long_press file. Simply, toggle on the option and you are all set to record the display.

STEP 5 = As soon as the feature is activated, you need to press the Power button for a long time so that the following option will appear: Power off, Restart, Lockdown, and Screenshot feature. Now, long-press the screenshot icon, until you see the Start Recording option. (Refer to the screenshot provided below to get a better idea.)

You might want to read: Android Google Chrome Browser Gets An Editing And Screenshot Tool As A New Update

In case you are looking for advanced features to start screen capturing, try using the Best Screen Capturing Applications for Android!

4. How To Screen Record With Sound On Android Using A Third-Party Recording App?

The market has tons of options when it comes to choosing the best video capturing tools to record mobile displays. If you ask for our recommendation, we suggest using AZ Screen Recorder. The application comes with a wide range of features, such as recording full screen, specific area of your screen with sound via the mic.

STEP 1 = Get started by installing and launching AZ Screen Recorder on your device.

STEP 2 = As soon as you open the screen capturing application, a series of circles will be displayed on the screen. You have the options for grabbing screenshots, recording screens, live streaming & so on.

STEP 3 = Choose the option Record to start the process!

Click on the Stop button from the notifications panel to stop the screen video capturing!

You might want to read: How To Screenshot On Snapchat Without Them Knowing (2021)

Although users do most of the things on their smartphones, if you are looking for an advanced utility to capture a screen with audio on Windows PC, choose none other than TweakShot. The application comes with all the essential features that allow users to record the full screen, specific areas in the fastest manner possible. To know better about the product, read here!

9 Fastest Ways to Take Screenshots on Windows 10 PC
Best Screenshot Apps For Windows To Capture Screen The Way You Like!
Tip of The Week: How To Screenshot On PC/Mac With Mouse Cursor Included!
Top 6 Best Free Chrome Screenshot Extensions

Have any queries or feedback to share? Do drop a line in the comments section below! You can even write to us at support@wethegeek.com!

The post 4 Ways To Record Screen With Audio On Android (2021) appeared first on We The Geek.