Apple’s much awaited Spring Event 2022 finally announced a new iPad Air and iPhone SE 5G, but CEO Tim Cook and his favourite group of diverse senior employees had a much bigger surprise in store.

Not only has Apple announced a new M1 Ultra chip, but also two entirely new product lines in the Mac Studio and Mac Studio Display!

The new iPad Air, conspicuous from its absence at October and September’s Apple events that upgraded the iPad Mini and Pro, has finally arrived, and it was well worth the wait.

The iPad Air has the powerful M1 chip that had been restricted to laptops, desktops, and the iPad Pro until today.

Targeting old Air owners, the Spring Event focused on how the new model has a 60 percent faster CPU and twice-as-powerful graphics unit as the old iPad Air.

The iPad Air also has a 12MP ultrawide front camera with center stage that proved popular on the iPad Mini. There are also improvements to the USB-C port, and app improvements for SWIFT Playgrounds and iMovie. 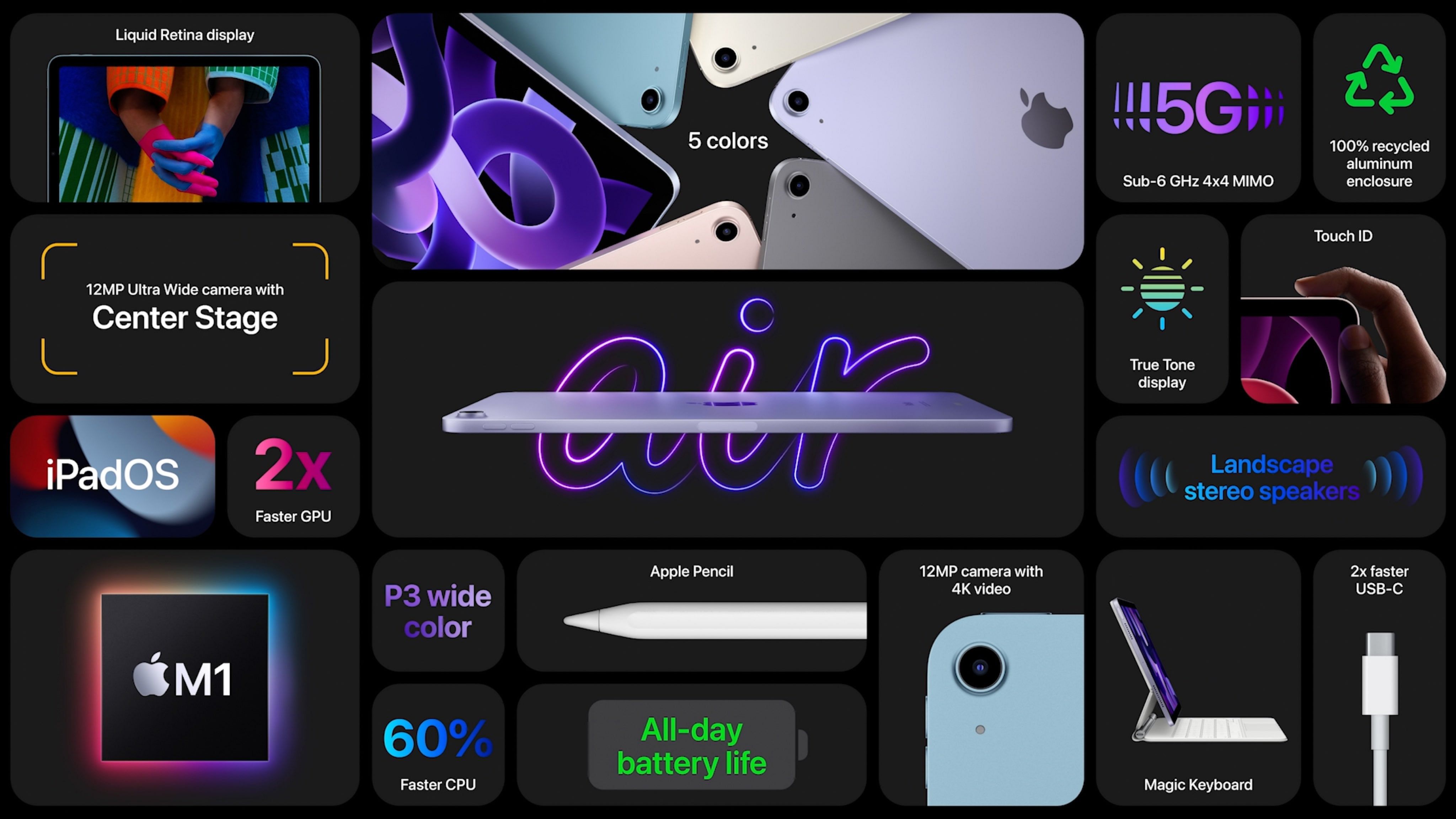 The iPhone SE is Apple’s range of budget smartphones with the software to challenge high-end android competitors. Tuesday’s event announced the launch of the highly anticipated iPhone SE 3 with 5G capabilities.

The launch exceeded all expectations, with the new cheap iPhone getting the high-end A15 bionic chip on the iPhone 13, as well as a 12MP camera.

It must be remembered that a 12MP camera on an Apple works much better than one on an Android because the software and hardware are better integrated.

The stats were compared to the iPhone 8 all night, with Apple targeting either first-time users or iPhone users with a need to upgrade with this new offering.

The iPhone SE comes in three colours; Midnight, Starlight, and Product Red. It is priced at $429 in America (around Rs. 33,000 in India). 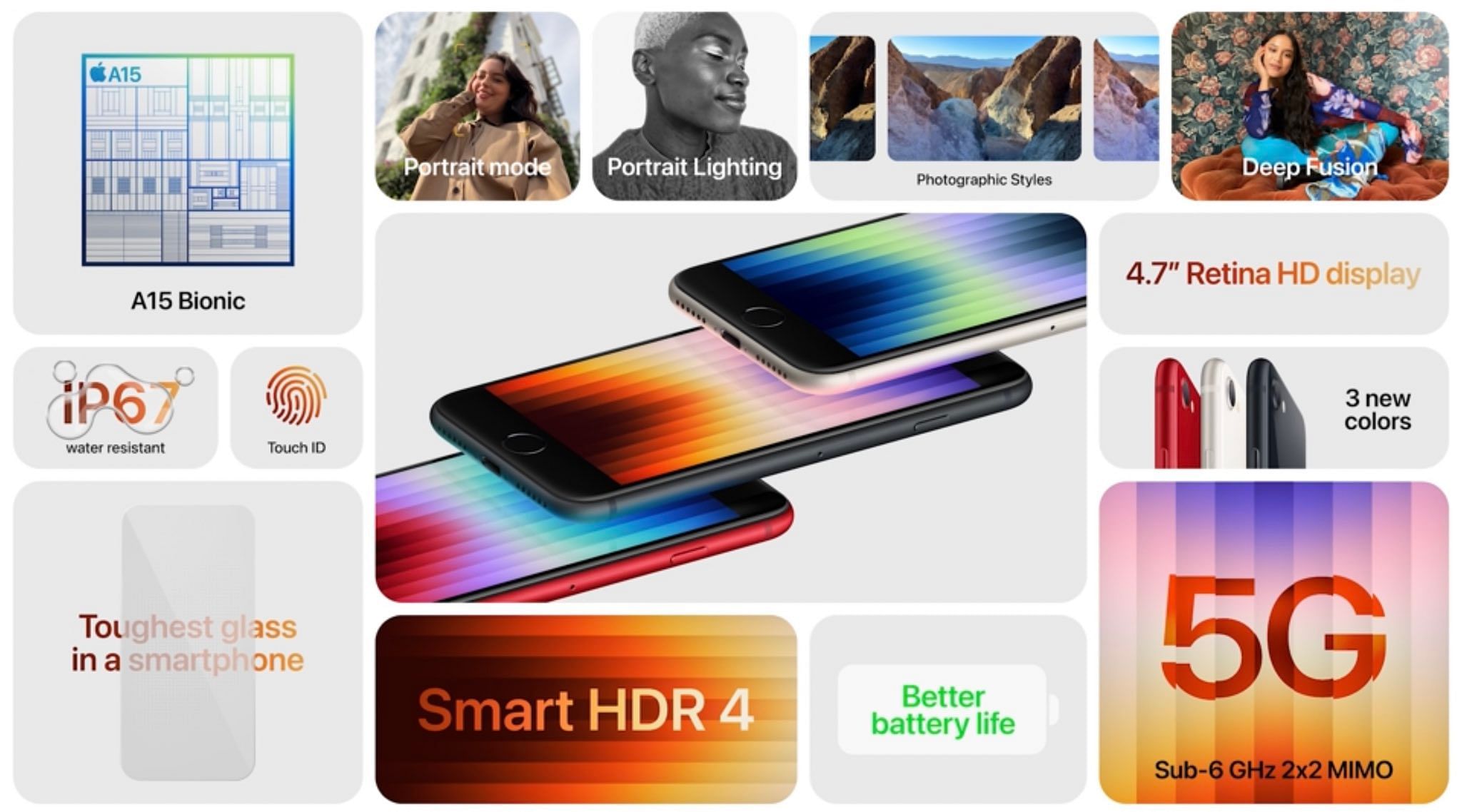 Mac Studio with the M1 Ultra

The biggest surprises of the night were combined in the largest announcement. Not only did Apple announce the M1 Ultra chip, which is essentially two M1 Max chips fused together through Apple’s patented Ultrafusion technology, but announced a brand new product line with the Mac Studio desktop series. 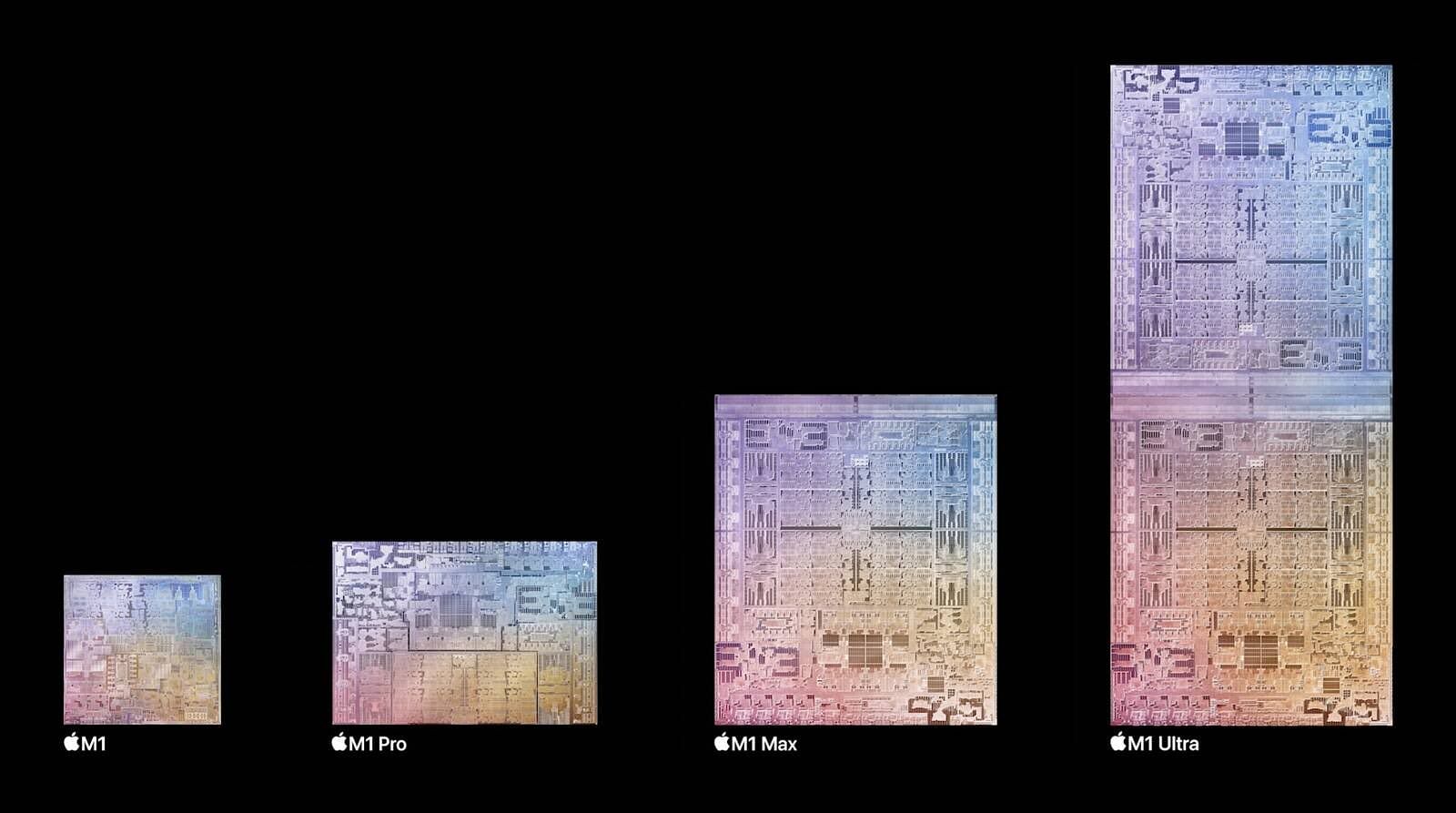 With the industry-leading M1 Ultra at its core, Apple focused on the other big problem users have had for a while. Unlike recent iterations of their phones, laptops, and desktops, the Mac Studio comes with an abundance of connectivity options.

Not only do you get 4 USB-C or Thunderbolt ports, but also 2 USB-A ports, an ethernet port, a HDMI port, and even a 3.5mm audio jack! And, that’s just on the back. On the front, there are another 2 USB-C ports for connecting up to four displays and a 4K TV, plus a SD card reader. 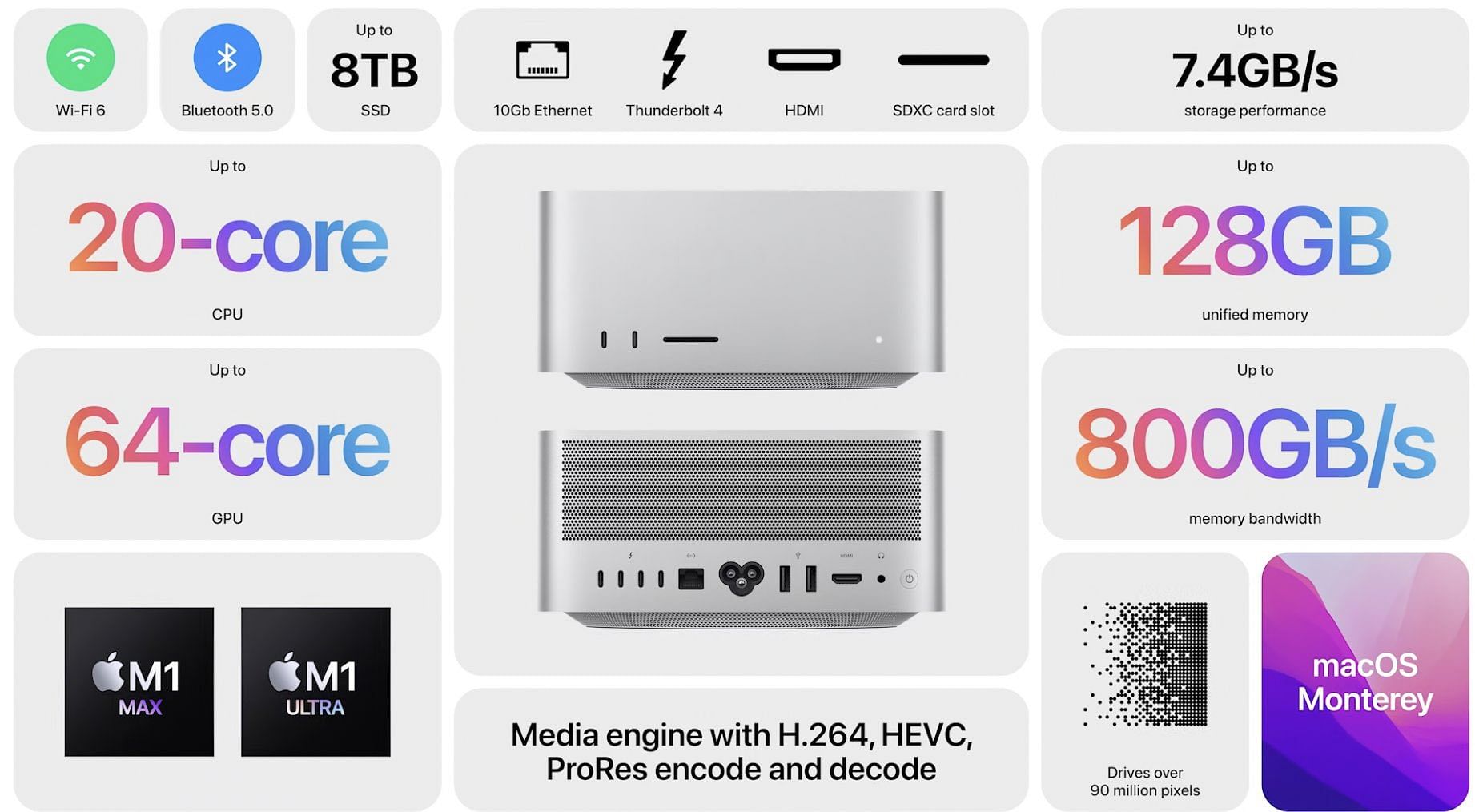 You will need to buy a display (or displays!) to use the all-powerful Mac Studio, and Apple has thoughtfully built the brand new Studio Display to help you out.

The display, which comes with an in-built A13 bionic chip to run processes such as center stage, has a 27-inch display, and comes with six high fidelity speakers and three studio-quality mics.

Additionally, it has 3 USB-C ports, as well as a Thunderbolt port providing 96 watts of power that can be used to charge any apple device including the high end MacBook Pros. In fact, you can connect up to three Studio Displays to a MacBook Pro should you wish to skip the Mac Studio for now. 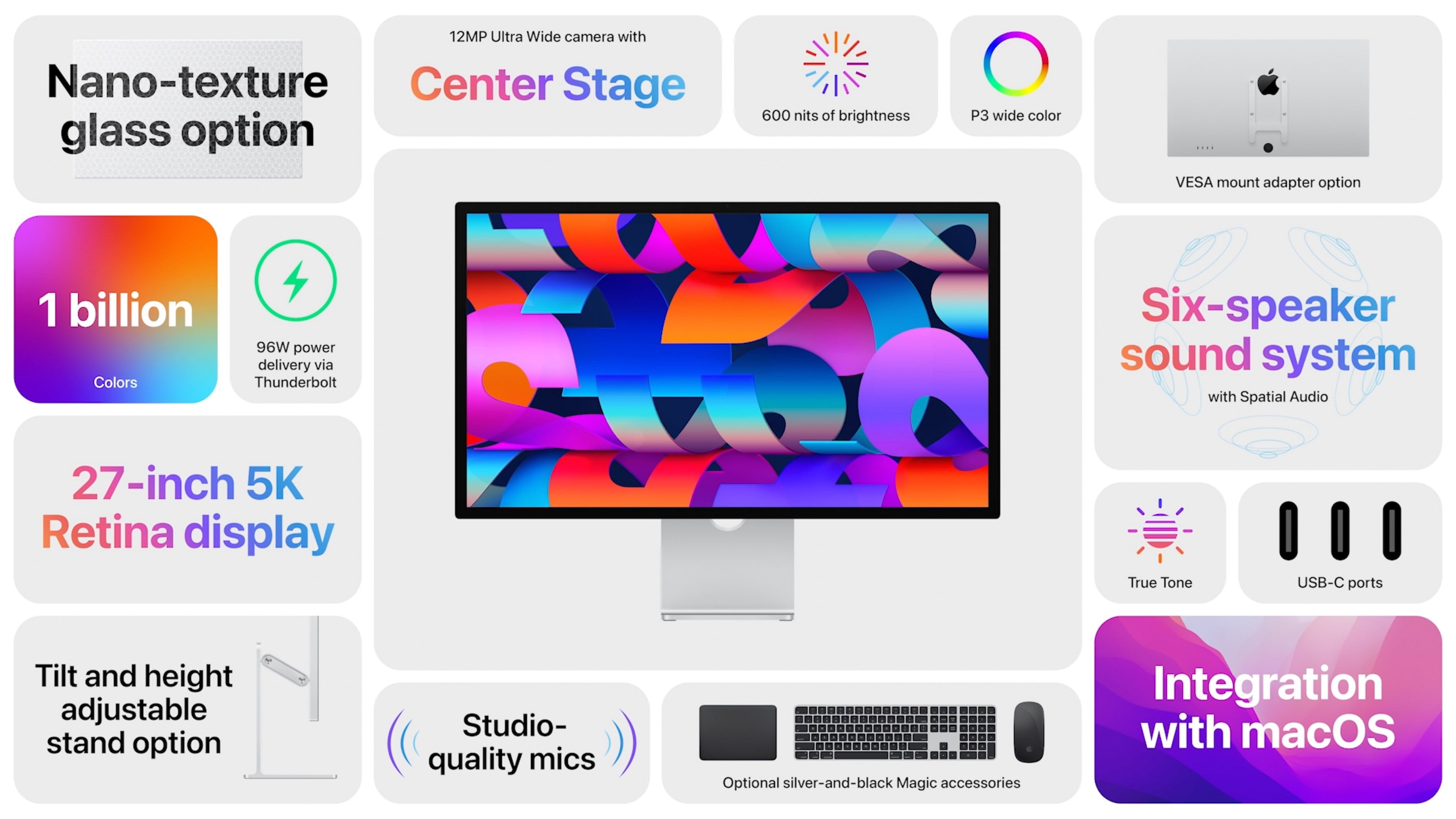 Other UpdatesApple Silicon, the division that builds the new chips, was the hero of the show with a large portion of the time spent on the iPhone SE, the iPad Air, and the Mac Studio used to explain the brilliance of their respective homegrown chips.The iPhone 13 and iPhone 13 Pro will be available in new colours. The 13 will get a bold new Green colour, while the 13 Pro will get an Alpine Green edition.Apple TV+ has secured a deal to show 2 Major League Baseball games every Friday exclusively on their service. This is their first step towards live streaming on the in-house OTT platform.The Magic Keyboard, Trackpad, and Mouse will come in Silver and Black options as Studio Display add-ons.Mac Pro was named checked as the last product line due for an upgrade, but that update was “for another day”.

While Apple undoubtedly announced some incredible new products, there were some surprises in what they did not announce.

As Apple themselves acknowledged, the Mac Pro and Mac Mini have not been upgraded in a while. Additionally, many users were expecting an M2 chip announcement, rather than another M1 upgrade, even if it was an incredible jump in performance.

Finally, iPhone users were hoping for an announcement of the new iOS update that was to bring face recognition with masks on to everyone. However, there was no mention of any such update.