FaceTime is now available on the web, opening up the video app to Android and Windows users.

Siri will now default to functioning on-device rather than online, and it’s also available on third-party devices for the first time.

Cross-device functionality is also rolling out with MacOS Monterey — users can drag and drop files from their iPad to their Mac just as easily as if their cursor was moving across a dual monitor setup.

Apple WWDC 2021’s keynote has revealed all these big news items, along with specifics on what sort of new details are coming to Apple Maps, how the interface is changing to be more intuitive, and what additional privacy features are rolling out with the iOS 15 update this fall.

Read on to learn about the new tools coming with iOS 15, iPadOS 15, WatchOS 8, and MacOS Monterey.

Apple got into the best new software functionality straight out of the gate, opening with their new iOS features. And since we’ve just spent well over a year getting very used to video meetings, Apple has taken their video chat solution to the next level.

FaceTime is getting a big upgrade: It’s coming to the web, available to Android and Windows users for the first time.

Another big new feature is reduction of ambient audio, which can be trimmed out with a new machine-learning-powered function, ensuring that your voice comes through but your neighbor’s weedwhacker in the background doesn’t.

SharePlay is a new FaceTime feature that lets users share a variety of media within their video meeting: Apple Music and Apple TV are the big ones, but third-party apps will also be included, with Twitch, TikTok, Masterclass, and Hulu among the top ones offered.

Users will also get FaceTime links, which let them generate a link for a call and share it over messages, email, and WhatsApp, among others. Paired with the news about FaceTime’s new web functionality, and it’s pretty clear that Apple is trying to compete with the almighty Zoom for a piece of the video meeting pie. 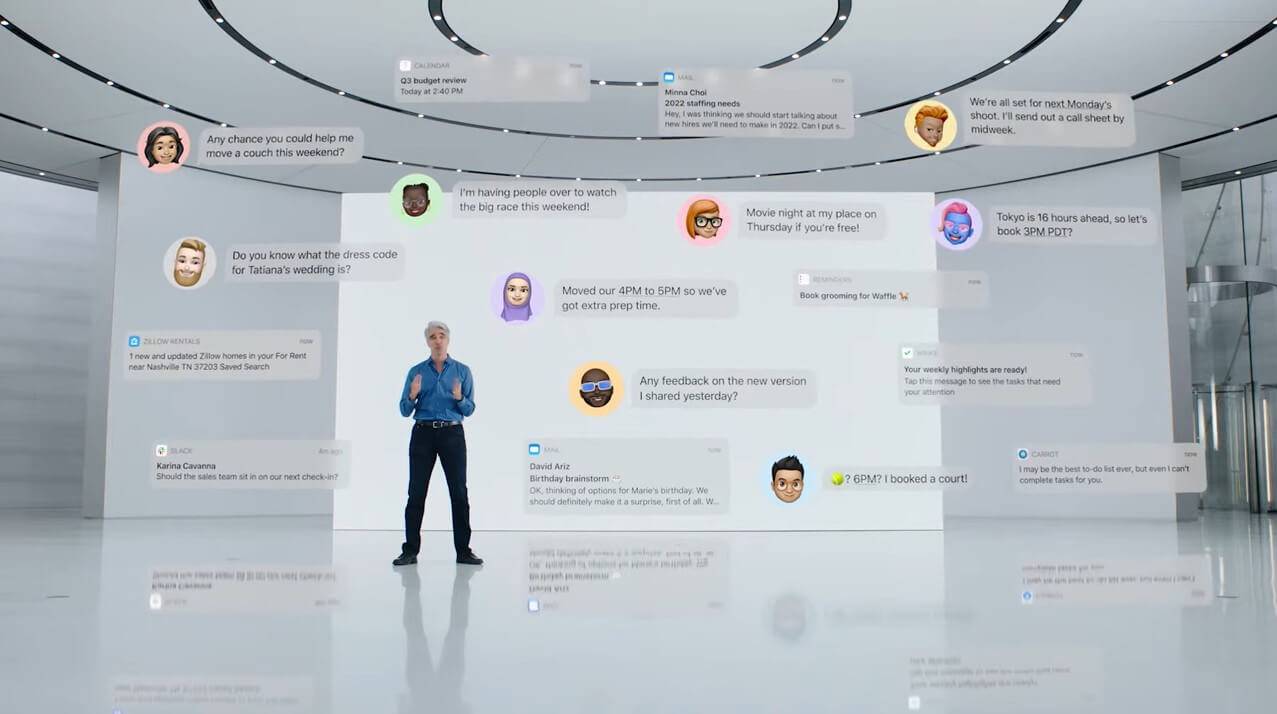 The iOS interface is getting bigger icons, and Apple is continuing to develop its focus on putting the right apps in front of the user when they need them, rather than making users hunt through endless pages of apps.

Notification Summary is one feature designed to guide you to the info you need, as it sends a single summary notification for all the information that’s good to know but isn’t so immediate that you need a notification ASAP.

Focus Suggestions are another new tool, relying on AI to sort through your most valuable photos or using location data to figure out that you’re at the gym and want your favorite playlist. You can set your own Focus Suggestions as well as just let iOS suggest them.

Speaking of photos, Apple is adding some fascinating tools, like Music Mixes. If you’re familiar with the Memories feature on iOS, this is the next step, adding music to the auto-generated slideshows. Music mixes combine suggested collections of photos with songs on your phone to generate an AI-powered slideshow that debuts photos to the beat of the song.

Identity cards are coming to the Apple Wallet. This summer, you’ll be able to scan IDs — like a driver’s license — directly into your phone — as long as you’re in a participating US state.

The Weather app is getting a new design and more complex backgrounds to better match the weather around you. More granular features on current conditions will be coming as well.

Apple Maps is getting more details than ever, with elevation, new road colors, and custom landmarks. A new Night Mode makes the app easier to see in the dark. A ton of Driving Mode updates are rolling out as well — you’ll now see turn lanes, medians, bus and taxi lanes, crosswalks, and bike lanes. It’s all coming to CarPlay later this year as well, although not as quickly as it’s coming to iOS. 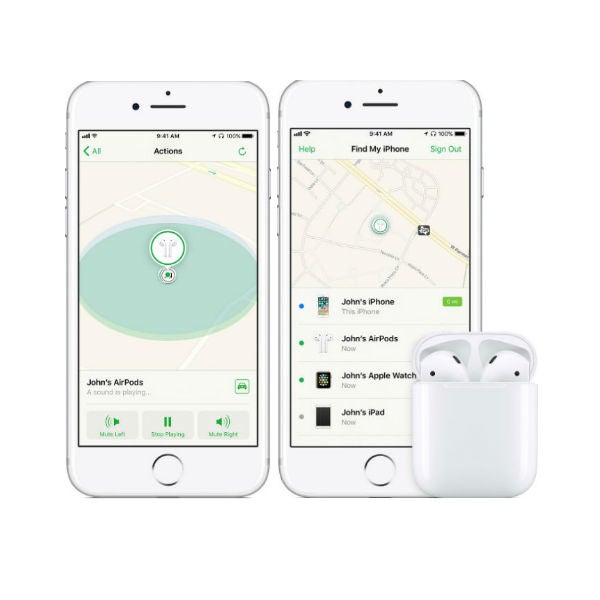 New features include conversation boost, aimed at helping those with mild hearing loss or audio processing difficulties: It’s designed to lock into voice audio specifically, with a slider to let the user adjust how much ambient noise is good for them.

The FindMy network lets you find your AirPods and AirPods Max, which will chirp when you’re close. A separation alert can now be set, so you’ll know when you forgot your AirPods.

Looks like Apple is really happy with their App Library‘s performance on iOS, because they’re bringing it to the iPad. The functionality lets you see all your top apps in one spot, as well as hide apps or re-order them at will. You’ll also get more widgets like the Files widget.

The App Switcher tool comes with more functionality, letting users switch from one app to another with a tap or close an app with a finger flick.

Mentions are an addition to Notes: Mention another user in your note and they’ll get a notification.

But the new QuickNote tool is the big news for Notes on iPad. You can pull up a note from the corner of your iPad while staying within the app you’re using, and you can then link that app to your note, giving you a fast shortcut back to whatever web page or file you wanted to bookmark.

AutoTranslate detects language, so you won’t need to even pick out the language on a dropdown before the iPad starts translating it for you. 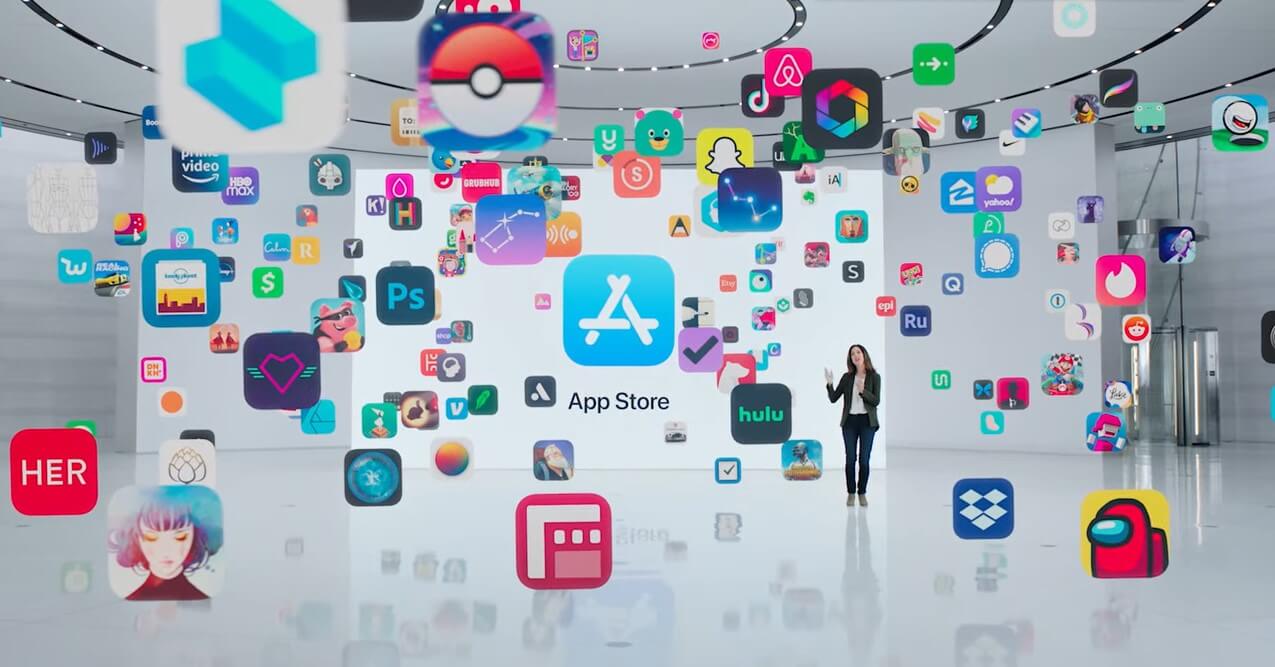 Mail will now hide IP addresses, locations, and if you’ve opened specific emails — that last tweak is a fascinating one because marketers love knowing if you’ve opened their email, and Apple just single-handedly destroyed the usefulness of that metric.

Safari also now hides IP addresses, too, and has added an App Privacy Report to its settings, which includes data on how private your data practices are. Contacts are included in the report, as well as third-party domains your account contacts.

Siri‘s 600 million devices (that’s so many!) are also getting, you guessed it, more private. The big news here? Siri will now automatically process audio on-device rather than over the internet.

It’s also coming to third-party devices for the first time — another huge shift for Siri with big implications for the smart home market, though not an update that makes privacy easier, exactly.

iCloud’s new Private Relay feature, which functions sort of like a VPN that hides your activity even from Apple itself, sending all requests through two separate internet relays. That’s a big change, and one that actually indicates Apple really does care about your privacy.

Other iCloud features include Hide My Email, which lets you sign up for services with a randomized email address, and HomeKit Secure Video, which lets you connect as many home security cams as you need, with no impact on your storage limit. 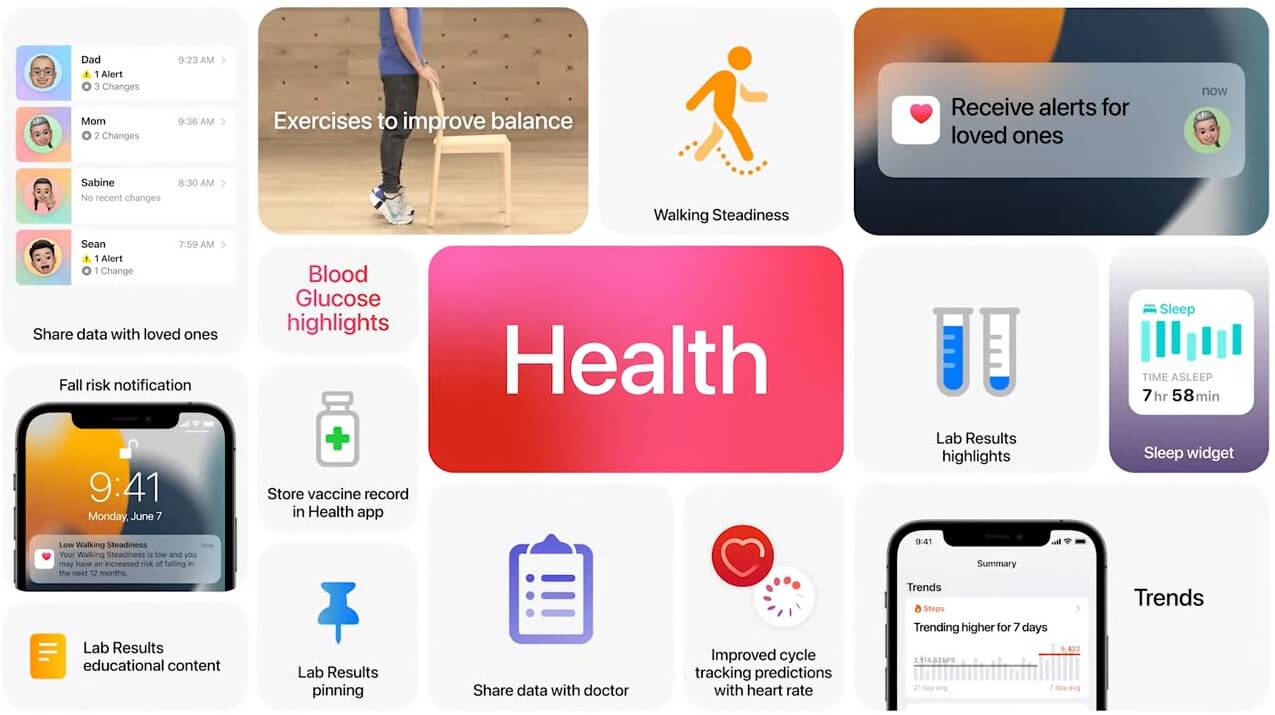 Apple’s Health app also got upgrades. Walking Steadiness will now be trackable, with notifications alerting you to unsteadiness in your walking gait and your fall risk.

The Health Summary views will offer insights designed to help make the data you already have more useful and understandable — not sure if your LDL cholesterol levels are bad, or what exactly LDL cholesterol is? You’ll get a quick definition that’s relevant to you.

Heart data can now be shared directly from your Health app with your doctor, encrypted to ensure no one else (even Apple) sees it. Health sharing is a related feature, letting users consent to share specific data with loved ones — if your mom’s resting heart rate is up, for example you can get a notification and drop her a message checking in. 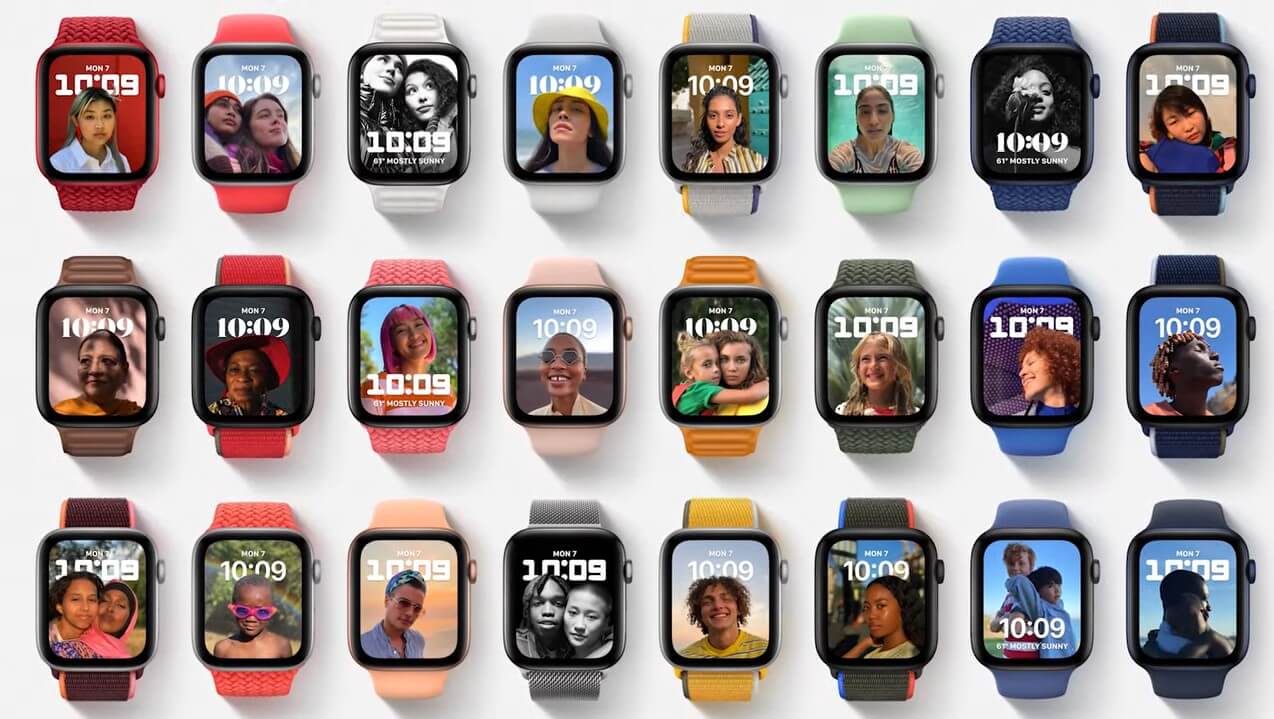 WatchOS is adding new designs for its Breathe app, as well as a new Mindfulness app, aimed at encouraging users to relax and reflect. Tai chi and Pilates are among the new workout styles being added.

Portraits is a new watch face function that lets users set the faces of their loved ones on their watch face. The new Scribble view lets users send a message with finger swipes translating into text and, of course, a button for adding a few emojis. Gifs are now supported. 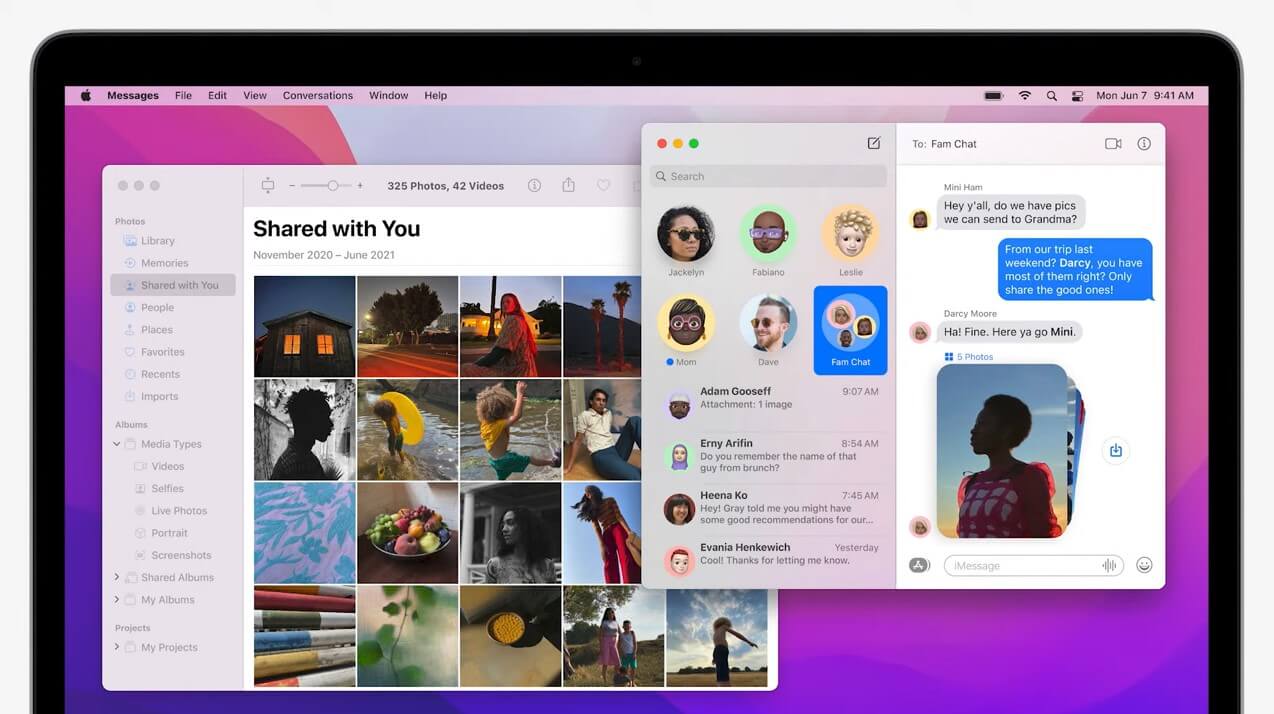 The new MacOS focuses on better integrating and connecting with other Apple software and devices, with Universal Control as a particular standout.

Universal Control is an update that gives users cross-software functionality — the trackpad and keyboard on Mac will now work with iPad. Set your iPad next to your Mac, and you’ll be able to move your cursor freely between the two, even dragging and dropping files. The demo at the WWDC event included a three-device drag-and-drop, moving from iMac to MacBook to iPad.

Other updates include Focus, which lets users set up granular do-not-disturb notifications so that they can actually get some work done.

The Safari update comes with a combination URL and search bar. Tab groups are available on a left-sidebar menu. A similar tab bar is available on iOS now too, with a swipe functionality designed to make it easier to switch between tabs on mobile.

Apple’s More Open Than Ever

So what should we make of all the news out from WWDC 21? The biggest features all share one thing in common: They’re aimed at expanding functionality across devices.

In some cases, that expansion is happening within the Apple universe — Apple lovers can now sync up their iPad and their Mac with a mouse and keyboard functionality that works the same across both.

But in other cases, Apple is even opening up its slick white ivory tower to the competition — FaceTime is now opened up to Android and Windows users, while Siri is available to third-party devices. And as a few of the many boundaries between tech hardware get more porous than before, software will be easier to use than ever.

The post Everything to Know About iOS 15, iPadOS 15, MacOS Monterey appeared first on Tech.co.