Can’t get enough of Wordle? We’ve scoured the internet and made a list of 23 clones, remixes, and other versions of Wordle so you can scratch your five-letter word puzzle itch.

The original Wordle is the daily word puzzle game that has become extremely popular. New York software engineer Josh Wardle (get it?) created an online version of the old Lingo game show just for his partner, who loves word games.

Wordle’s popularity grew exponentially over a short time. There were 90 users a month after launch, hundreds of thousands shortly after, and there are millions of users across the globe now. 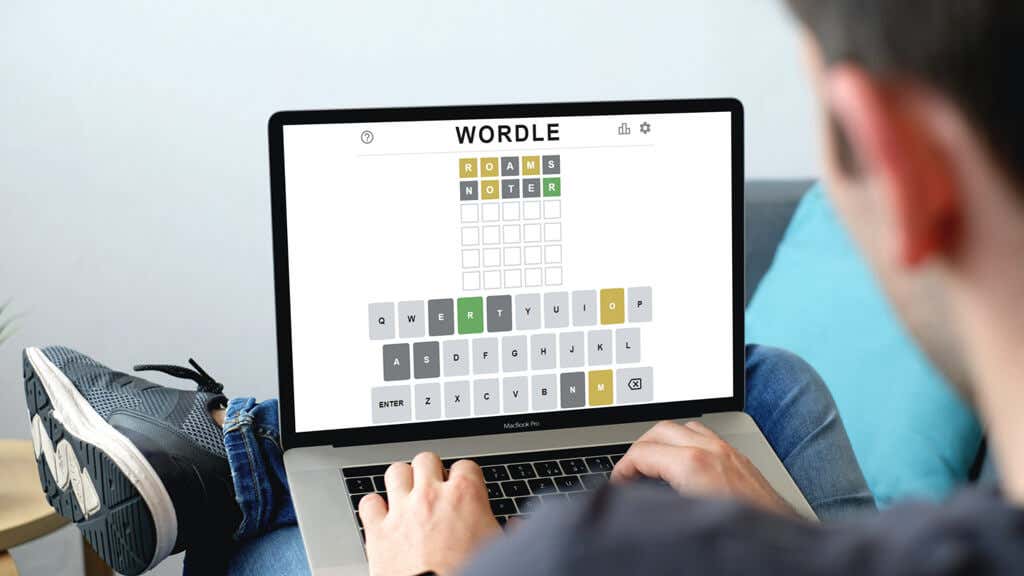 Mr. Wardle, who was also responsible for Reddit’s The Button and Place features, has since sold Wordle to the New York Times, where it appears alongside the NYT crossword puzzle and Spelling Bee.

The rules are simple. You have a maximum of six tries to guess the 5-letter word. “Each guess must be a valid 5 letter word. After each guess, the color of the tiles will change to show how close your guess was to the word.” 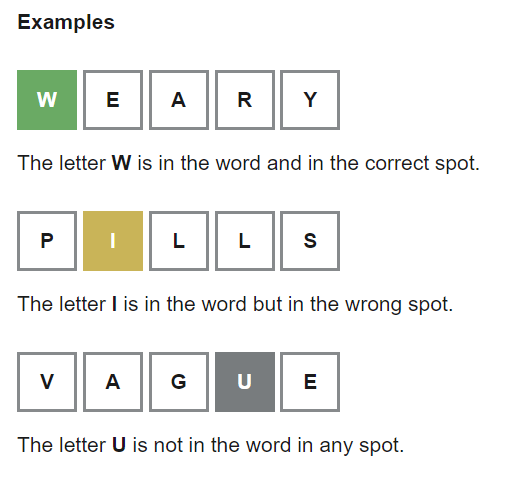 Play Wordle on whatever device you want, Android, iPhone, PC, or Mac, and the site will keep track of your streak. Only one puzzle is released each day, and everyone gets the same word, so many people share their results or a screenshot with friends. So far, Wordle and its alternatives are simple websites, so you don’t need to get them via the app store. Select the links below to guess the new word.

Once people started sharing their Wordle results on social media, other software developers raced to create new versions of Wordle. 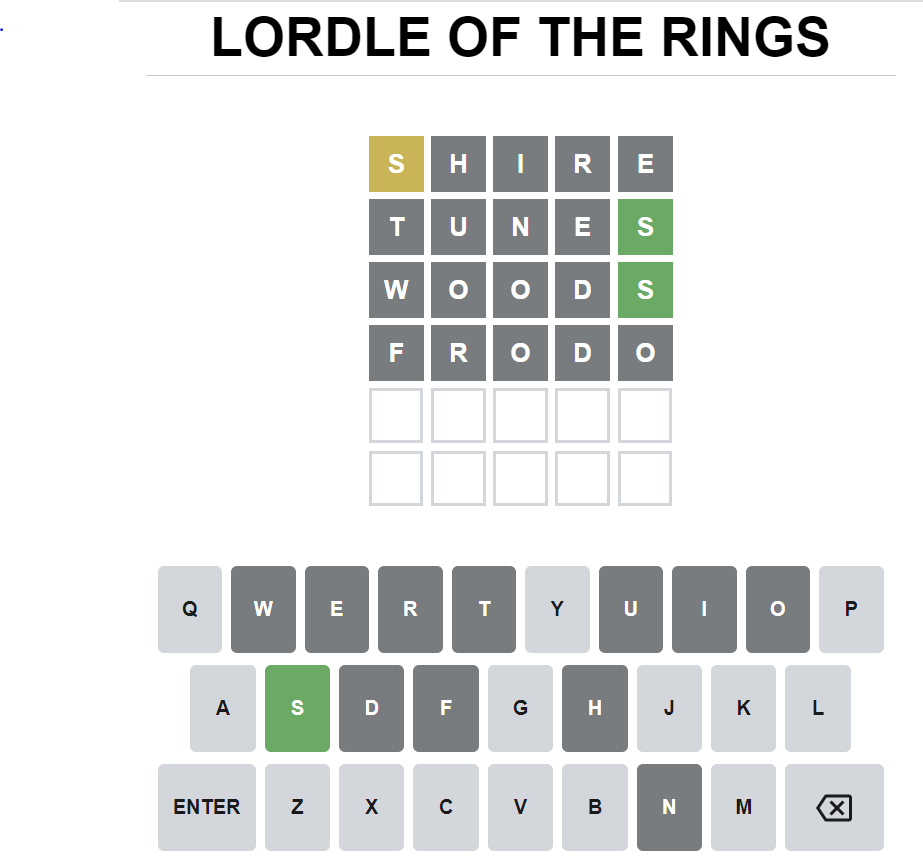 J.R.R. Tolkien fans will love Lordle of the Rings. Correct answers can be any five-letter word, including names, from the Lord of the Rings. So you’re free to guess “Bilbo,” although “shire” might be a better first guess. 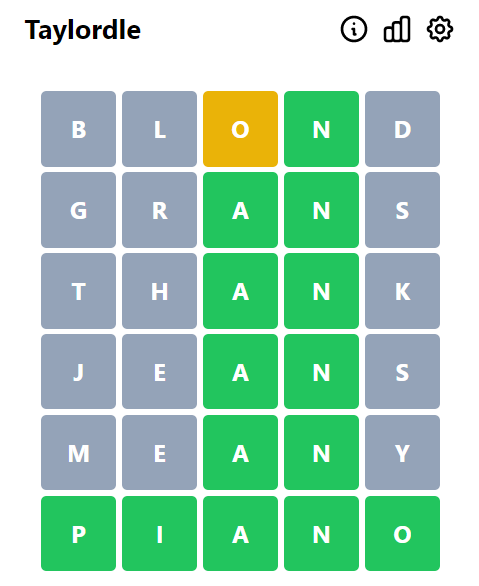 Swifties can enjoy Taylordle created by Hannah Park and modified by the Holy Swift Podcast. 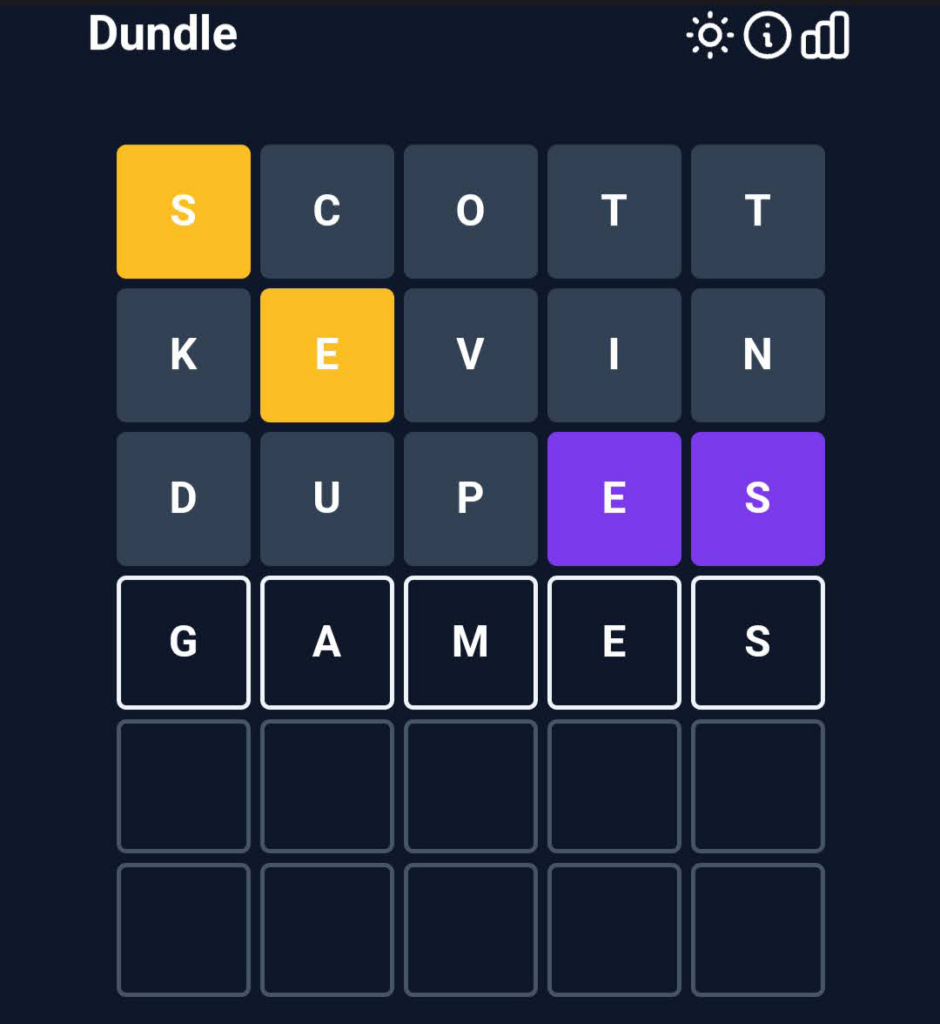 You guessed it. This Wordle is based on The Office. Hannah Park created this one too. 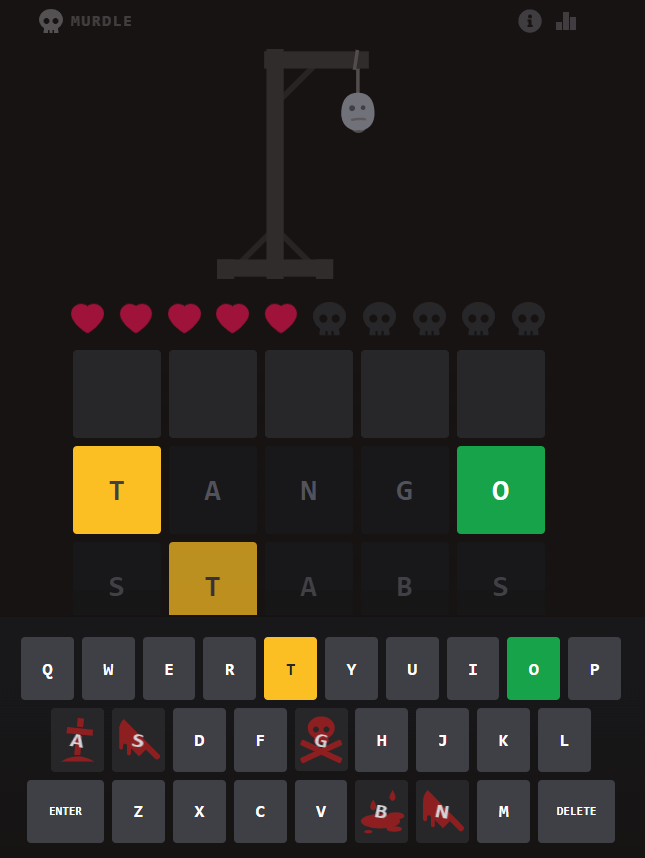 This version incorporates hangman with Wordle. You have unlimited guesses, but you die if you get too many unique letters wrong. 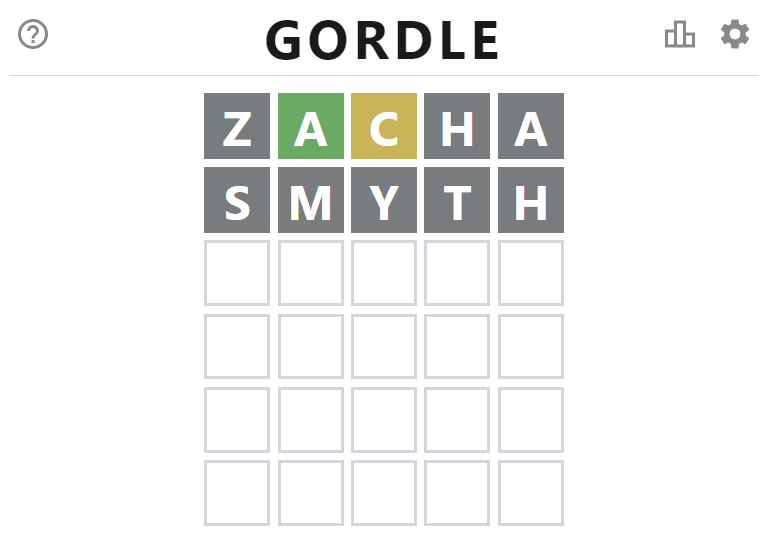 Inspired by Canadian hockey great Gordie Howe, Gordle works just like Wordle, except all your guesses must be a five-letter last name of an NHL player, past or present. 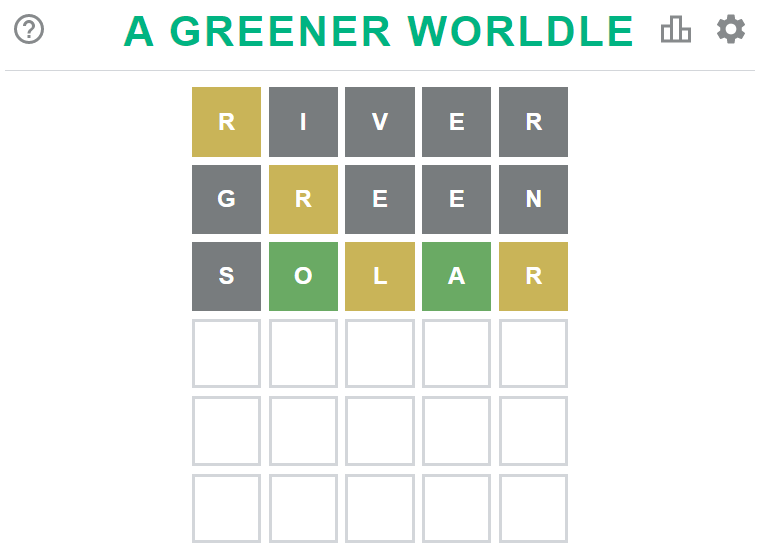 Produced by the International Institute for the Environment and Development (IIED), guesses in A Greener Wordle should be related to the environment and climate change. 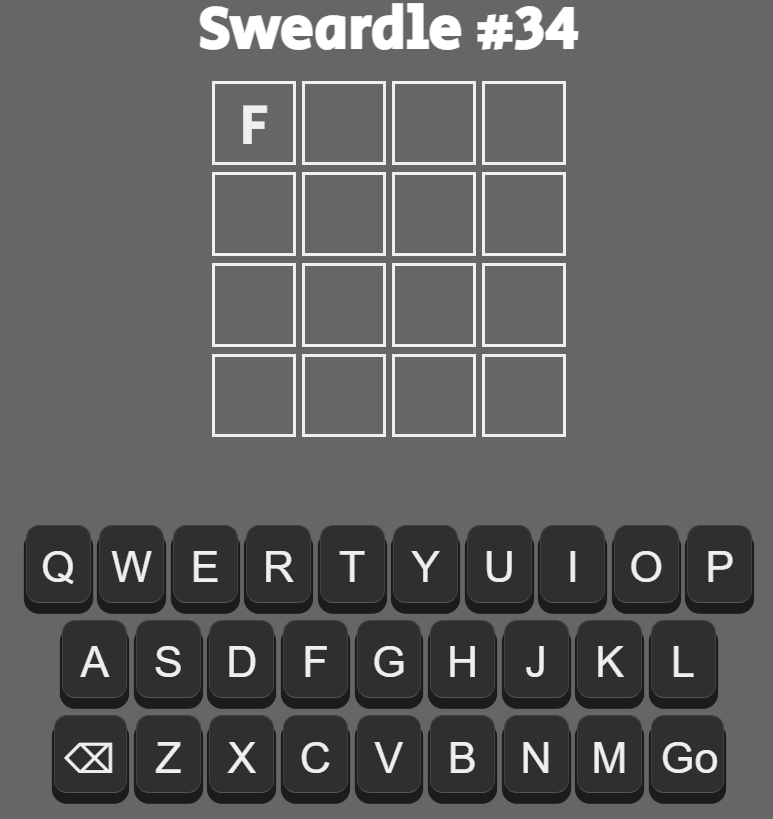 With Sweardle, you’ll be guessing four-letter words. As the instructions say, “You only get 4 chances to guess though, so don’t **** it up.” Don’t play this one at work! And if Sweardle isn’t edgy enough for you, check out Lewdle, which is even more profane, or Queerdle, which is quite raunchy. 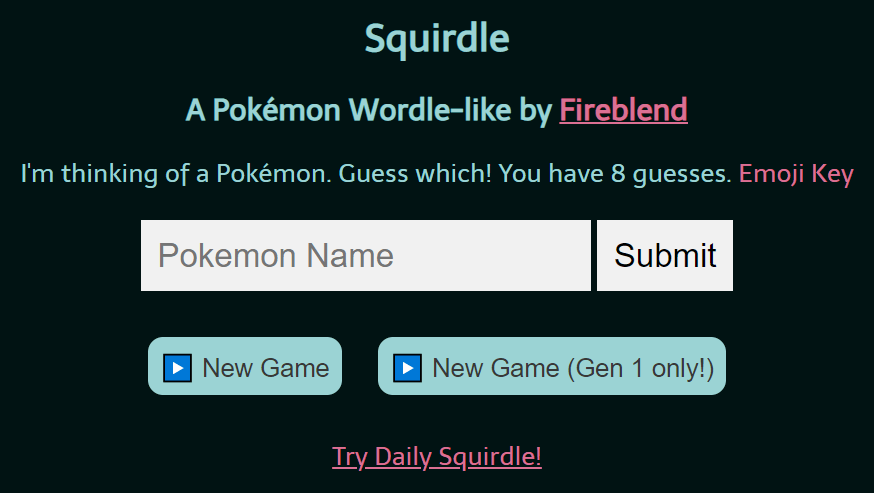 You have eight guesses to name the Pokémon. 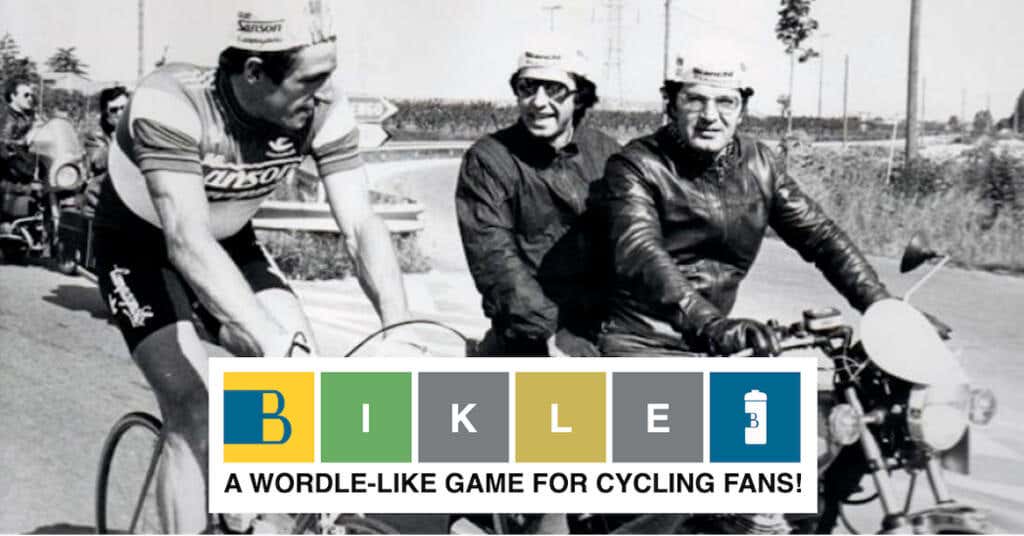 Valid guesses include 5-letter last names of cyclists. The instructions mention, “The difficulty of the solution will vary from day to day: it can be a legend from the past, a well-known name of the present, a domestique who loves breaking away and carrying bidons.” 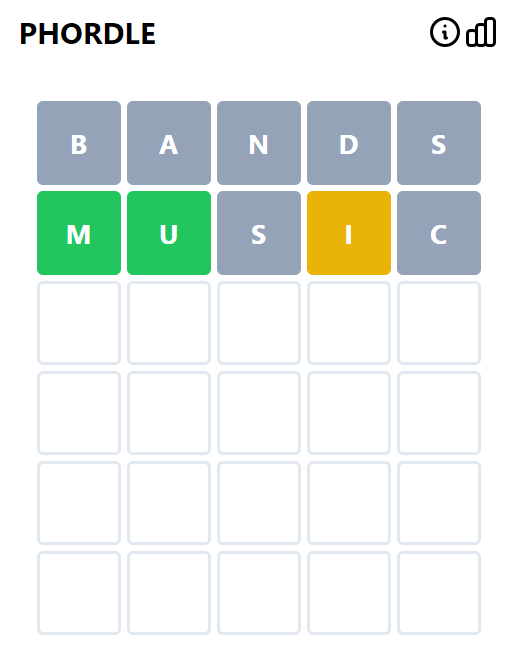 If you’re a fan of the band, check out this Phish-based version of Wordle. It’s phat. 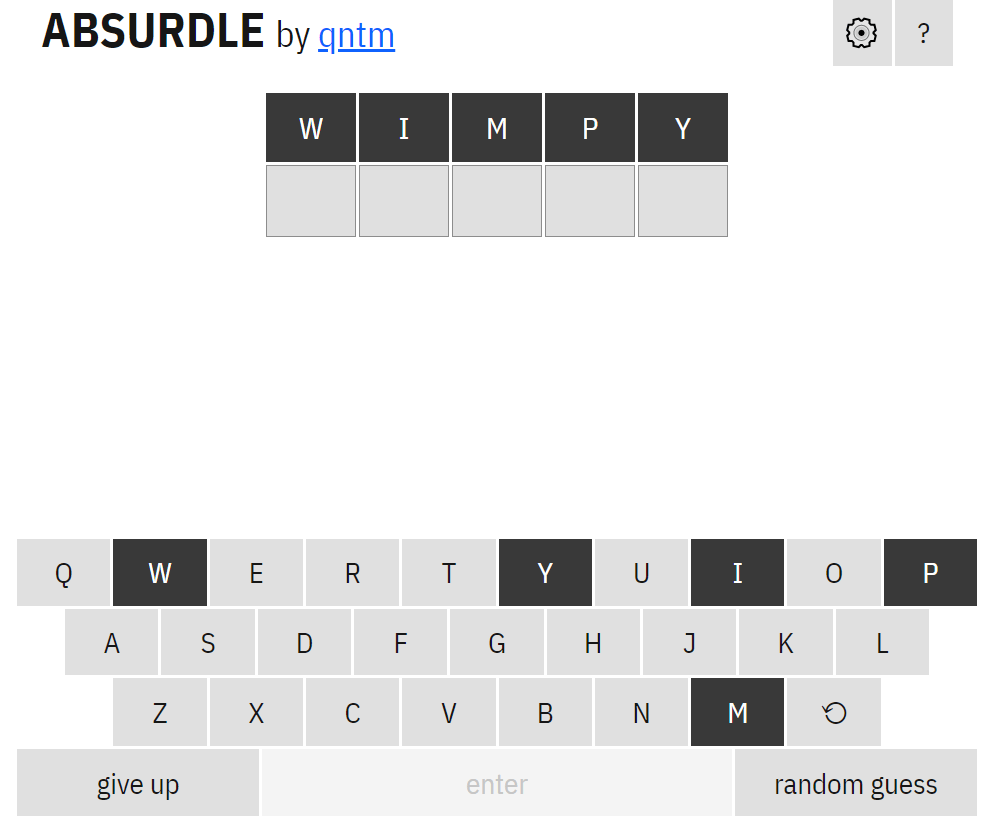 Absurdle’s goal is to drive you crazy. Your goal is to guess the secret word, but it won’t be easy because “Absurdle is actively trying to avoid giving you the answer. With each guess, Absurdle reveals as little information as possible, changing the secret word if need be.” Be sure to read the complete instructions before you start guessing possible words. 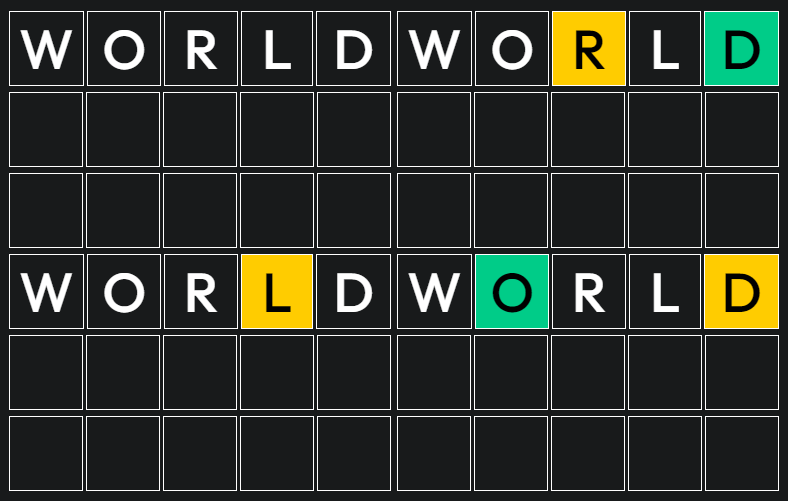 You’ll be solving four puzzles simultaneously with Quordle. The number of letters in each puzzle is the same, but the answers are different.

Thanks to Júda (rwmpelstilzchen), we’ve got an extensive repository of foreign language Wordle games from Afrikaans to Yiddish and hundreds of languages in between. 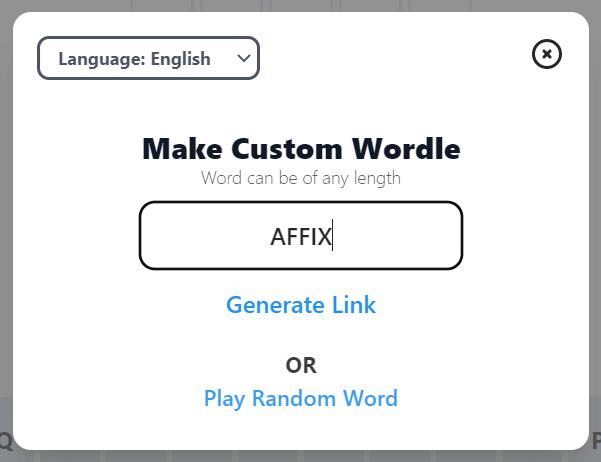 If you think you’ve got the best Wordle word ever, you can create your own custom Wordle game. 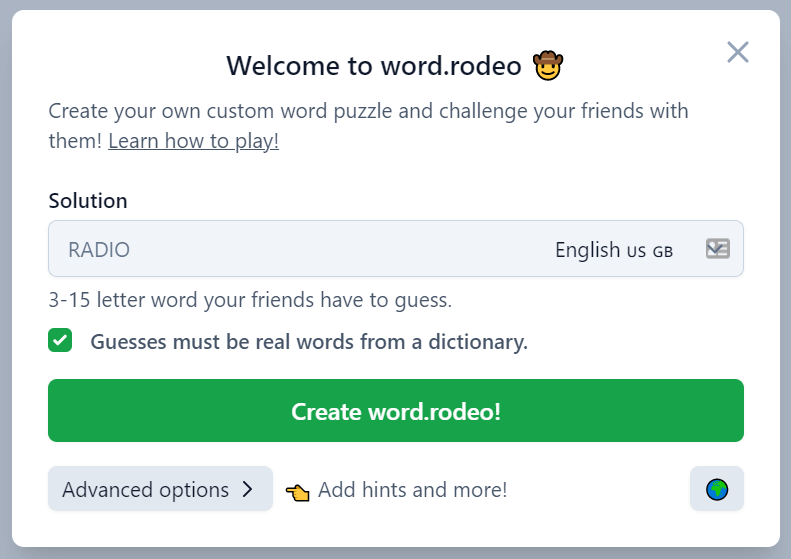 Word.Rodeo is another custom Wordle maker. It’s not entirely multiplayer, but you can share your puzzle creations with your friends.

If the New York Times ever starts requiring Wordle players to be subscribers, we’ll mention a couple of straight up copies of Wordle, including Hello Wordle and Word Master. Wordle Unlimited is another clone, except you can guess nonsense words, too.

In these games, your guesses won’t be words, per se, but the games work similarly to Wordle. 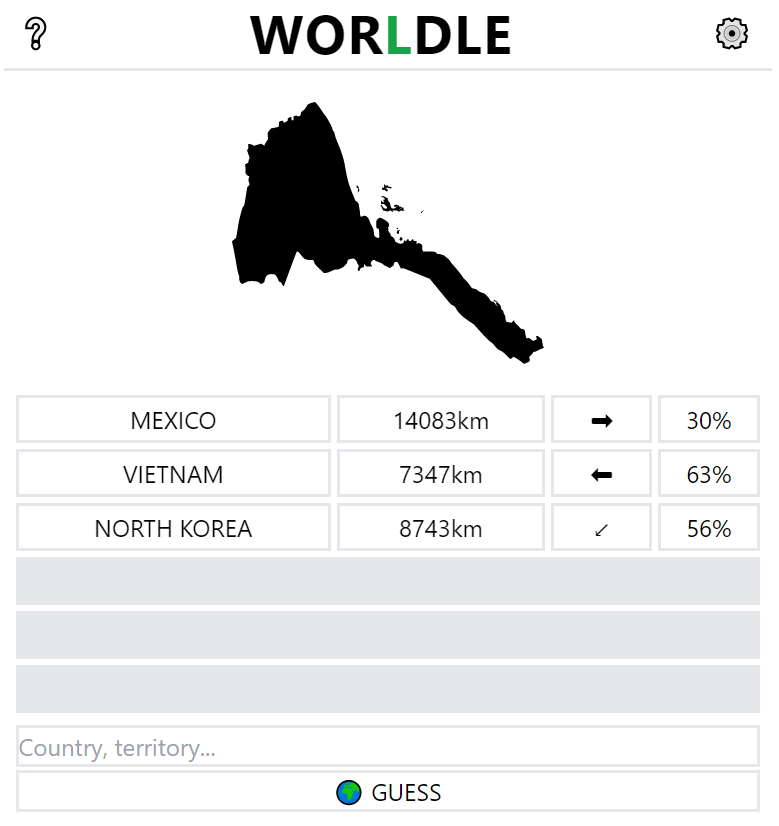 Guess the country or territory by its shape and info about how far away it is from the places you guess. 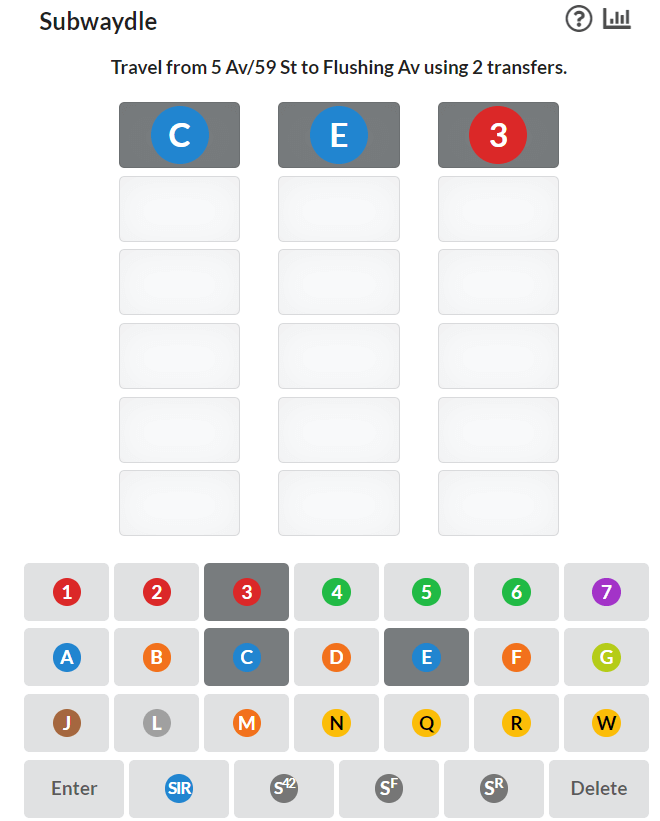 Here’s one for anyone who hearts NY. Each guess must be a valid subway trip involving three trains using available transfers between them. 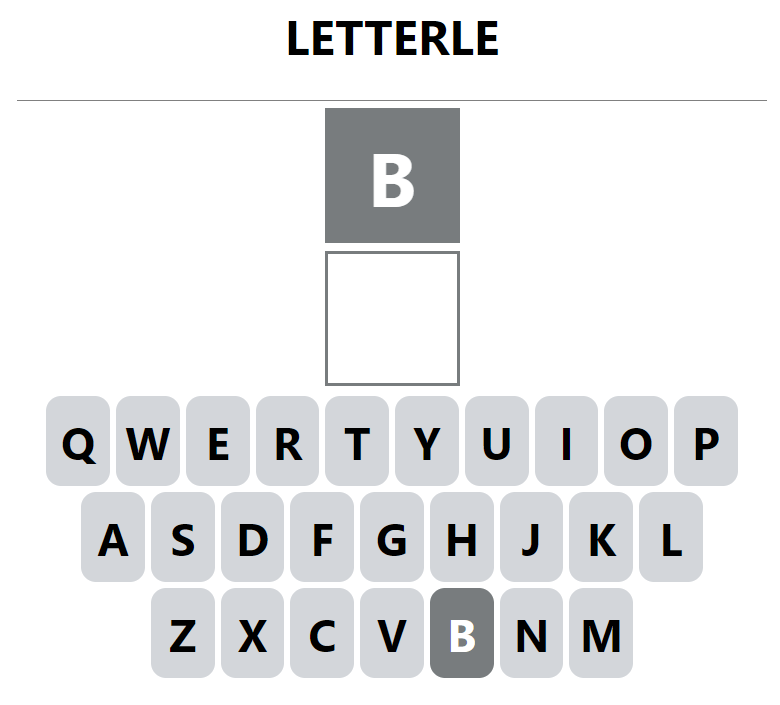 This one might be even more absurd than Absurdle. Guess the single letter. 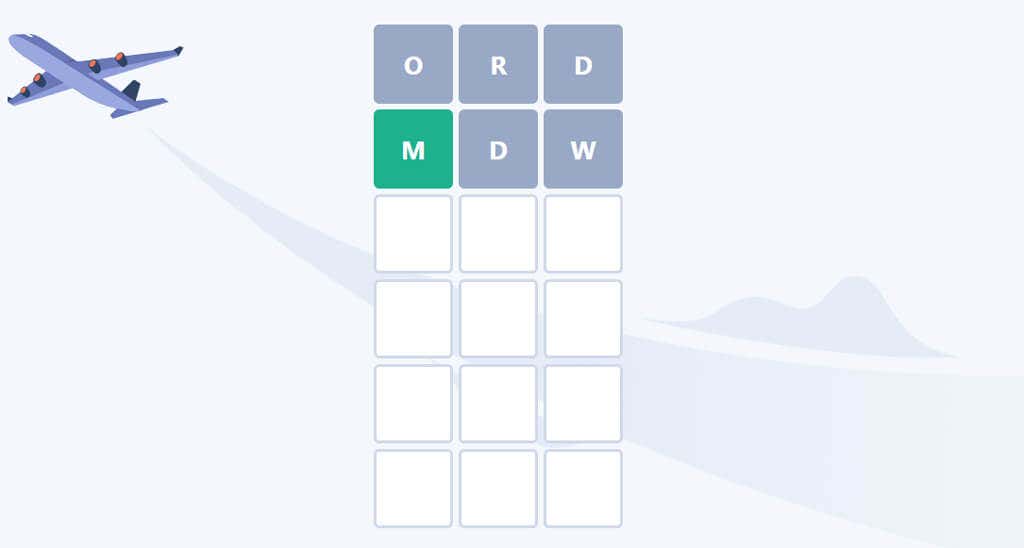 Scott’s Cheap Flights wants you to guess the airport code in this non-linguistic version of Wordle. 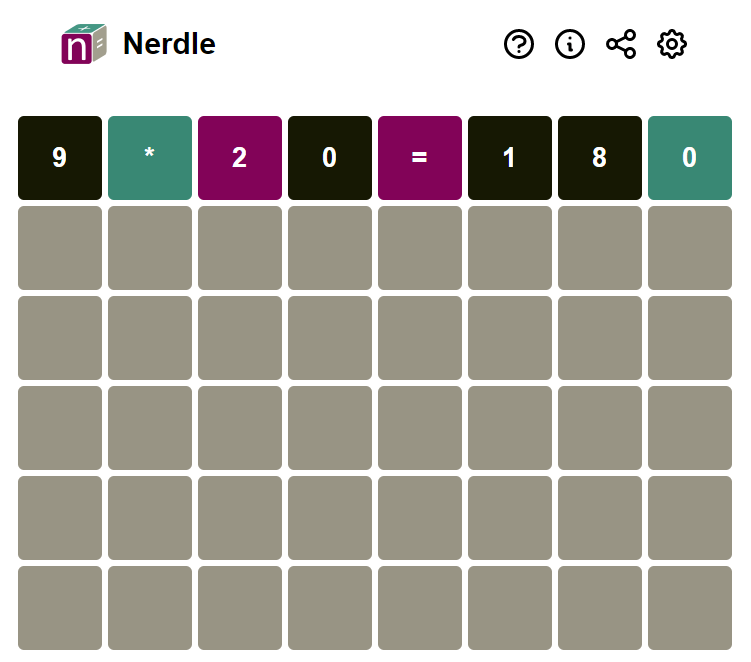 In Nerdle, a word must be a mathematically correct calculation, so it must have an = sign. Does your brain hurt yet? 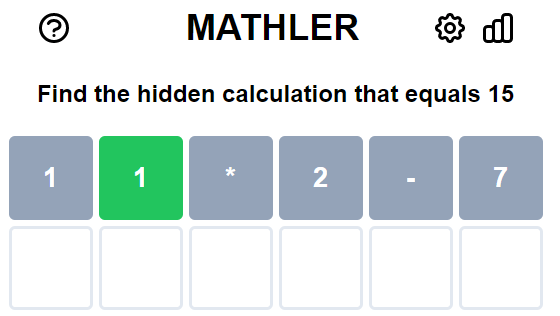 In Mathler, the target number changes each day. Can you find the hidden calculation?

Numble is similar to Mathler. Come up with an equation that equals the number given. Remember the order of operations! 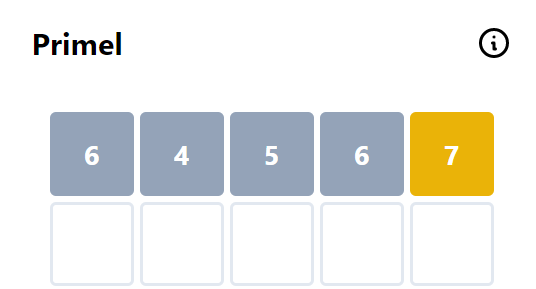 The last entry on our list is Primel. There are about 90,000 prime numbers with five digits. Can you guess the right one?

Let us know in the comments which Wordle-inspired online games you liked best.