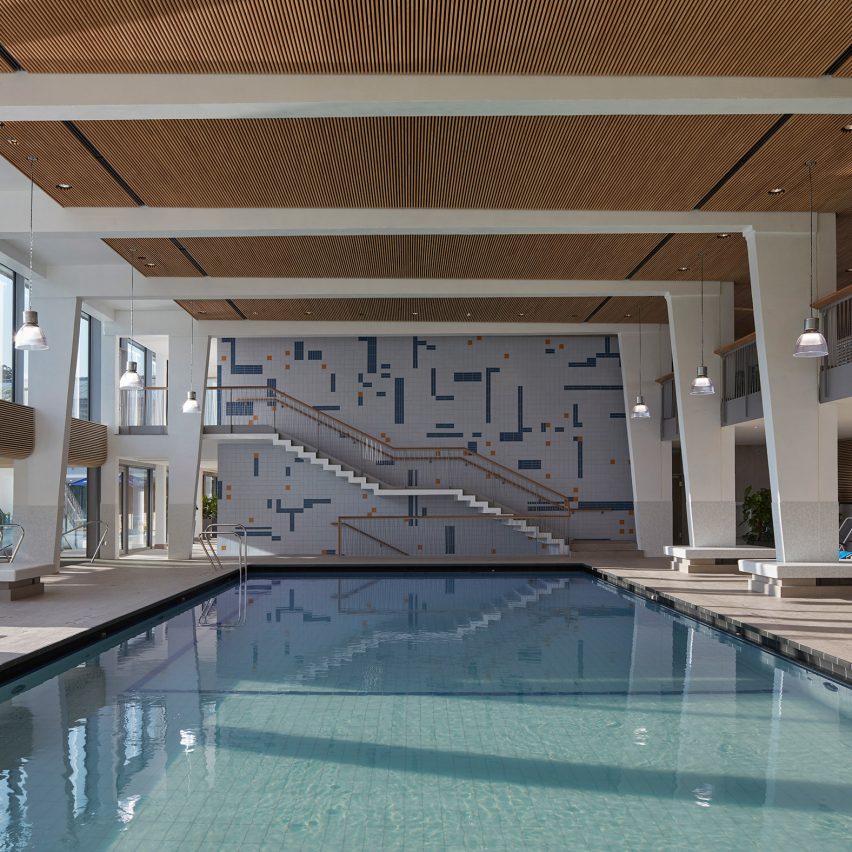 German studio 4a Architekten has renovated the 1950s buildings and outdoor swimming pool at the historic Bad Berg mineral baths in central Stuttgart.

The studio aimed to create a modern facility while retaining the character of Stuttgart’s oldest swimming bath, which was originally established in 1856 but largely built in the 1950s. 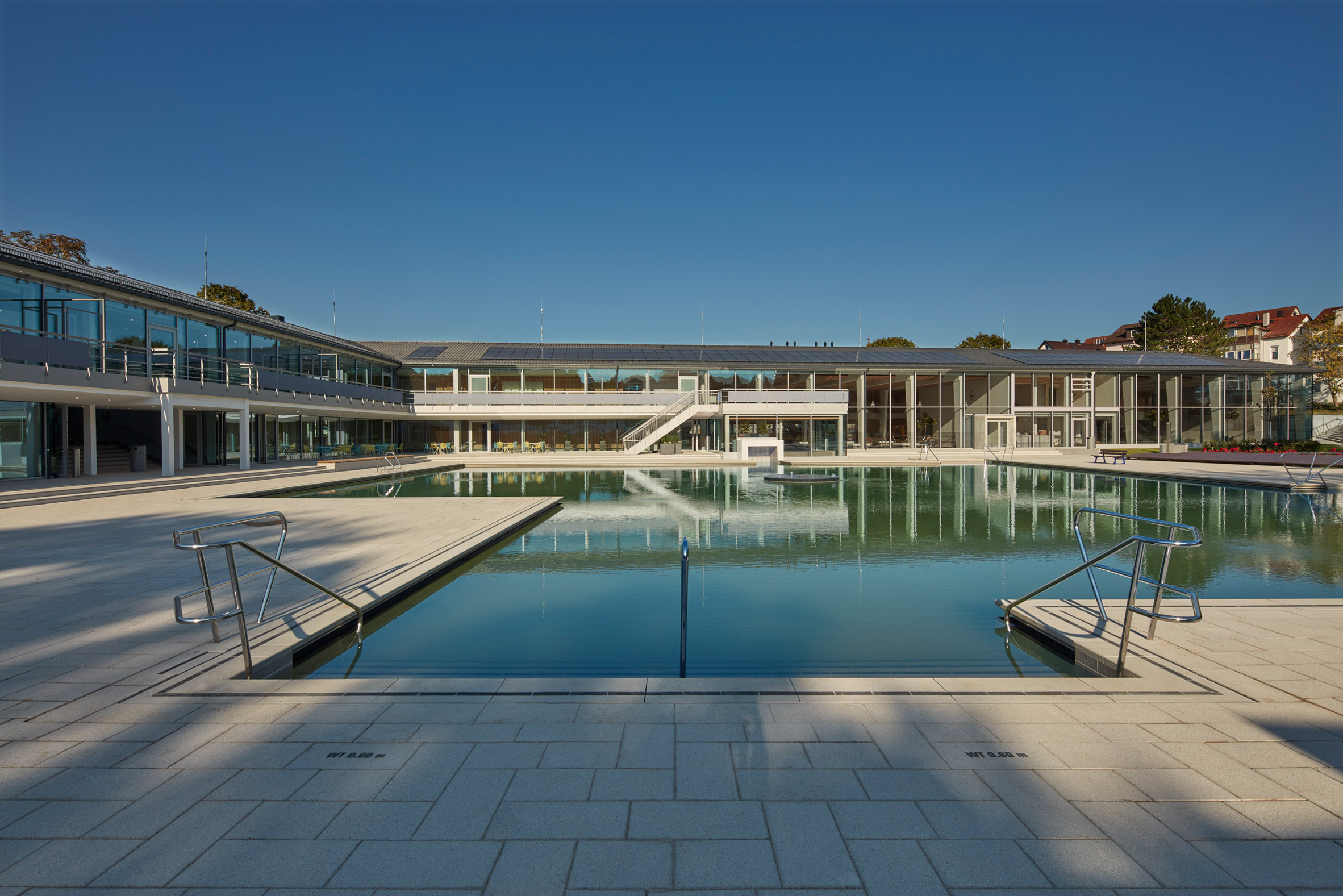 “The Bad Berg has achieved cult status among the inhabitants of Stuttgart,” said 4a Architekten managing director Matthias Burkart.

“For us, the special challenge was to preserve the unique character of the bath and to interpret the style of the 1950s in a contemporary way, although the existing building had to be reduced to its shell,” he told Dezeen.

“Bad Berg is not a listed building and it was up to us to find the right balance between preservation, renovation and addition.” 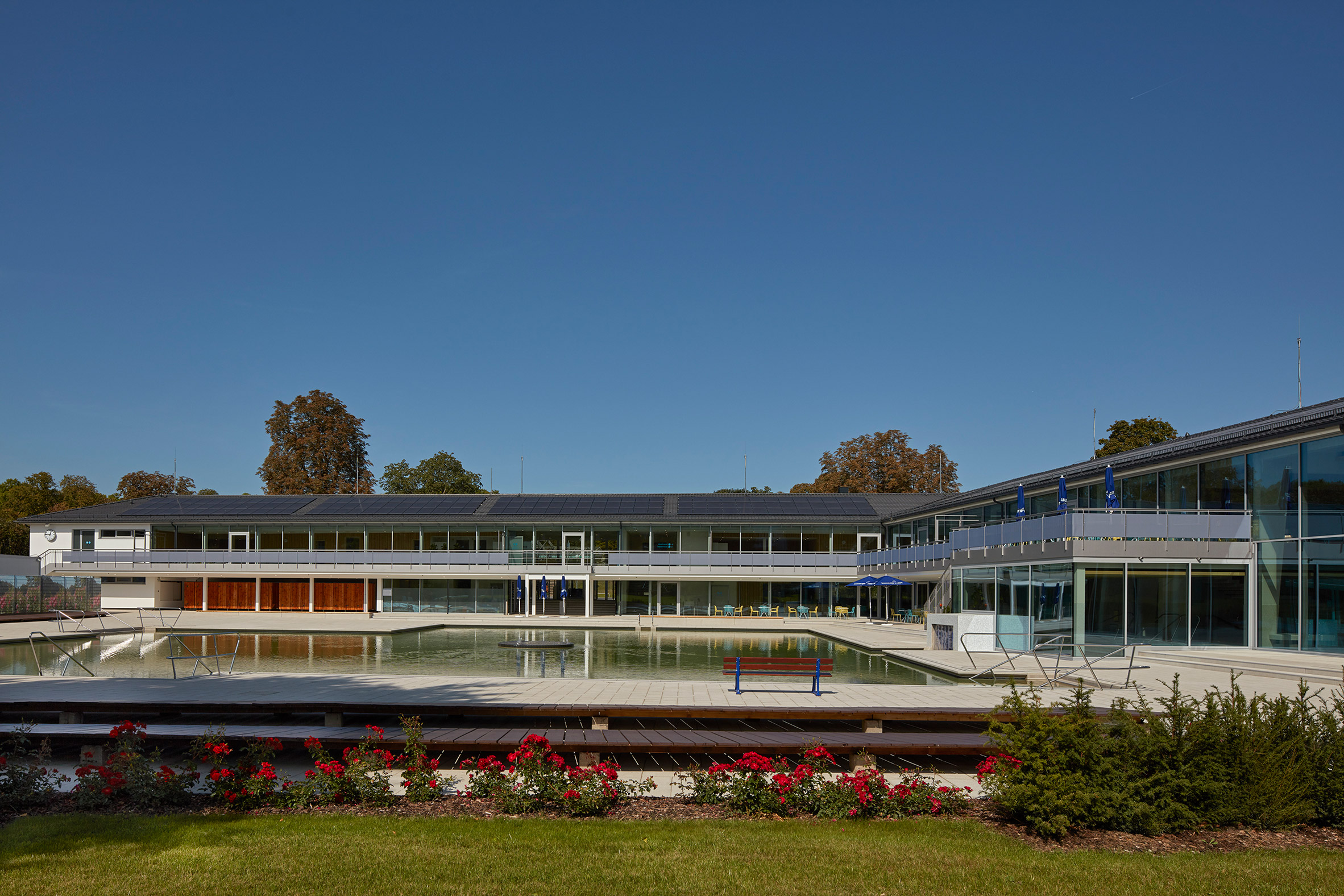 The facility is built on two sides of an outdoor pool

Set in a park in the centre of the town, the facility is built on top of five mineral springs and has two wings built alongside an outdoor pool.

As part of the renovation, both wings were stripped back to their concrete frames while a 1980s addition was demolished and replaced with a modern extension that contains a training pool.

The outdoor pool at the centre of the complex was also entirely rebuilt during the renovation. 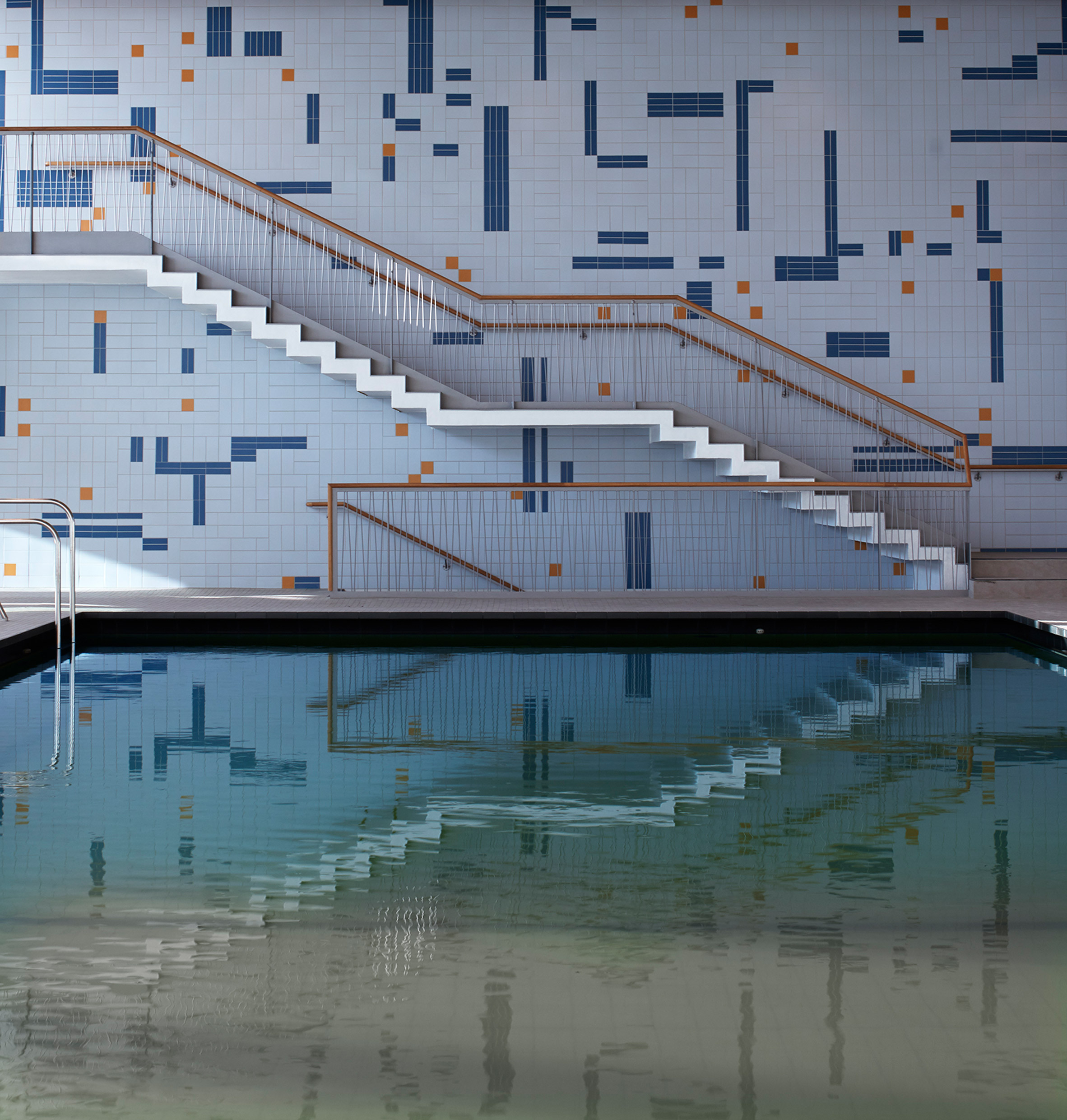 “The L-shaped structure of the building with its north and east wings appears rather simple, but the rectangular outdoor pool with the character of a lake is indeed extraordinary and gives the bath a unique selling point,” explained Burkart.

“The building’s main composition, with its two wings and the outdoor swimming pool, bears a consistent signature,” he continued.

“We have retained this characteristic form and reinforced it by extending the east wing with an annex.” 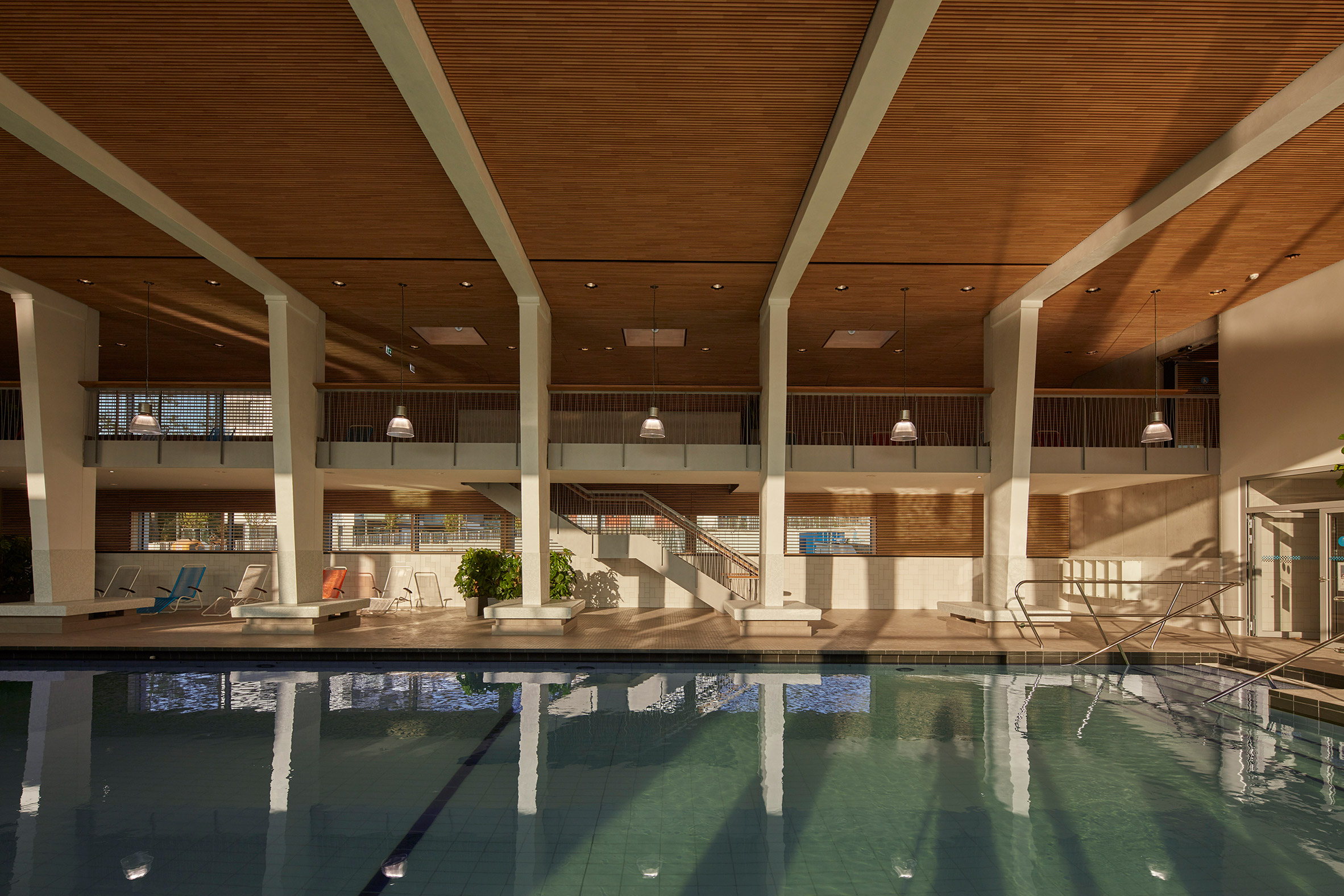 Both of the wings were largely enclosed with full-height glazing, which brings light into the indoor pools and other spaces.

Throughout the interiors, 4a Architekten aimed to create a calm atmosphere by combining exposed concrete, wooden slatted ceilings and muted colours. 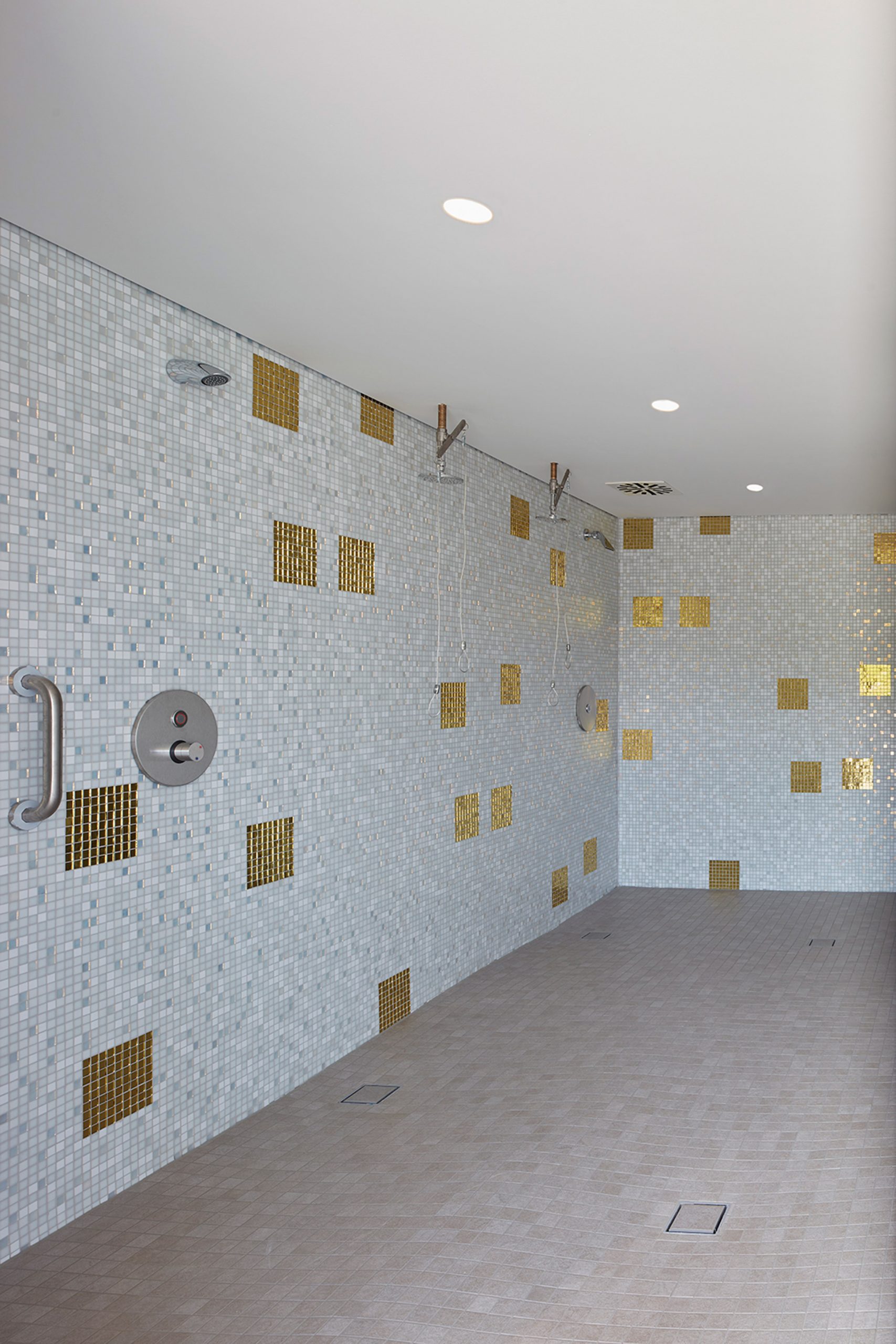 Cable pull switches were reinstalled in the showers

The calm colour and material palettes were combined with pops of colour and character provided by tiling and elements retained from the previous building.

Wooden lockers were reinstalled and glass artworks incorporated into the foyer and new training pool.

In the main indoor pool, the studio collaborated with Stuttgart artist Matthias Kohlmann to create a “graphically designed tiled wall”, which references a previous design in the building. 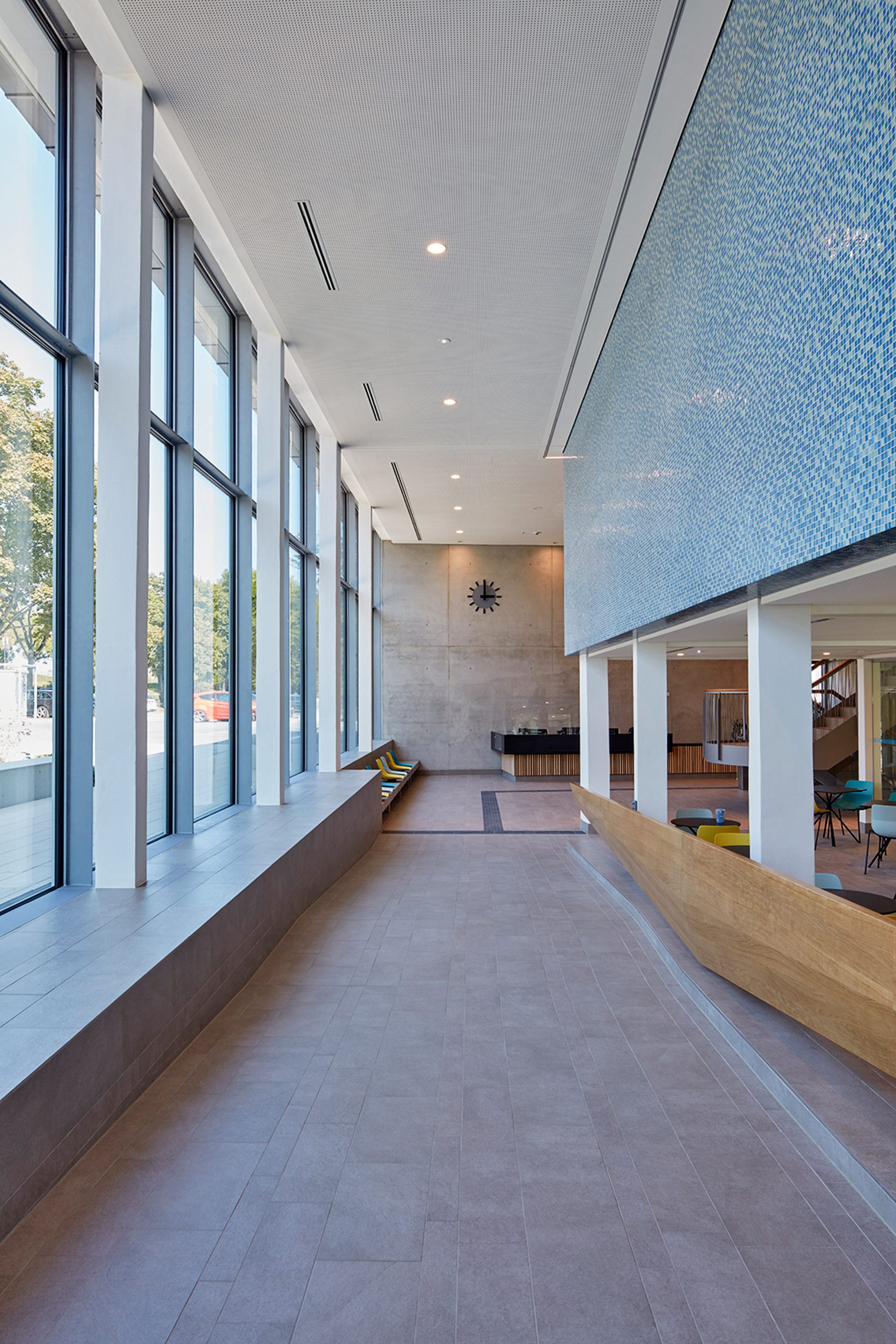 Interiors combine muted colours and elements from the previous building

“We took particularly characteristic elements from the old bath, restored and reinstalled them to take up the old charm,” said Burkart.

“Examples are the wooden locker rooms, the special cold water showers with cable pull switches as well as the pendant lights in the bathing hall and the wooden loungers in the outdoor area.” 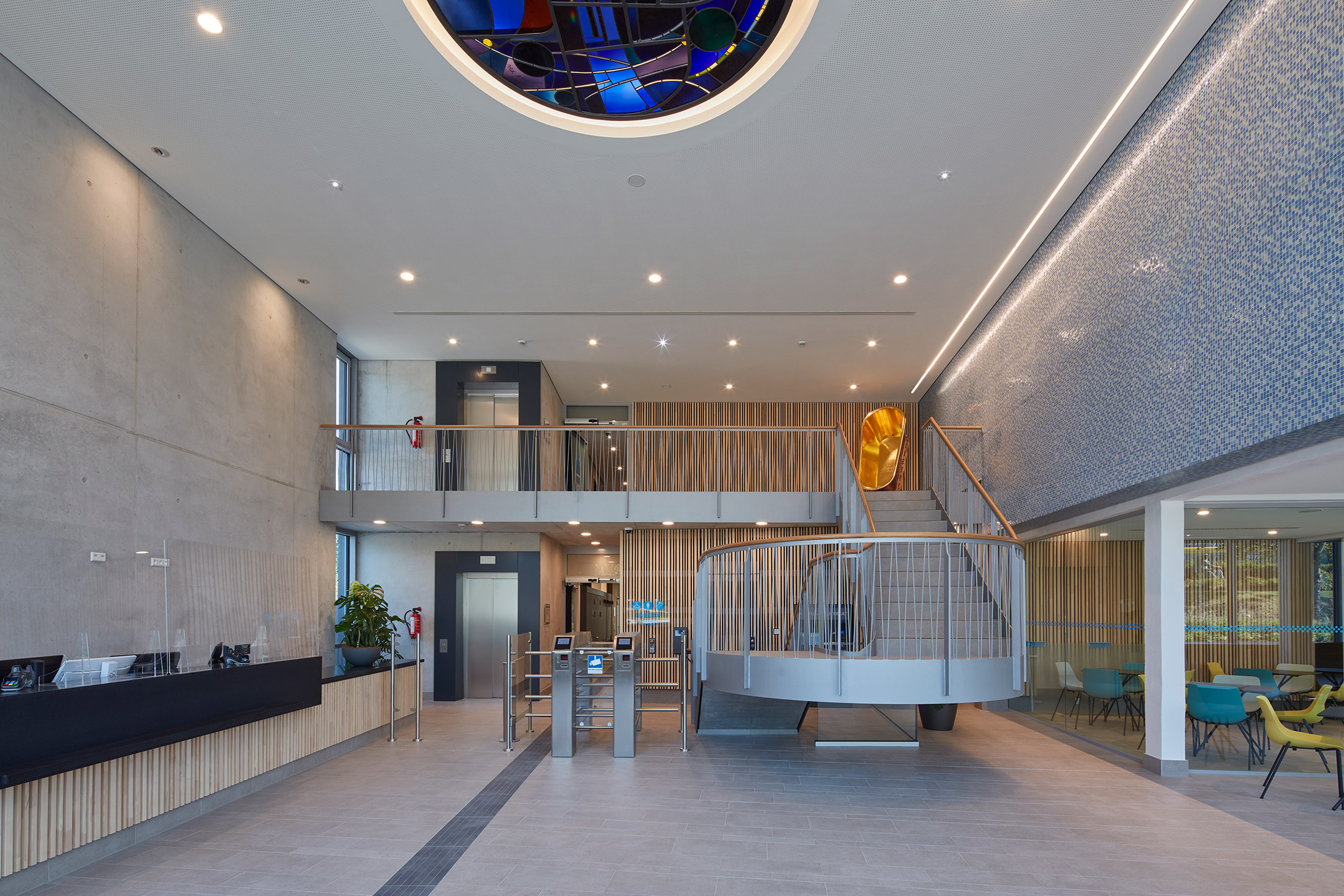 Along with modernising the facility, Burkart hopes that the studio’s design has also retained the original building’s character.

“I think we have succeeded in capturing the old charm and at the same time redesigning the bath in a contemporary way, and we are very happy about that,” he said.

“Especially since I, as a passionate ‘Bergianer’, can now relax and take a dip in the sparkling mineral water again – because ultimately, the main attraction in Bad Berg is and remains the special mineral water.”

The new pool includes a glass artwork from the old structure

Previous swimming pools published on Dezeen include a geothermal bath on the Icelandic seafront and a leisure centre designed by White Arkitekter that is perched above a fjord.

Photography is by Uwe Ditz.