As a video game, Aliens: Fireteam Elite does absolutely nothing special, original, or, really, memorable. That doesn’t mean it’s not a good time, though.

This debut effort from Cold Iron Studios is decidedly more for fans of Aliens than Alien, which is to say it leans on sci-fi action over sci-fi horror and your arsenal is the functional main character. If you want to creep around and feel the tension of a cat-and-mouse chase, there are other Alien-inspired games to shove you to the edge of your seat.

Fireteam Elite isn’t that, though. It’s about shooting, and plunging you into the power fantasy of standing firm against a horde of marauding Xenomorphs as you mow them all down and live to fight another day. Also, upgrading your guns. After all, the only thing better than a dead Xenomorph is a dead Xenomorph you shot with a gun that’s more powerful than the last one you used.

This is a game that isn’t shy about embracing its influences, which is to say modern shooting games that thrive when multiple players work together against an outsized threat. A typical level sees you running through a series of corridors — watching for intel and other collectibles along the way — until you reach a larger open space where you’ll have to settle in and fend off waves of incoming enemies.

Fireteam Elite only rarely futzes with that framework, and even when it happens the impact is typically no more involved than a couple extra buttons to push or positions to defend. It’s not until the very last moments of the final campaign — there are four in all, each three missions long — that Fireteam Elite offers a taste of something genuinely different.

It’s a strong enough sequence that I came away wondering what a few more set pieces might have done to elevate this game. The biggest problem Fireteam Elite has is its dogged commitment to doing just one thing, over and over. Once you clear all four of the stories, a “Horde Mode” unlocks that takes all of the defend-your-position locations from the campaigns and lets groups of up to three players tackle increasingly difficult waves of enemy threats.

‘Aliens: Fireteam Elite’ does absolutely nothing special. That doesn’t mean it’s not a good time.

The reward for all of this gunplay is the basic building block of any hook-dependent shooter: experience points (XP). You earn it for everything. Like a particular gun? Use it over and over and it’ll level up, unlocking slight stat boosts. Favor one character class over another? Same deal; gain XP, level up, apply new perks that soup up your abilities.

Yup, Fireteam Elite does the class-based soldier thing, with each option bringing a different set of skills to the mix. The Gunner gets grenades and a potent ability that speeds up the whole team’s rate-of-fire, a great tool for bringing down larger threats. The Demolisher comes packing heavy weapons (like the M56 Smart Gun!) and a missile barrage ability. These two are the clear-cut heavy-hitters, and they’re the classes most action-loving players will likely flock to.

More support-focused options have their uses too, though, especially if you’re playing in a group. The Technician comes packing a deployable turret and specializes in crowd control. Recon, which puzzlingly unlocks only after you complete all four campaigns, can send out a drones that reduce the damage enemies can do or refill ammo and restore health with each kill.

My preferred class, Doc, stands out from the pack because of the rules governing its chief tool, a group healing device. The deployable healing station only has so much charge before it stops working, but it recharges during a mission whenever the Doc picks up a fresh health kit. Health kits don’t appear too often and anyone can grab one, so squads that bring a Doc along benefit most when they communicate and grab those few and far between health kits strategically.

I’m diving deep on the classes, and the Doc’s standout status in particular, because it’s indicative of Fireteam Elite’s overall successes and failures in one swoop. Doc is built in a way that feeds into the cooperative focus of this game, with its main support ability tied directly to teamwork. But like so much else in Fireteam Elite, it’s a glimmer of something unique against the backdrop of an otherwise by-the-numbers shooter.

The other classes fill their roles, but they’re built to operate mostly independently of one another. Sure, abilities like the Gunner’s rate-of-fire boost help everyone, but not quite in a way that directly fosters cooperation. Worse than that, the quirk of recharging a Doc’s healing station isn’t ever explained outright. It’s something you’ll only pick up on if you take the time to read the text description in your loadout menu.

In so many other ways like this, Fireteam Elite rushes right up to the edge of being something truly special without ever fully nailing it. The environments you visit are big and beautiful, enhanced by H.R. Giger’s iconic Alien architecture and creature designs, but they’re lifeless. Static backdrops that look great in a screenshot but, ultimately, feel like just another corridor or room to shoot your way through. 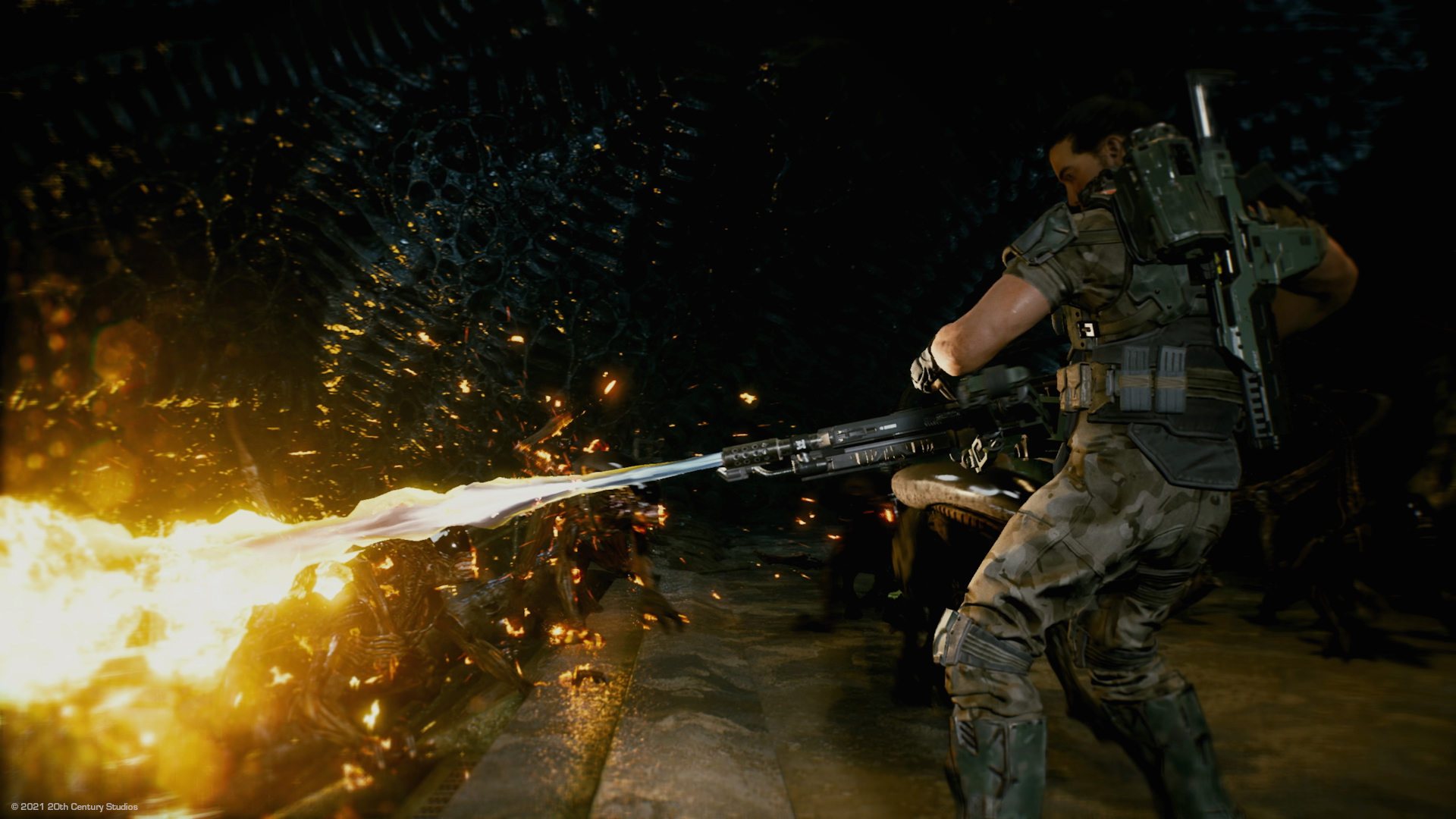 The stories, taken as a whole, stitch together the broader universe within the Alien franchise, linking up the familiar stories from the movies with a compelling and surprisingly detailed history. But almost all of this information is conveyed in boring conversations with the crew of the USS Endeavor, the spaceship you return to between missions. Just you picking questions off a list, listening to the response, and then moving on to the next question until the list is exhausted.

For the attentive Alien fan who’s seen every movie, these exchanges are rich with detail and substantive links back to major story points. But for a game that is driven entirely by action, these between-mission dives into franchise lore amount to a momentum-killer. Just like that game-ending set piece, the attention to detail here and in the art design makes me ponder what a more story-focused version of this game might have looked like. But that’s not what we got in Fireteam Elite.

It extends to the gameplay, too. Regardless of the class you run with, every player has the ability to build up a stockpile of deployable gear that can help during defensive scenarios. These one-use-and-done turrets, mines, and ammo upgrades offer players an extra edge in any fight, especially since you control over when most defend-the-point objectives start. But that consumable gear also tends to get used up or destroyed too quickly, and navigating through menus in the middle of a fight that you can’t pause makes it less than convenient to lean on such gear during longer encounters.

The end result is…ambivalence. I spent an enjoyable 10-plus hours digging into Cold Iron’s take on a Hollywood franchise that’s never quite managed to live up to its video game potential. This is one of the better examples, even; its commitment to roping together the sprawling Alien lore is impressive and the action-packed gameplay is made all the more pleasing by an arsenal that feels great and sounds just like the guns you remember from the movies (that Pulse Rifle especially is a winner).

It’s not enough, though. Mostly because it’s never been enough. Aliens: Fireteam Elite is definitely going to find its fans, and those fans will have a great time. But by-the-numbers shoot-and-run-and-shoot-some-more gameplay that, again and again, steps right up to the edge of being special without ever crossing over is its undoing in the end.

Aliens: Fireteam Elite is out on Aug. 24 for PlayStation and Xbox consoles, and Windows via Steam.