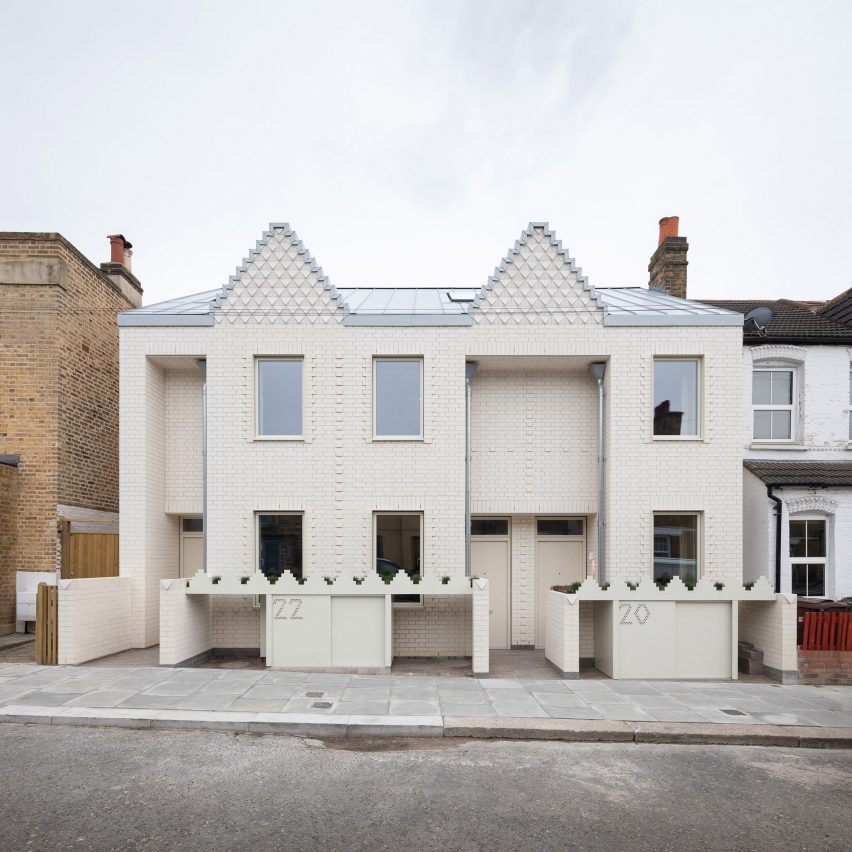 London studio Fraher & Findlay acted as the client, architect and contractor for the project, which replaces a detached late Victorian house and an adjacent car park and is intended as a prototype for future infill projects. 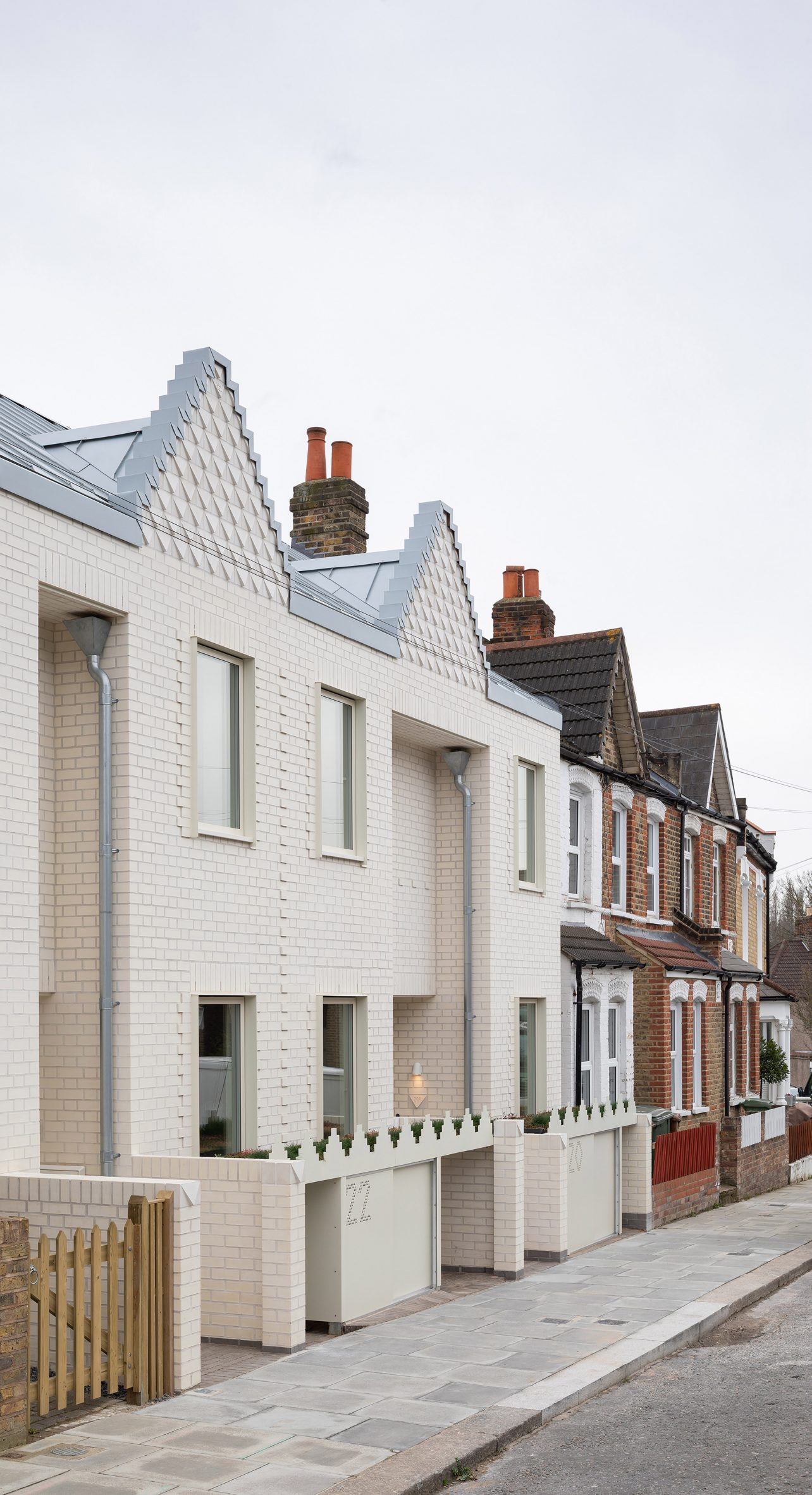 The form of the Ghost Houses was led by a concept of “casting” its neighbours – creating deep reveals where they have projecting bays and mimicking their brick detailing in an all-white design.

The gable of the roof is mirrored in a run of miniature gables atop the front yards of the homes, where a perforated cast-concrete pattern creates large door numbers.

“With so much argument and confusion about what is an appropriate contextual response and how a new building should reflect its context, we almost wanted to create a veil that didn’t try to be something else,” Fraher & Findlay partner Lizzie Fraher told Dezeen. 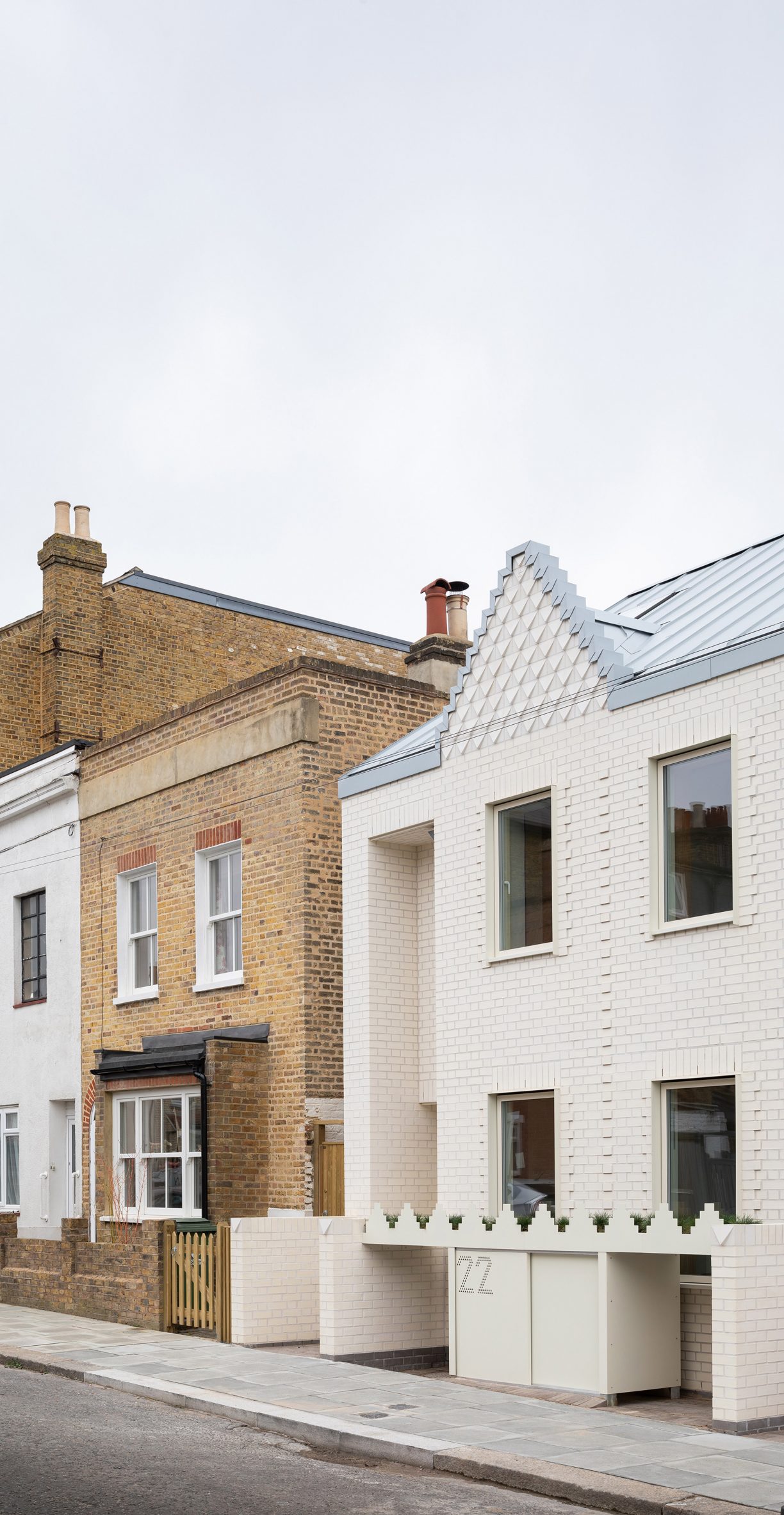 Grappling with narrow floor plans, the layout of the Ghost Houses has been designed as a challenge to typical terrace-home layouts, which the practice described as “often dark, long and inefficient.”

“There is often very little flexibility in how we conceive what is a comfortable, ‘habitable’ space,” Fraher said.

“We wanted to design spaces that were not the conventional proportions that you expect of a home.” 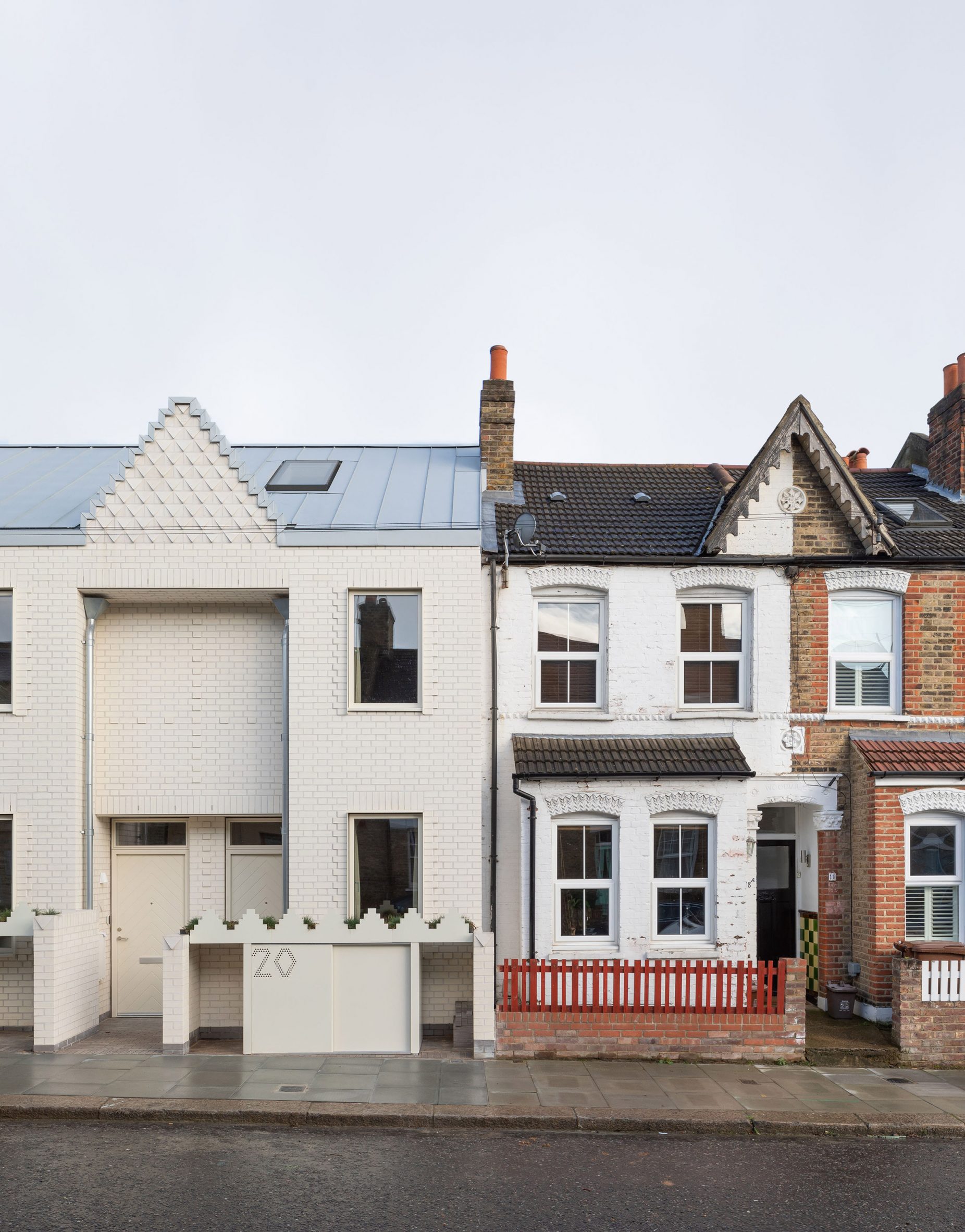 They are designed to resemble casts of their neighbours

Several elements aim to bring in this sense of space and light. Each of the long, thin floor plans is opened up by a “social staircase” at its centre, panelled with oak and featuring perforated-metal landings to allow visibility between floors.

At ground floor level, the spine of each house has become a long corridor that frames views of the garden as soon as you enter, illuminated by a large skylight.

Facing the street is a snug and study space, while at the rear of the home the floor level drops to maximise the ceiling height of the kitchen, dining and living space.

It steps back up to the level of the garden via wooden steps which double as informal seating. 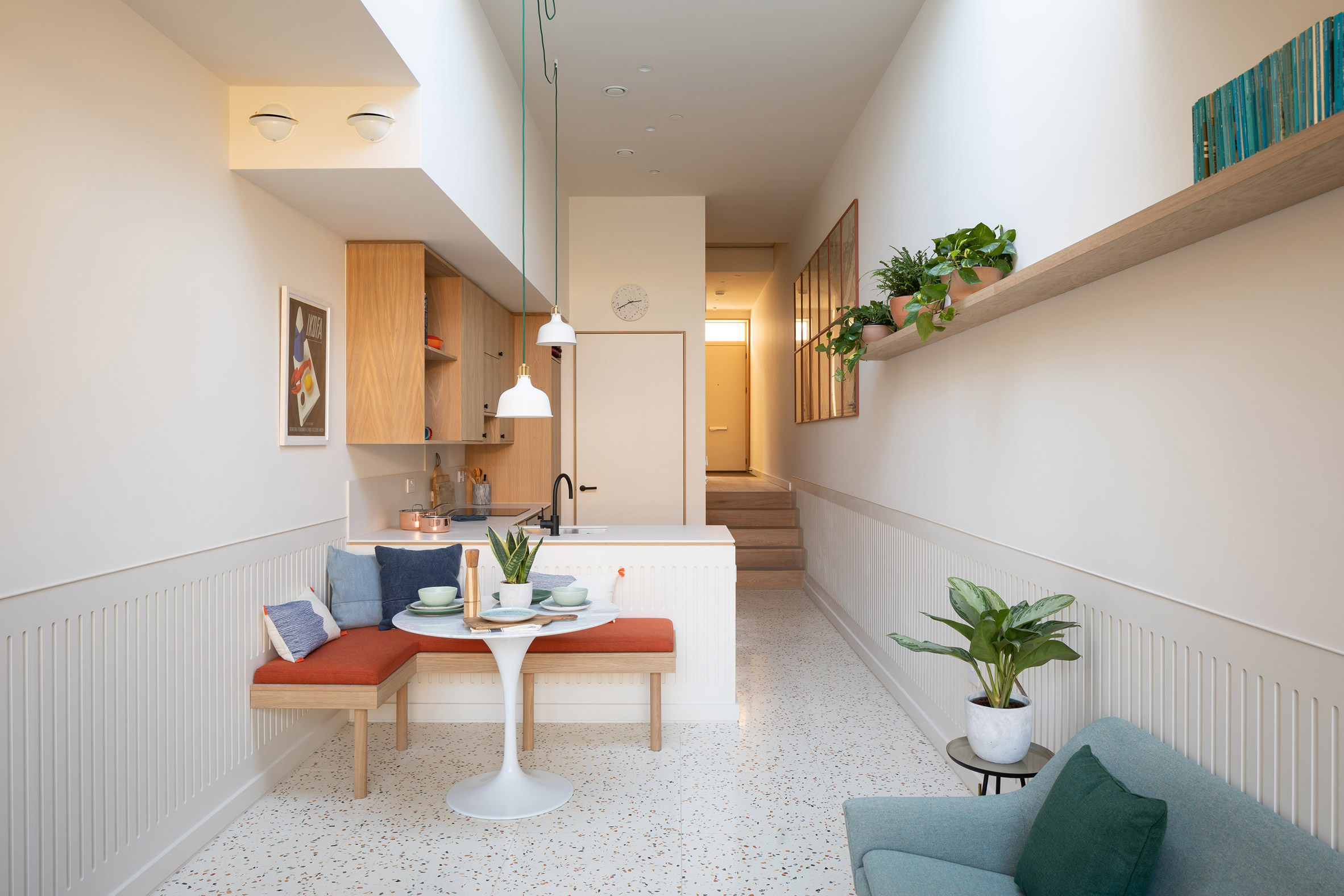 Two bedrooms and a bathroom occupy the first floor, and a smaller attic space contains an additional bedroom and study area.

Computer-modelled and CNC-cut joinery has been used for the white and pale-wood interiors, while zinc was chosen as a roof finish to further the building’s “ghostly” appearance. 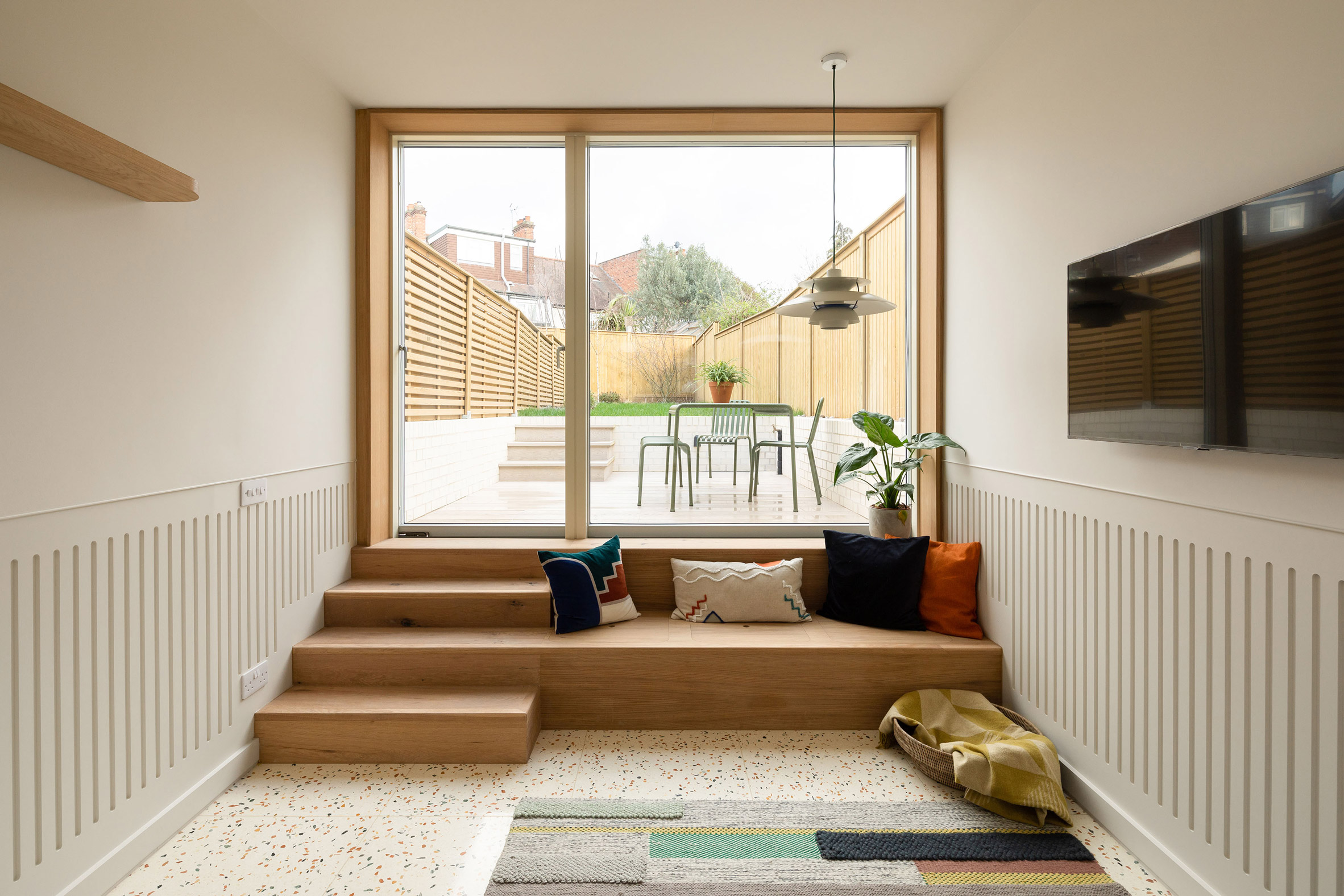 Views of the garden are framed through large windows

Other projects by Fraher & Findlay include the extension of a house in South London by the architect Walter Segal, which follows the self-build principles of the existing home.

The photography is by Adam Scott.