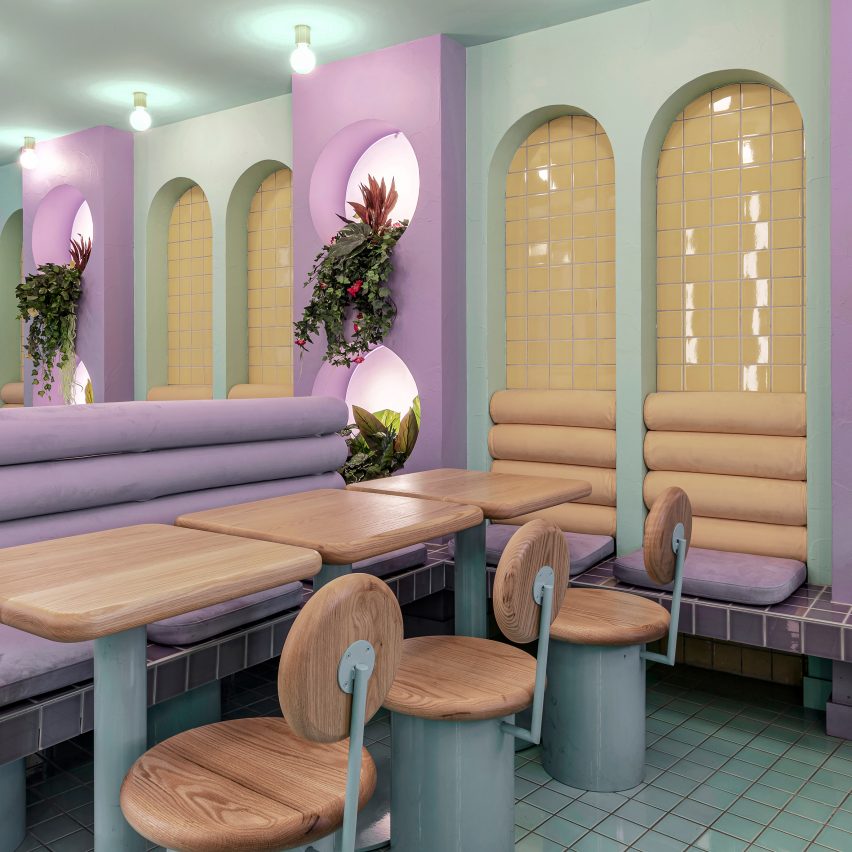 Called Piada, the restaurant sells Italian flatbreads and is the second of its kind to be designed by Masquespacio in the French city of Lyon. 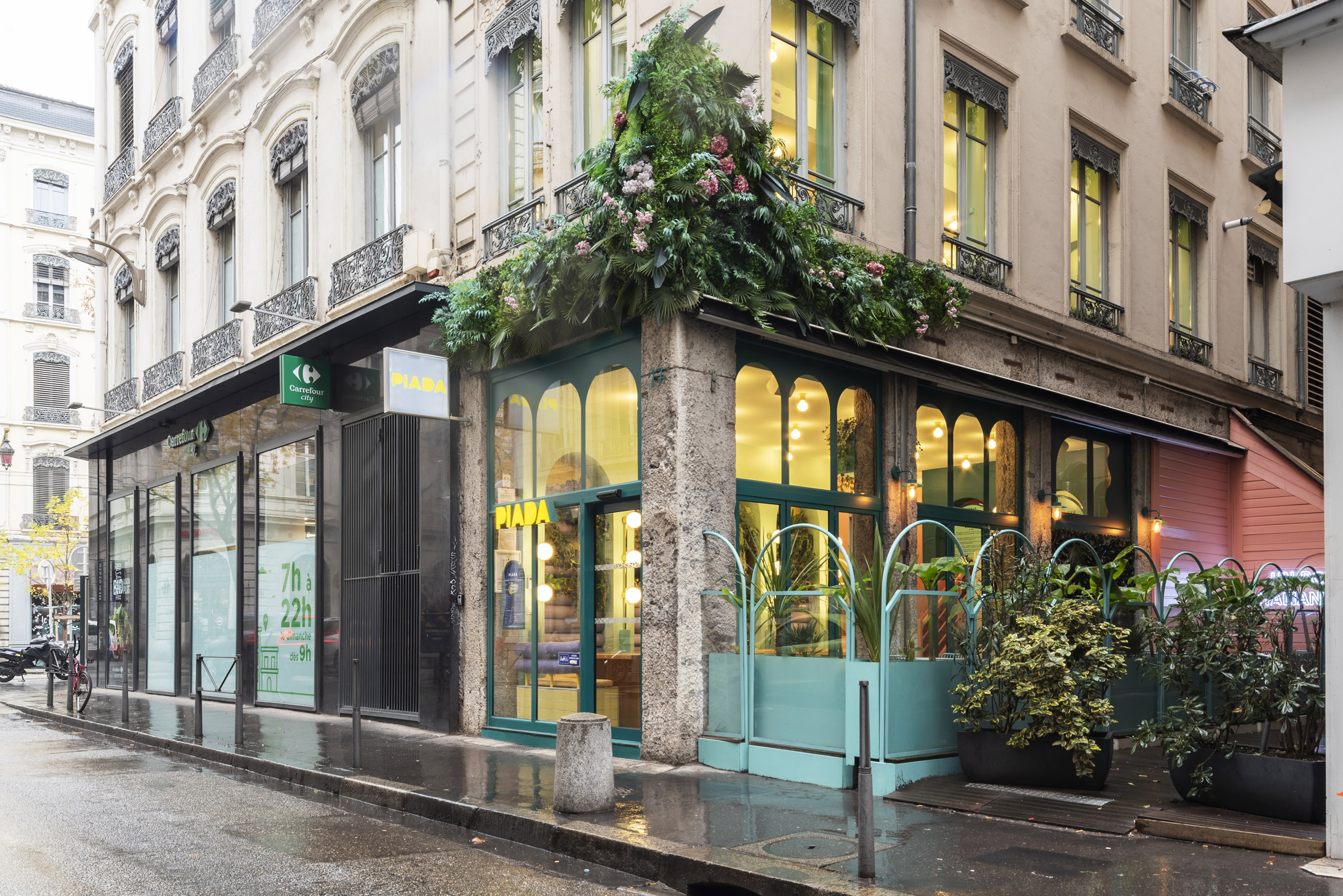 Piada is a restaurant in Lyon

The interiors of the latest Piada blends retro design elements borrowed from traditional Italian restaurants, such as marble and gold finishes, with colours and materials that were chosen to echo the eatery’s healthy food menu. 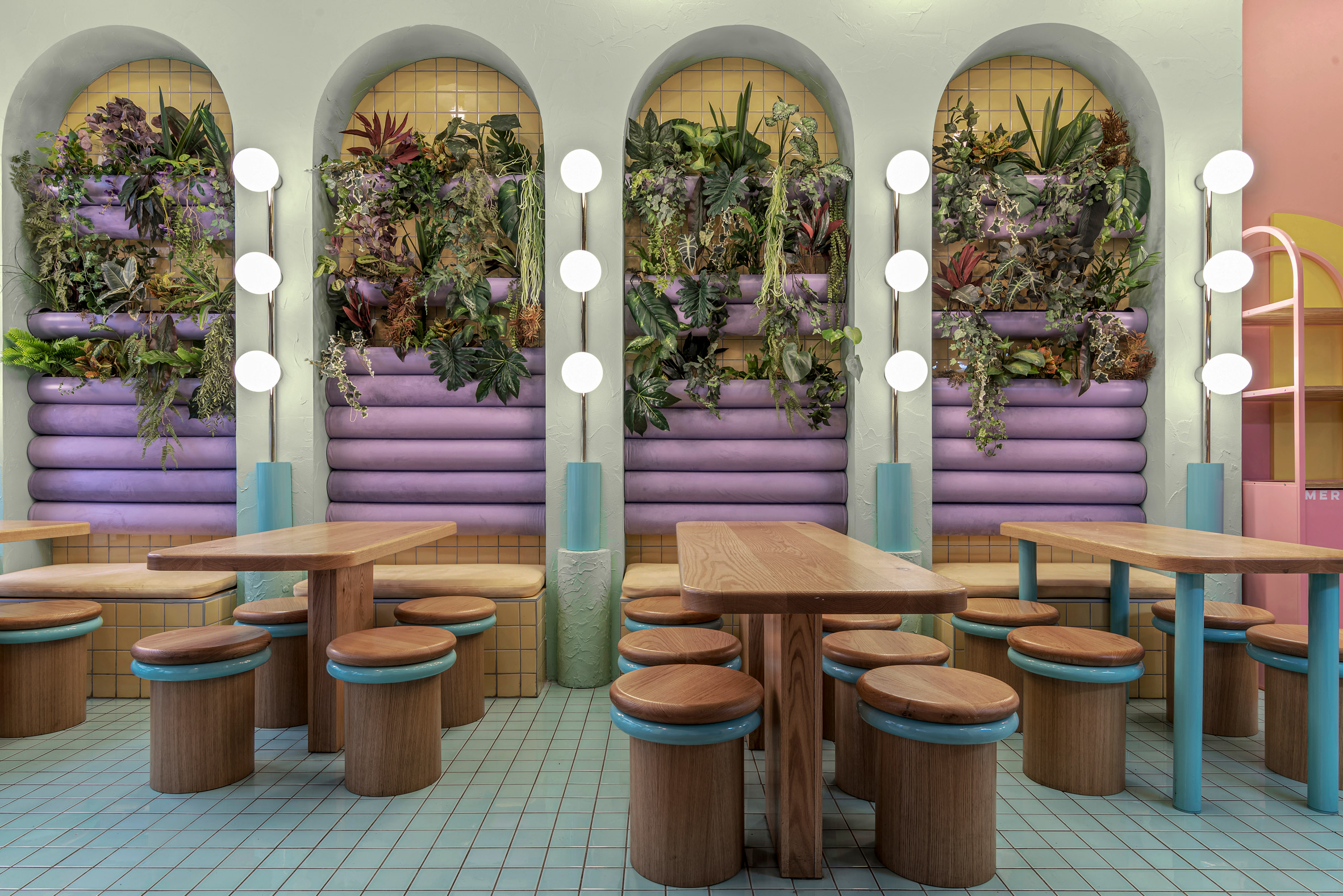 “Then, we sought elements that could represent a sort of healthy aspect, which at the same time have a splashy and young colour concept that represents the brand’s identity,” he added.

A garland of lush plants and flowers is suspended above the entrance to the two-storey restaurant, under which floor-to-ceiling arched windows were designed to draw visitors in from the street. 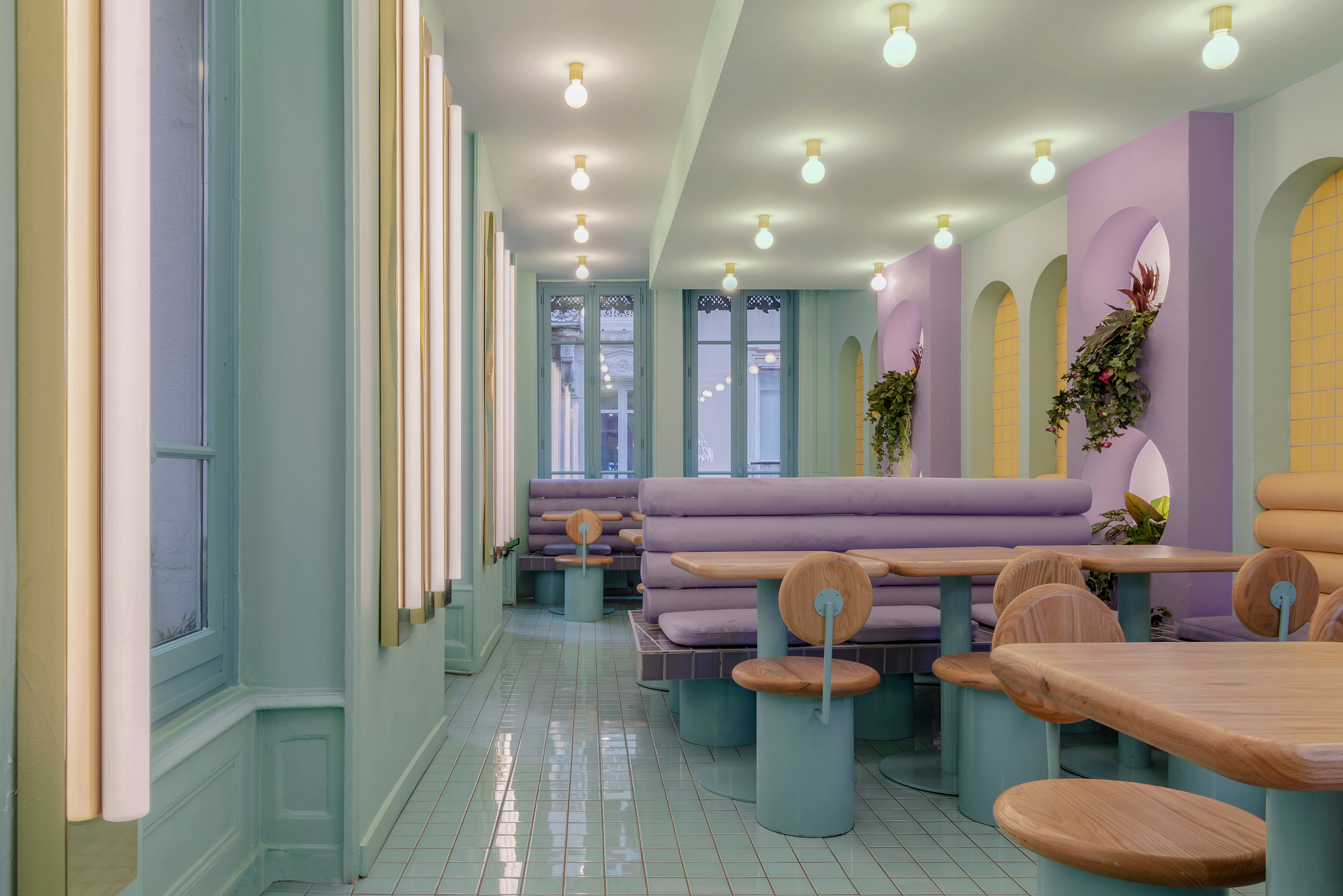 Inside, guests are met with a collection of booth-like tables that offer a mixture of built-in seating, including banquette benches and rounded wooden stools.

This area is defined by a bold palette of sugary pastel colours, ranging from pale lilac seat cushions to mint-green walls. 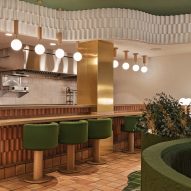 Piada’s external arch motif is also continued in its interiors, where curved alcoves have been outlined with columns of bulbous sconce lights that resemble oversized Hollywood-style mirrors. 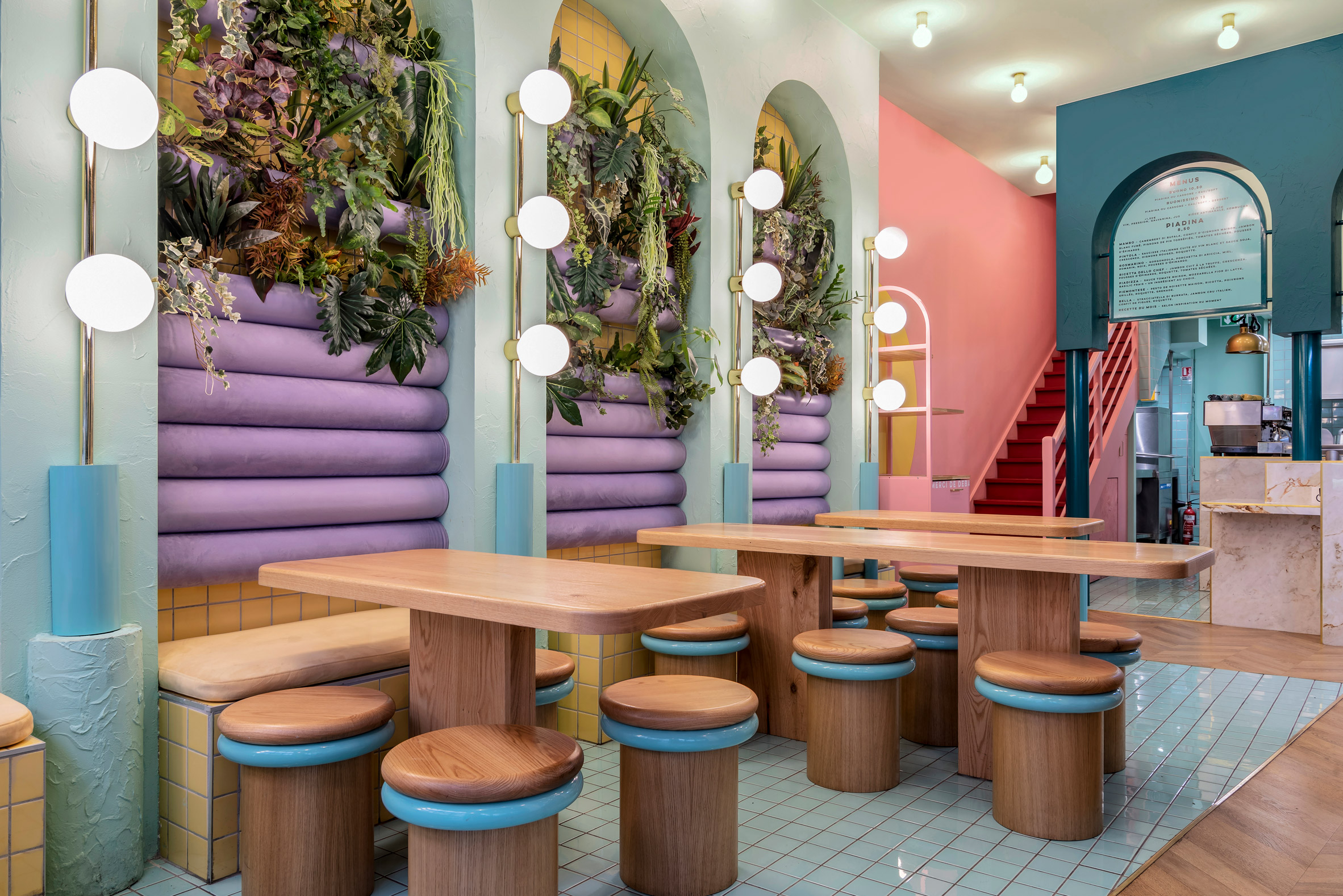 Piada’s design is also influenced by its healthy food menu

In a nod to Piada’s healthy food concept, Masquespacio added clusters of plants that spill out of backlit rounded nooks behind the seating areas both upstairs and downstairs.

The studio also incorporated stucco on the walls and tiles with a handmade effect to create a more organic feel to the restaurant interior. All of Piada’s furniture was custom-made by Masquespacio to match the restaurant’s eclectic themes. 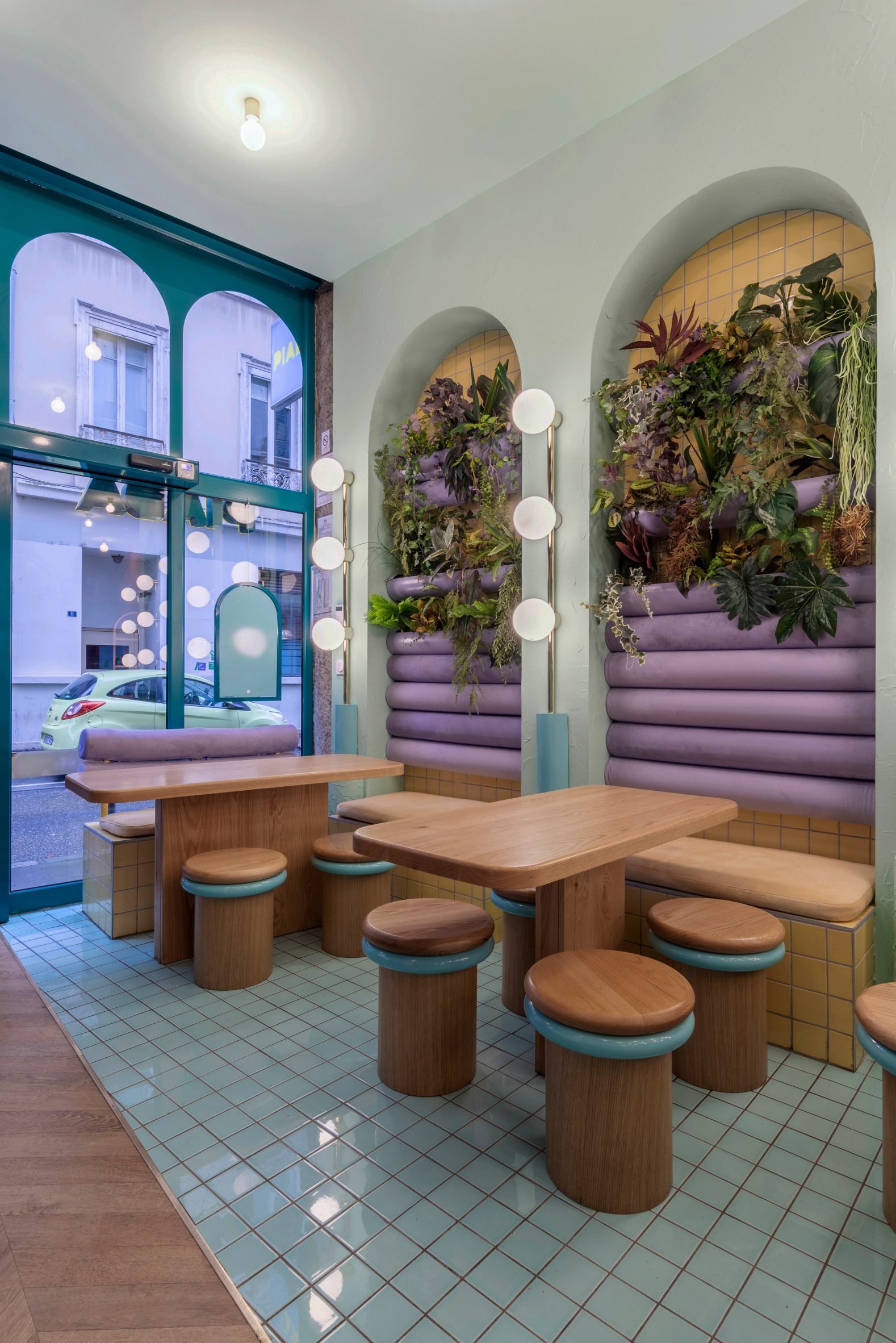 Founded in 2010 by Penasse and Ana Milena Hernández Palacios, the Spanish studio has completed a number of other interior projects with designs rooted in bright colour.

These include a playful burger joint in Turin, multi-hued student housing in Bilbao and a colour-clashing phone repair shop in Valencia.

The photography is by Gregory Abbate.