Intel's latest and greatest mobile processor, the 12th Generation Intel Core i9, is here, and so far, it's living up to the hype. For the last two week's I've been testing the MSI Raider GE76, a $3,999 gaming laptop that's loaded with the best components money can buy (and has a price tag to show for it).

There's a lot to like about the MSI GE76, like its sweet keyboard, RGB light bar and performance. But its overall cost and size is something that's sure to give most gamers a reason to wait for more laptops that are equipped with Intel's latest. There's more to it than that, of course. Below I'll dive into the finer details.

Here are the specifications of the MSI Raider GE76 I've been testing:

Gaming laptop design seems to fit into two different categories. There's the ultrathin crowd that blurs the line of performance and portability, and those that are unapologetically big and bulky. The Raider GE76 is firmly in the latter group. It's a big boy, weighing 6.39 pounds and measuring 15.63 x 11.18 x 1.02 inches. The 300W power supply isn't small either, so if you plan on carrying both around, you'll want to have an adequate backpack.

The titanium blue housing mixes a mostly matte finish with glossy accents on the lid. On the inside is a 17.3-inch full HD (1080p) display with a refresh rate of 360Hz. Above the display is a 1080p webcam that looks ok, but not great, for video calls. 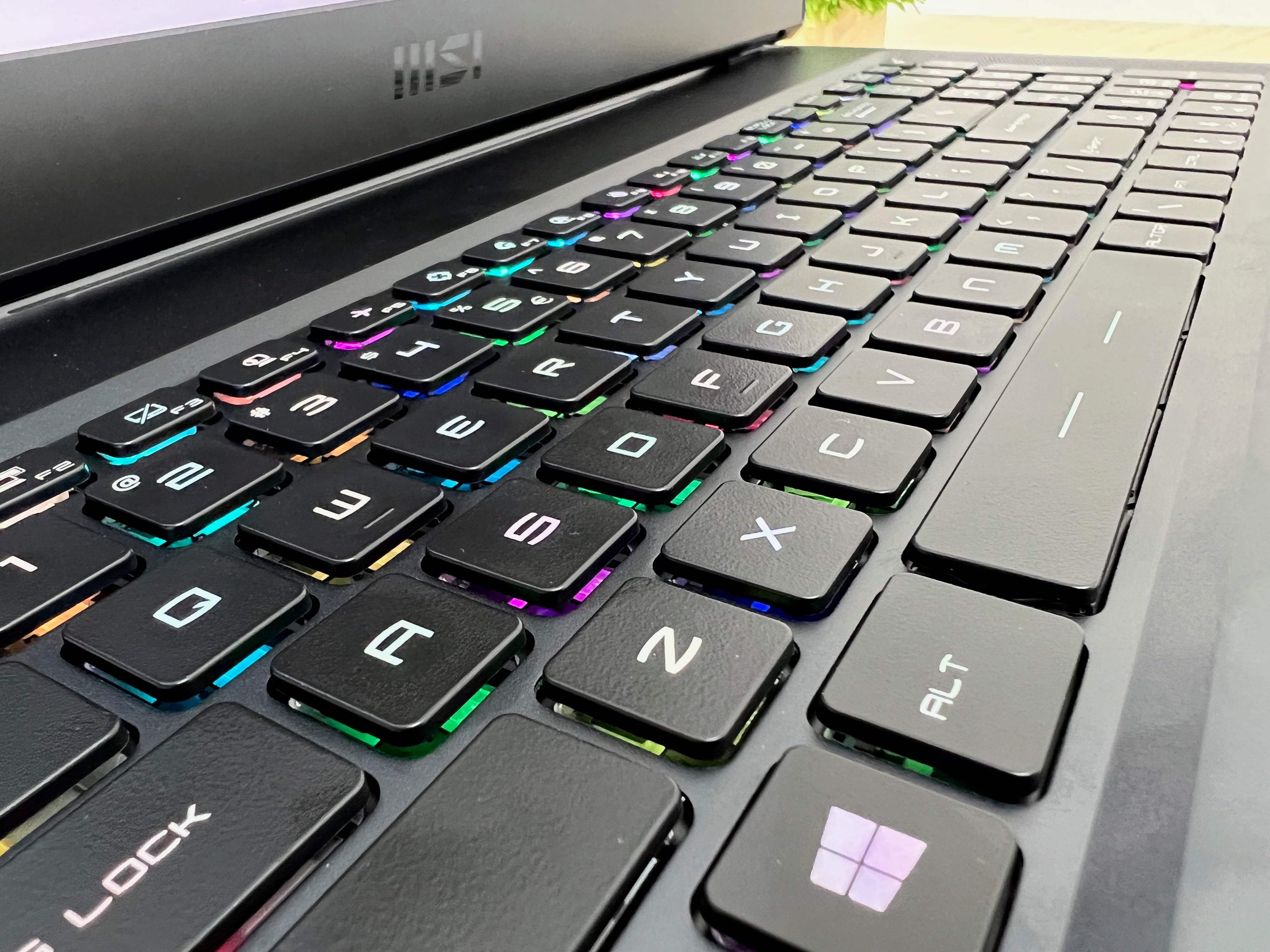 The full-size keyboard has individually lit RGB keys that you can fine-tune using the SteelSeries app, along with the Mystic light bar on the front edge of the housing. There's a number pad to the right of the keyboard, with an almost comically small trackpad just below.

The light bar pulses and stays lit up while the GE76 sits idle, giving your room a little bit of that RBG ambiance that most of us crave. 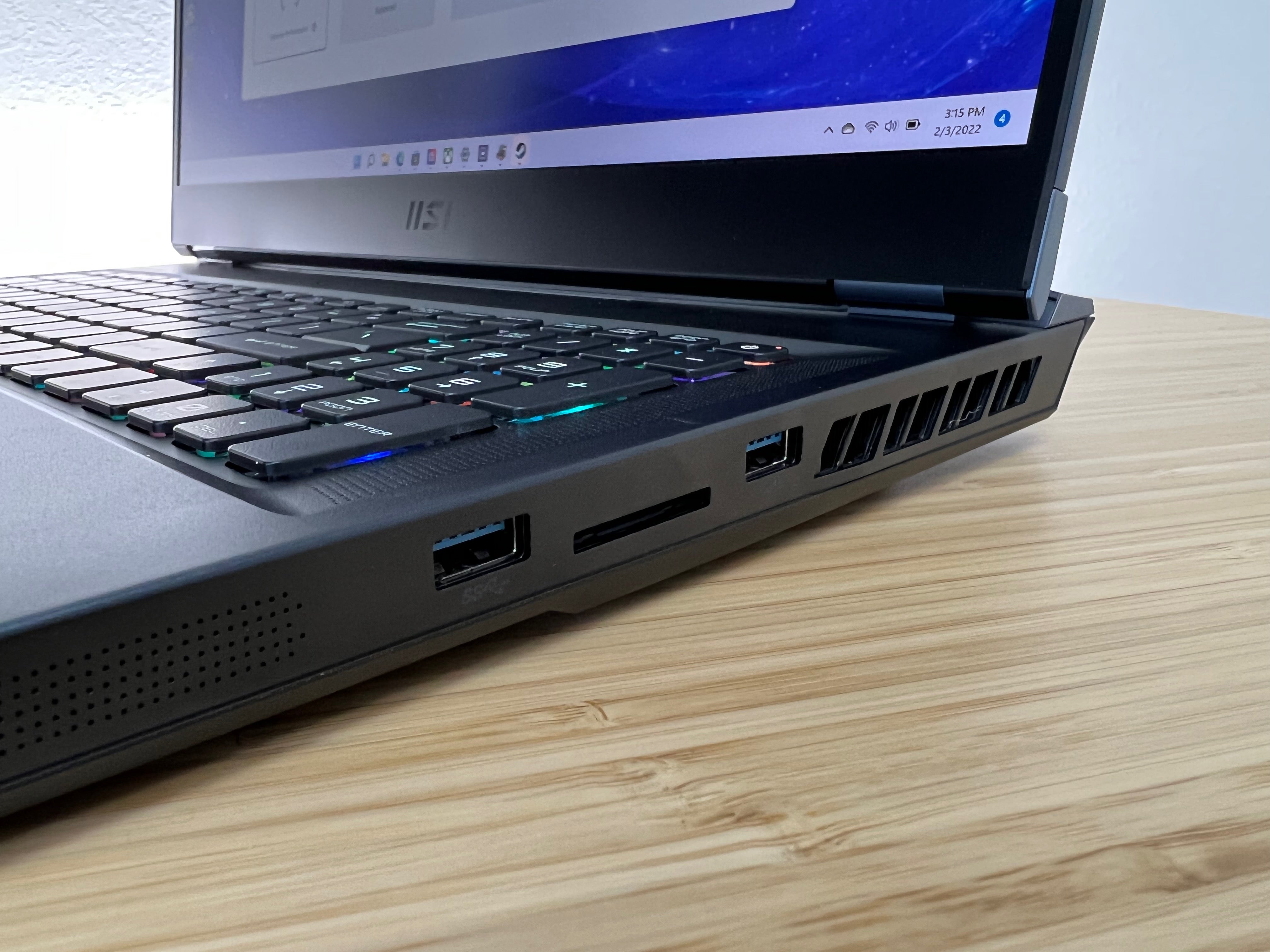 There are plenty of ports split between either side and the rear of the laptop's housing. On the right side are two USB 3.2 Gen 1 ports, with an SD card reader between them. On the rear is a miniDisplayPort 1.4 port, a Thunderbolt 4 port, an RJ45 Ethernet port, an HDMI port capable of 8K/60Hz output, and the charging port. Finally, the left flank of the housing has a USB-C (USB 3.2 Gen 2) port, a headphone jack, and a standard USB Type-A 3.2 Gen 2 port. 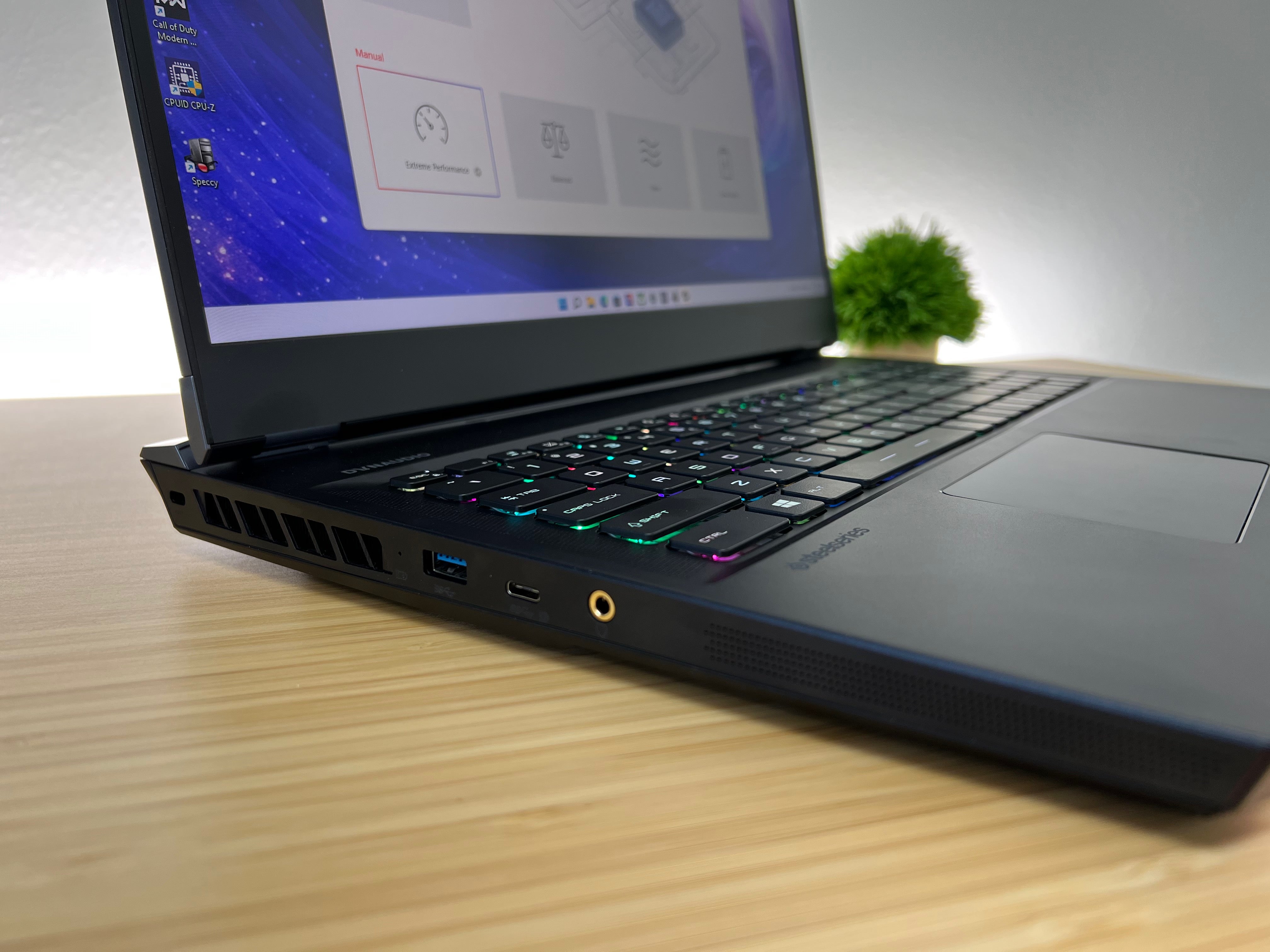 I like that MSI split up the ports across three different edges, with the more permanent type of ports on the rear — making it easy to wire a docking station-like setup on your desk. 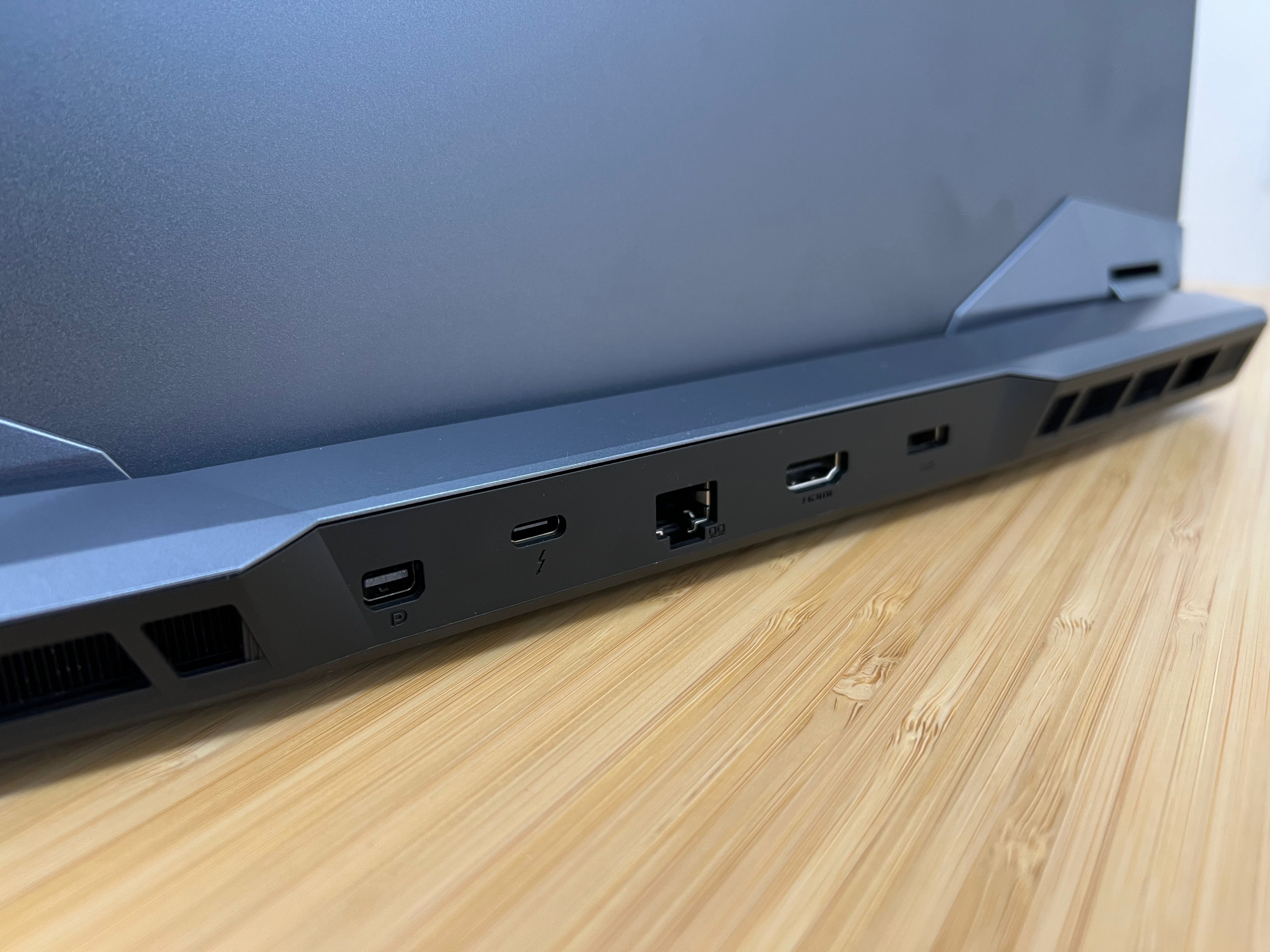 My favorite part of the GE76's design is easily the RGB keyboard and the Mystic light bar. Outside of that, the overall size is something you're either going to find acceptable because you don't need to carry it around all that often, or it's instantly going to be a nonstarter.

With the nerdy details out of the way, here's how the Raider GE76 stacks up against the Asus ROG Zephyrus S17 and Razer Blade 14 in IGN's standard benchmark suite of tests. These tests were run with the GE76 set to extreme performance mode.

As you can see from the screenshot, the performance boost of the MSI Raider GE76 over the S17 isn't as drastic as I had personally expected. It's roughly a 10% boost in performance in tests where the GE76 scored higher, which is a welcome increase, but not what I expected. As for the Blade 14 (which had an AMD Ryzen 9 5900HX), the performance gains are more significant.

Maybe it was a placebo effect, but when using the GE76 on a daily basis for the last couple of weeks, I felt like everything was much faster. Launching multiple programs at the same time saw no slowdown, and multitasking wasn't something I had to think about.

As for gaming, the GE76 lived up to my expectations. Well, save for the display. The IPS display's color was more muted and lacked that bright and vivid look I've come to expect from high-end gaming laptops. After tinkering with the display's tuning a bit, it looked better, but at this price, I was expecting more out of the box. 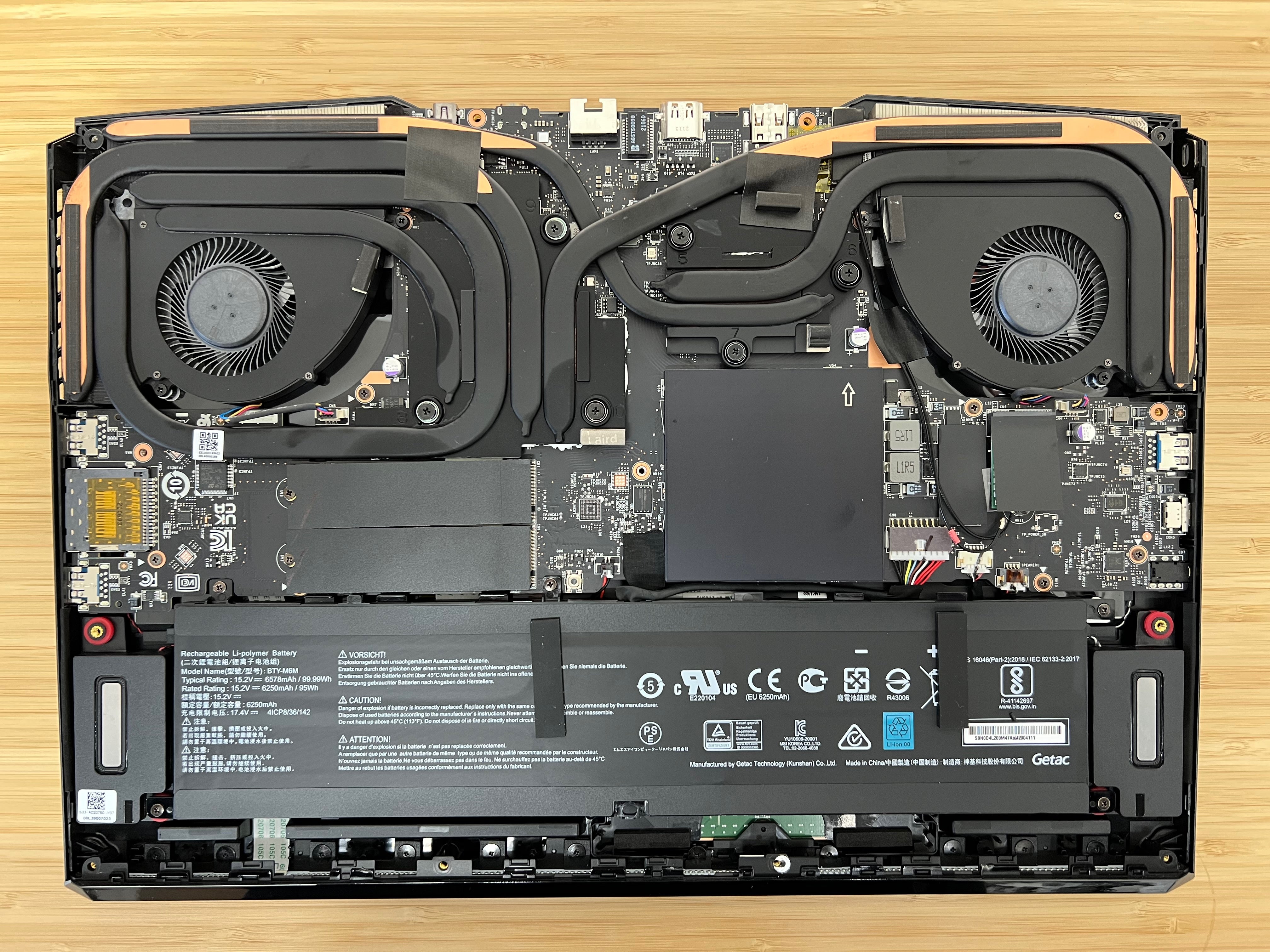 However, frame rates and the overall gaming experience was smooth and fast. Playing Warzone and Tom Clancy's Rainbow Six Extraction was quiet and enjoyable. The fans, even on extreme performance mode, weren't overpowering or too loud that I couldn't hear gameplay. Naturally, you'll want to wear gaming headphones so you can hear all of the finer sound effects and details.

I got those numbers by using the Xbox Game Bar to monitor the average FPS over the last 60 seconds. I would randomly look at the average, make a note of it, and then averaged those numbers at the end of my testing.

One other minor gripe about the GE76 is the spacing between the keys on the keyboard. It took me a few days to get used to the keys being further apart than what I'm accustomed to, which meant I was constantly reaching for a key and coming up short. It's frustrating while playing a game, but it's even more frustrating when writing an email or chatting with friends in Slack.

I used the PCMark 10 battery benchmark to test the battery life of the GE76, which mimics everyday office work like editing a word document, watching videos and the like. The GE76 lasted 3 hours and 37 minutes before powering off. That's not a horrible mark, beating out the Zephyrus S17 by a handful of minutes, but falling short of the Blade 14 by nearly two hours.

The Raider GE76 runs Windows 11 Pro out of the box. If you've never set up a new Windows 11 device, you'll be surprised (like I was) to see a prompt to restore the laptop using the last backup of a Windows 11 device that's linked to your Microsoft account. I opted to set up the laptop as new just to ensure it was properly set up for testing, but this Windows 11 feature is something I didn't even know was possible. I can't wait to give it a try. 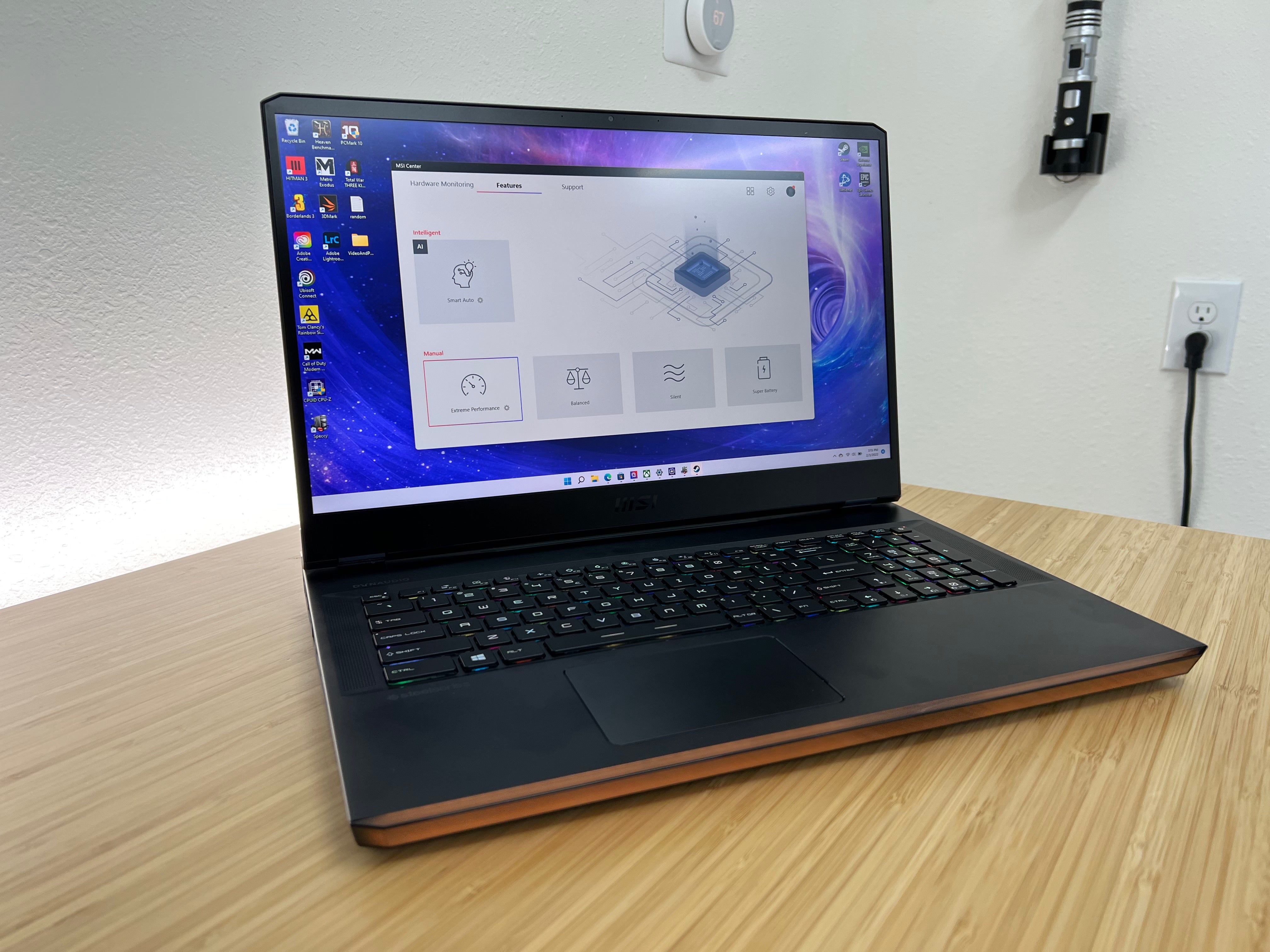 As for programs and apps that come preinstalled from the MSI factory, well, there are a few. You'll want to remove Norton Security, of course, but outside of that, the rest of the software lineup is actually useful.

SteelSeries GG is installed to help you control and customize the keyboard and light bar lighting. You can also jump into MSI Center to view system specs, stats and switch between cooling and performance molds like Extreme Performance and Balanced (Silent and Super Battery are also options). Alternatively, you can use Smart Auto to tune the system's performance based on what you're currently doing.

MSI doesn't have this specific build for sale on its site, but I can say if you want this exact laptop, it's going to cost you based on this $4,199 build that's currently out of stock. That build has the same processor, GPU and memory, but only 1TB of SSD storage and a 4K display.

Another issue? None of the Raider GE76 builds listed on the MSI site are in stock.