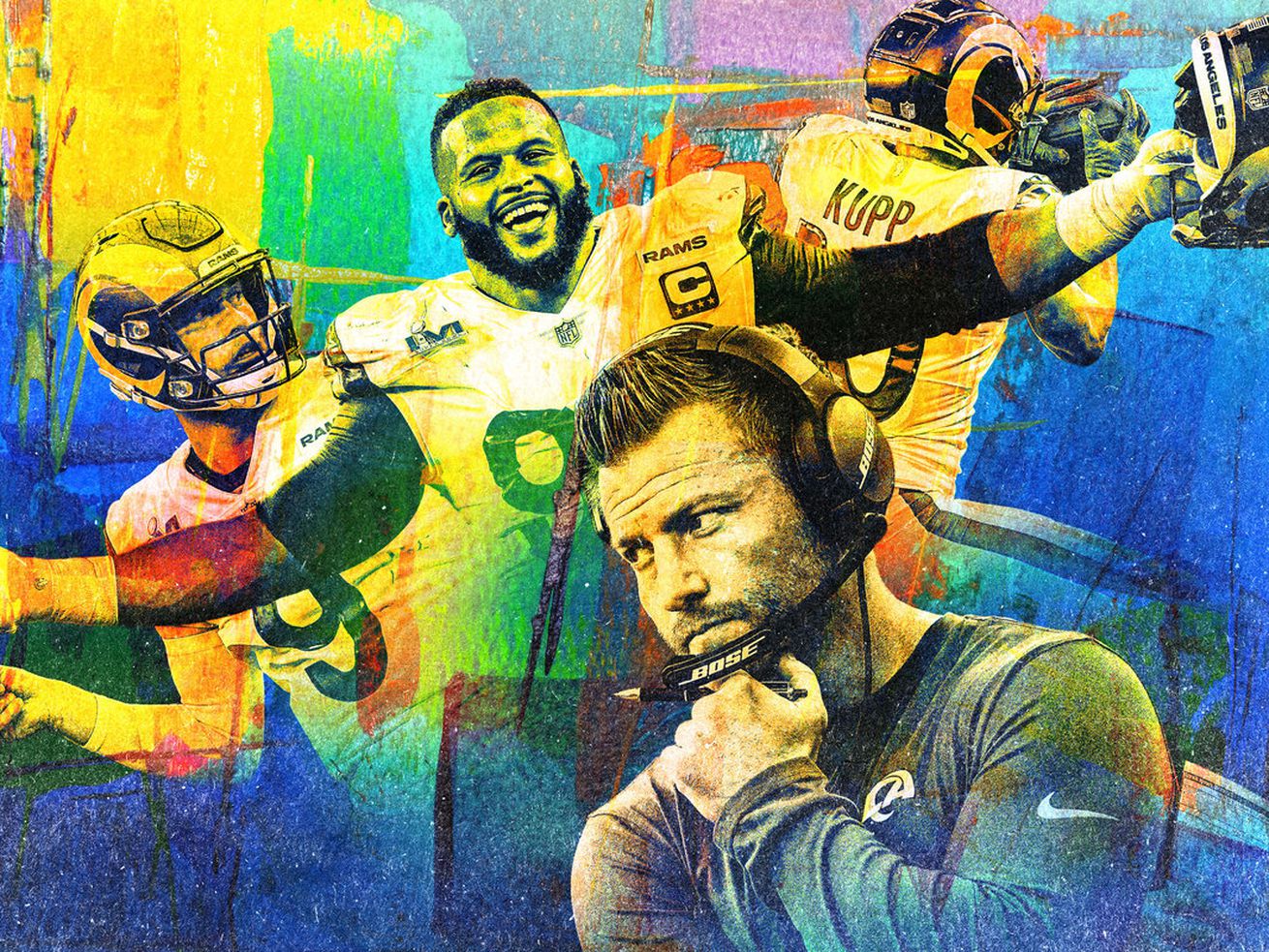 Sunday’s game was won by superstar players making championship-winning plays. It’s a good thing the Rams had so many of them.

Everyone in SoFi Stadium knew Cooper Kupp was getting the ball except for Kupp himself.

The Rams, trailing the Bengals 20-16, were facing a second-and-7 at around midfield with just over three minutes left in Super Bowl LVI. Sean McVay had dialed up one of his go-to route combinations: a short stop route from tight end Brycen Hopkins (88), meant to draw the defense up, with Kupp (10) running a deep in-breaker behind it. 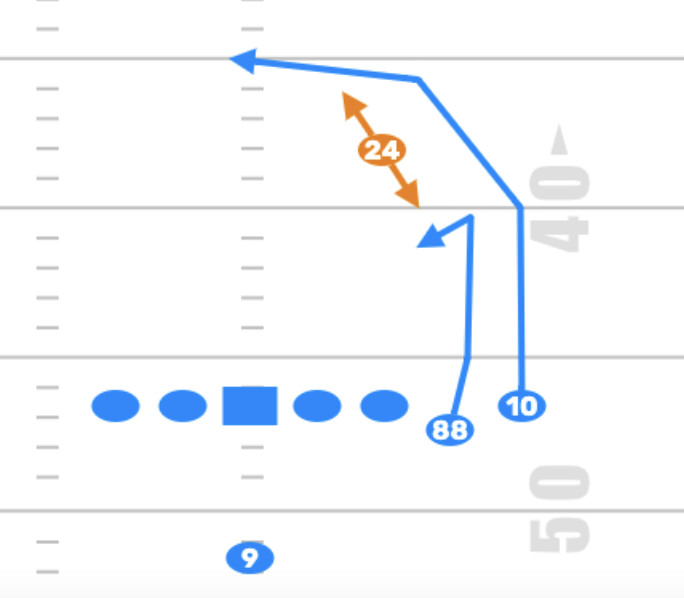 Bengals safety Vonn Bell (24) didn’t take the bait … not initially, at least. He lurked in the throwing window, waiting for the in-breaking route by Kupp until Stafford started his throwing motion. With the quarterback’s eyes locked in on Hopkins on the underneath route, Bell broke toward the second-year tight end. The ball went whizzing by his head right to Kupp, who was also fooled a bit by his quarterback’s eyes.

“Matthew Stafford probably threw the best no-looker of his life,” Kupp told NFL Network after the game. “I was running in there and I saw him lean a little, and I’m like, ‘Oh, he’s throwing this to me, isn’t he?’ He was looking up into the third level of the right sideline.”

With no throwing window available for Stafford to get the ball to Kupp, he had to create one with his eyes. The result might be the best throw in franchise history.

no look pass with the super bowl on the – only john matthew stafford pic.twitter.com/TtXFOjNUp8

It wasn’t the best play call of McVay’s career, but it didn’t need to be. Kupp, the NFL’s most prolific receiver, and Stafford, the quarterback the Rams had traded for just over a year ago, had their coach covered.

A few plays later, the two connected for the game-winning score in the Rams’ 23-20 win.

On the ensuing drive, it was Aaron Donald’s turn to play the role of superstar. First, the game-wrecking defensive tackle stopped Samaje Perine short of the sticks on third down. Then on fourth down, with the Super Bowl on the line, he brushed the Bengals left guard aside and wrapped up Joe Burrow, who made a desperate heave that fell to the ground.

And just like that, McVay added “Super Bowl–winning coach” to his already impressive résumé. But on the greatest night of his career, McVay didn’t put forth his greatest performance. He spared us his typical game-management mistakes—he actually did quite well in that regard—but his play-calling nearly cost the Rams a Lombardi Trophy. The team’s cast of superstars, led by Stafford, Kupp, and Donald, just wouldn’t let him give it away.

The coach who has been hailed as an offensive genius throughout his coaching career did not look the part, and you don’t need an advanced degree in X’s and O’s to figure out the problem.

The Rams have 0 successful carries (EPA > 0) on 18 carries, 1 of 4 teams to post a 0.0% rushing success rate in a game over the last six seasons, per @NextGenStats.The other 3 teams to do so all had single digit carries… https://t.co/e1a8VDcKdv

McVay just wouldn’t stop calling run plays on early downs. Per RBSDM.com, the Rams lost 10.7 EPA on 19 handoffs to running back; despite how ineffectual the run game was, McVay kept going to it. It wasn’t until the fourth quarter, when the Rams were trailing and in need of a score, that the 36-year-old head coach abandoned a run game that would average 1.9 yards per carry on the game.

I can’t say for sure why McVay was so intent on calling runs into a brick wall, but I have an educated guess. The Rams’ game plan was a throwback to the Jared Goff days. They ran a lot of plays from under center in hopes of getting the play-action passing game fired up. By halftime, L.A. had called five play-action passes from under center. Per Next Gen Stats, it averaged 6.5 such calls per game during the regular season. I assume that McVay thought it was necessary to establish the run in order to set up those play-action shots.

That line of thinking has been considered outdated for a few years now. The analytics nerds have found no correlation between volume of rushes and play-action success. The numbers show you don’t need to establish the run—whatever that means!—to open up that space in the passing game. And if you just watched the Bengals linebackers, and the way they attacked the line of scrimmage from the very first play of the game, you could see how unnecessary McVay’s loyalty to his ineffective run game was.

To be fair to McVay, the Rams offense was moving the ball quite well before a knee injury ended Odell Beckham Jr.’s night in the first half—he had two catches for 52 yards and a touchdown before exiting the game

The Rams were also without tight end Tyler Higbee, who was ruled out earlier in the week. Having already lost wide receiver Robert Woods in November, McVay was working with an offense made up of spare parts. But his play-calling didn’t make his job any easier. By wasting those early downs with ineffective runs, the Rams were making things easier for Bengals defensive coordinator Lou Anarumo.

In general, passing the ball is easiest on first down. That’s when defenses are still wary of the run and will play more base defense to help defend against it. With more linebackers out on the field and the threat of the run forcing defenses to be sound with their run fits, it’s harder to dial up special coverages that might include a double-team on a star receiver like Kupp. So by waiting until third down to pass, McVay was making things more difficult for his offense—especially with Beckham out and unable to punish Cincinnati for selling out to stop Kupp, as he did several times before leaving the game.

After Beckham left, allowing the Bengals to bracket Kupp on key downs, Stafford found himself passing to guys like Ben Skowronek and Van Jefferson in pivotal situations. One of those passes bounced off Skowronek’s hands and was picked off by the Bengals early in the second half. Cincinnati had just scored on its previous drive to take its first lead of the game and now had the ball on the Los Angeles 31-yard-line. A touchdown would stretch the lead to double digits. And that’s when the superstars took over the game and pretty much took it out of McVay’s hands.

Donald’s sack on third down forced a Bengals field goal to keep it a one-score game, 20-13. The Rams answered with a field goal drive of their own, highlighted by a big 13-yard reception by Kupp to move the chains on second-and-9. Von Miller, whom the Rams had traded for at midseason, killed another Bengals drive with a second-down sack that forced a third-and-22, and then notched another sack to force a punt on the ensuing Bengals possession.

Those crucial stops set up the 15-play, 79-yard touchdown drive that won the game. Kupp got the drive going with a clutch fourth-down run that picked up a first down after a slow start. Then he hauled in all four of his targets on the drive and drew two penalties that moved the chains. These weren’t clever play designs by McVay that got the Rams star open; in order to get Kupp the ball, Stafford had to pierce tight windows and, as we covered at the top of this piece, create his own throwing windows with his eyes. That game-winning drive wasn’t the product of good coaching, but rather of more talented players making championship-level plays.

Throughout the week, most analysts gave the Rams the edge in two key areas: coaching and talent. Having McVay on the sideline certainly did not feel like an advantage for L.A. Since taking over the team in 2017, his play-calling has been the engine powering the offense. In many ways, he is the face of the franchise, which is rare in a league dominated by quarterbacks. Coaches are supposed to put their players in the best position to make plays, and there hasn’t been a coach better at doing that than McVay in the past few years. That was not the case on Sunday, though. But luckily for the Rams coach, Donald, Kupp, and Stafford didn’t need him to.