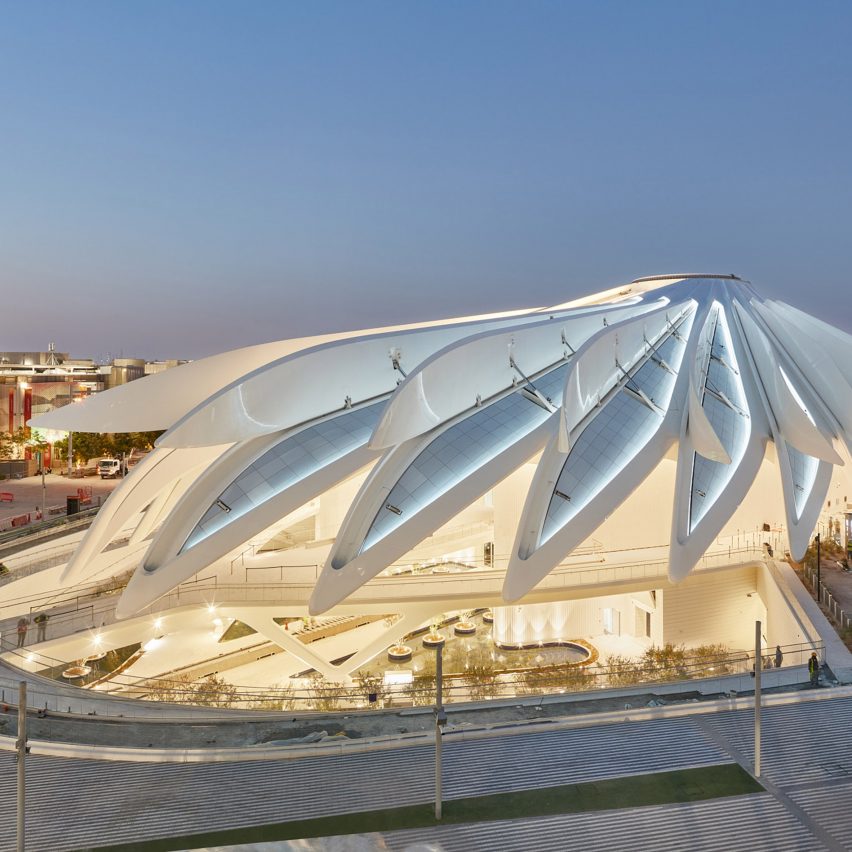 This week on Dezeen, we showcased architecture from Dubai Expo 2020, including the Qatar pavilion and the UAE pavilion, both designed by Santiago Calatrava.

The Dubai Expo 2020, which is currently ongoing in the United Arab Emirates after being postponed from last year due to the coronavirus pandemic, also features the UK pavilion designed by Es Devlin. 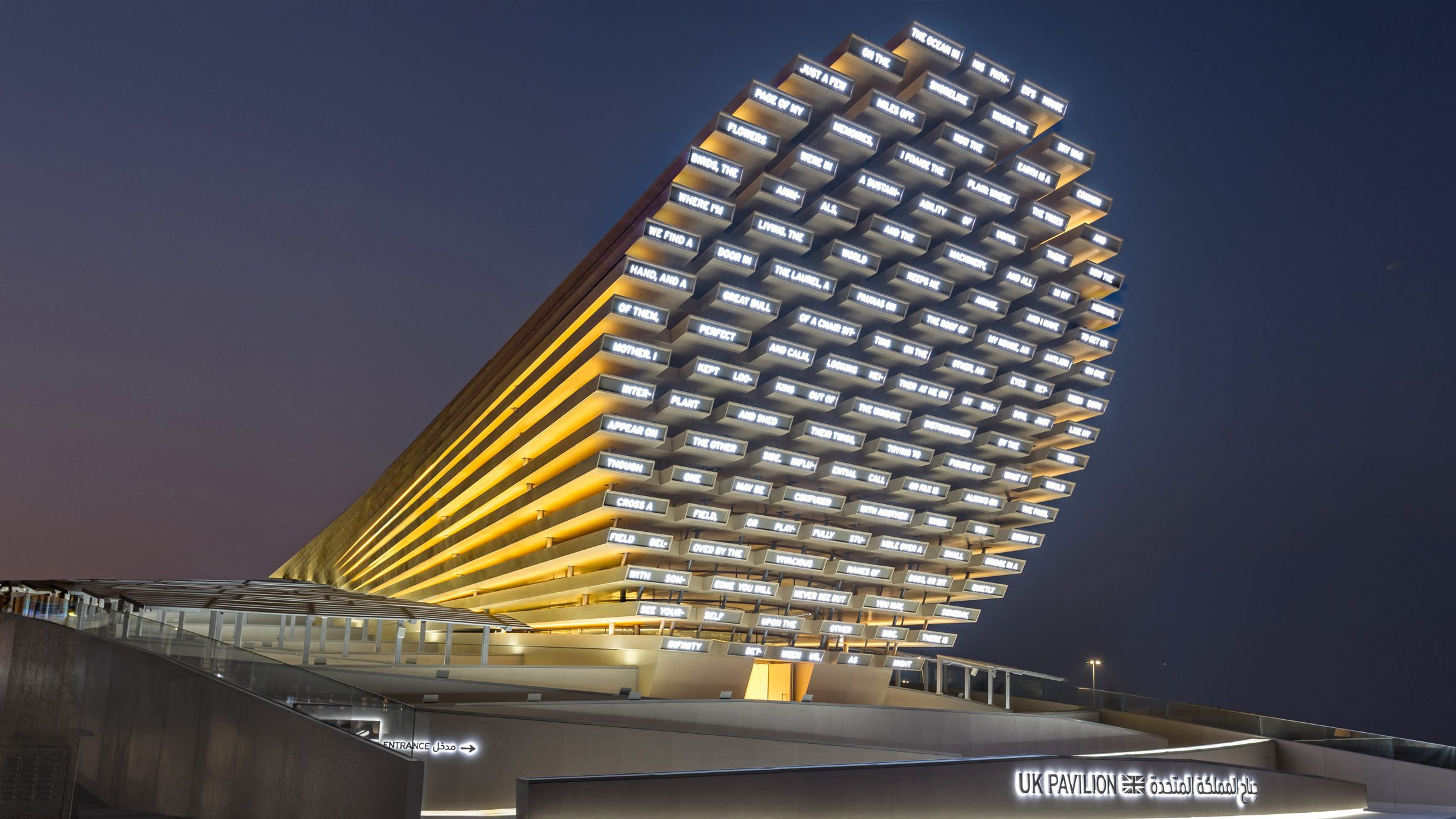 The first UK pavilion designed by a female designer has a circular facade made from protruding slats on which poems are displayed using LED lights.

Also unveiled at the expo were the colourful translucent solar panels made by Marjan van Aubel for the Netherlands pavilion, designed to create the feel of stained-glass windows. 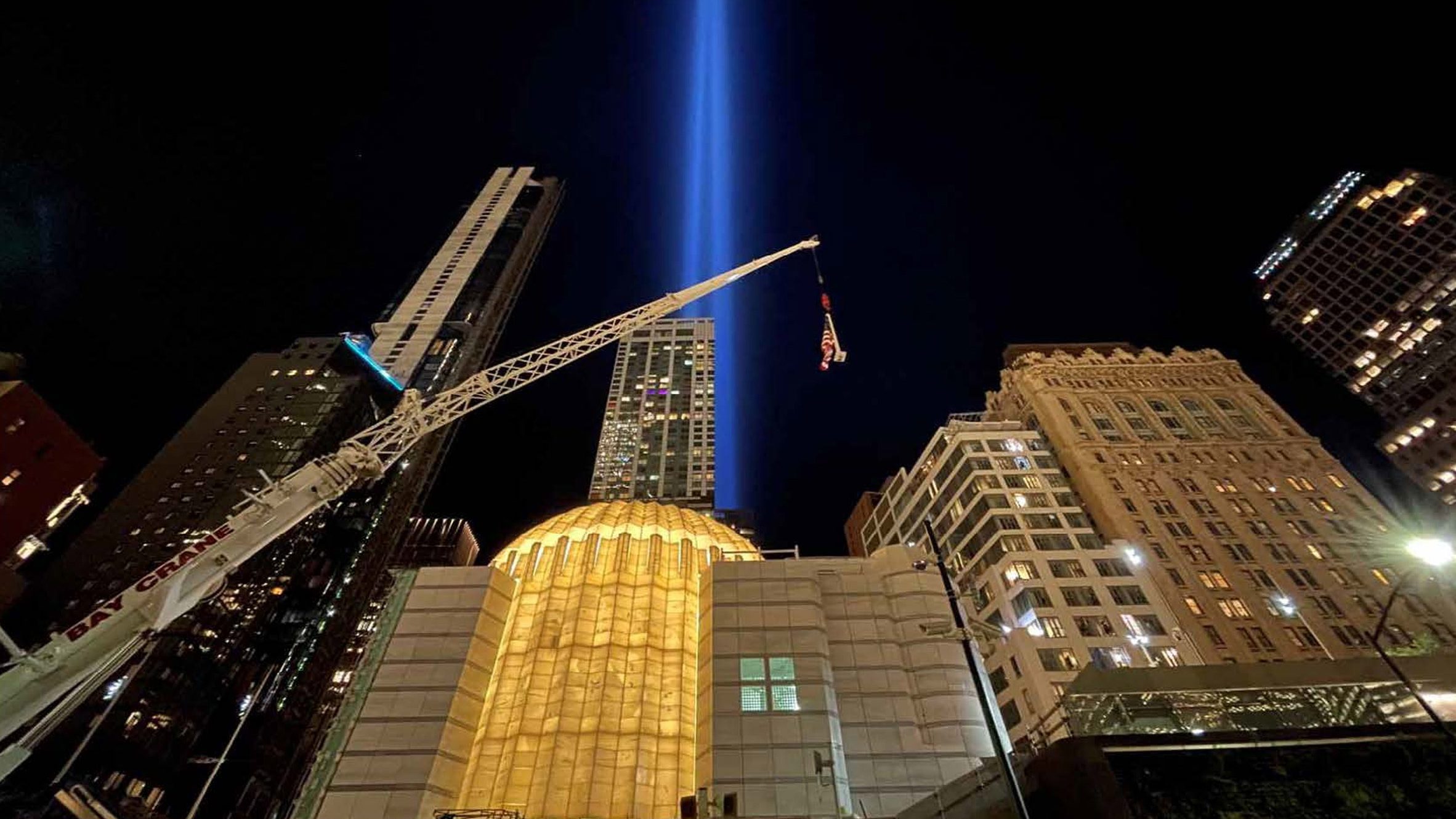 Another Santiago Calatrava design, the St Nicholas Greek Orthodox Church, was illuminated in New York this week as it nears completion. It is being built as part of the redevelopment of the World Trade Center site following the 9/11 terrorist attacks.

Also in New York, American studio Gensler unveiled its redesign for the lobby of Philip Johnson’s AT&T building at 550 Madison.

In design news, Swedish car brand Volvo revealed a redesigned flat logo, making it the latest car brand to do so. The minimalist design is a “modern reinterpretation” of its longstanding Iron Mark logo, the company said.

Recently Nissan, MINI and Toyota have all abandoned 3D-logos in favour of flat designs. 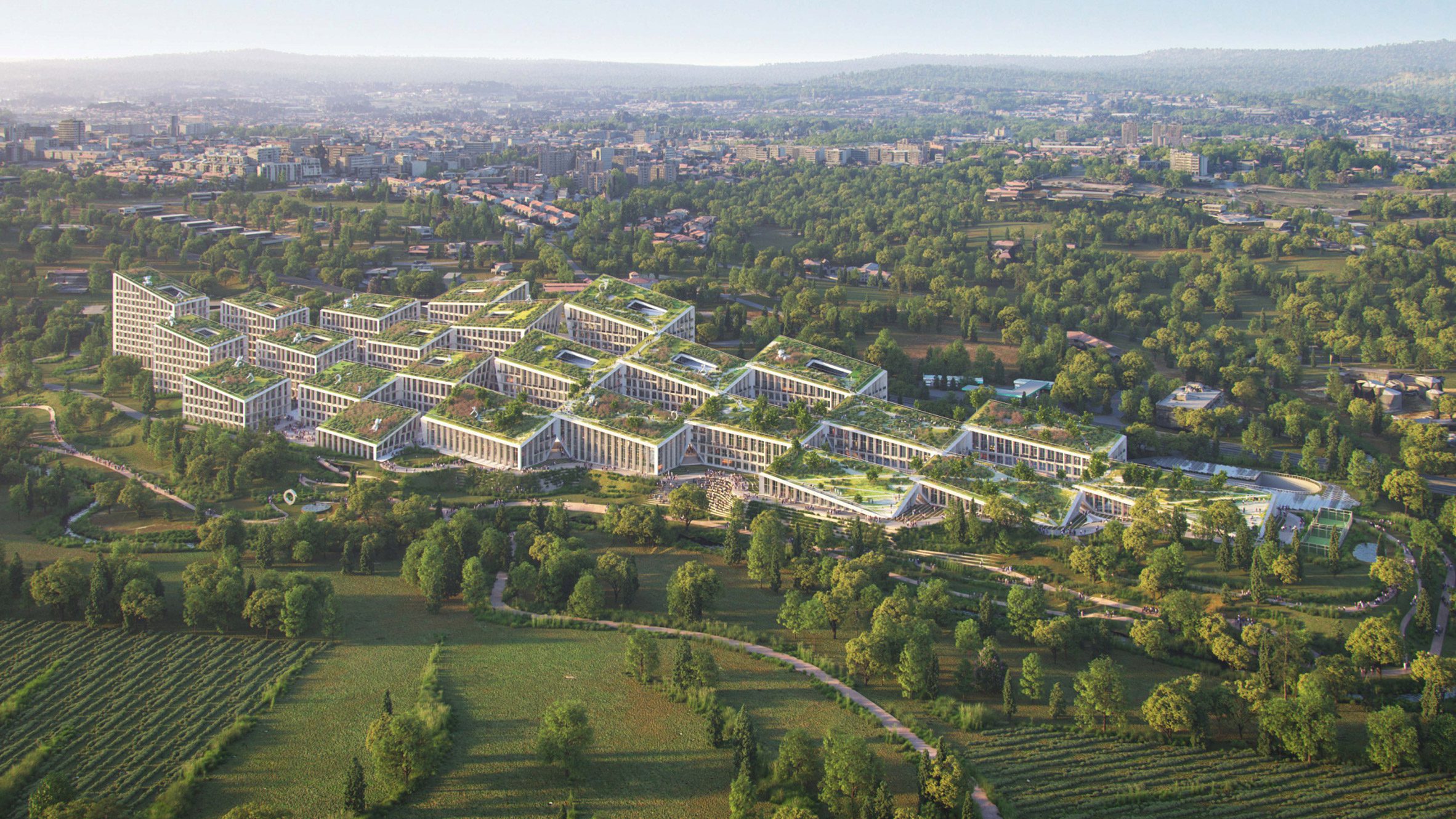 Danish studio BIG announced its plans to build Fuse Valley, a new development in Portugal that will house luxury fashion platform Farfetch as well as a number of tech companies.

Buildings will have walkable green roofs to echo the surrounding hillside and be oriented around landscaped parks, courtyards, gardens and plazas. 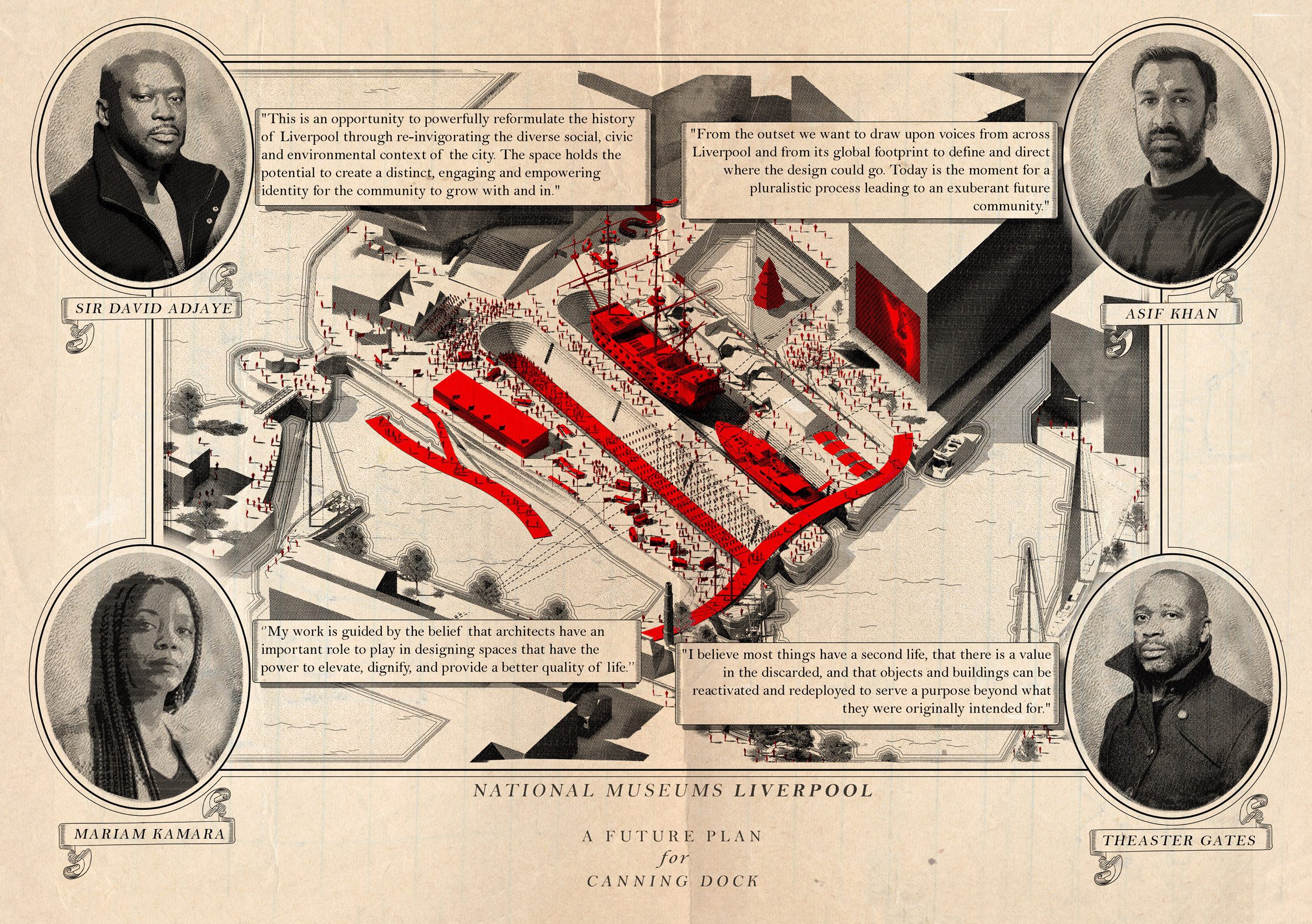 In the UK, a team comprising artist Theaster Gates and architects Asif Khan, Mariam Kamara and David Adjaye was announced as the winner of a competition to transform Liverpool’s Canning Dock.

The project will revitalise the site, which was used in the 18th century to serve and repair ships including those used in the transatlantic slave trade, and aims to bring the history of the slave trade into the public realm. 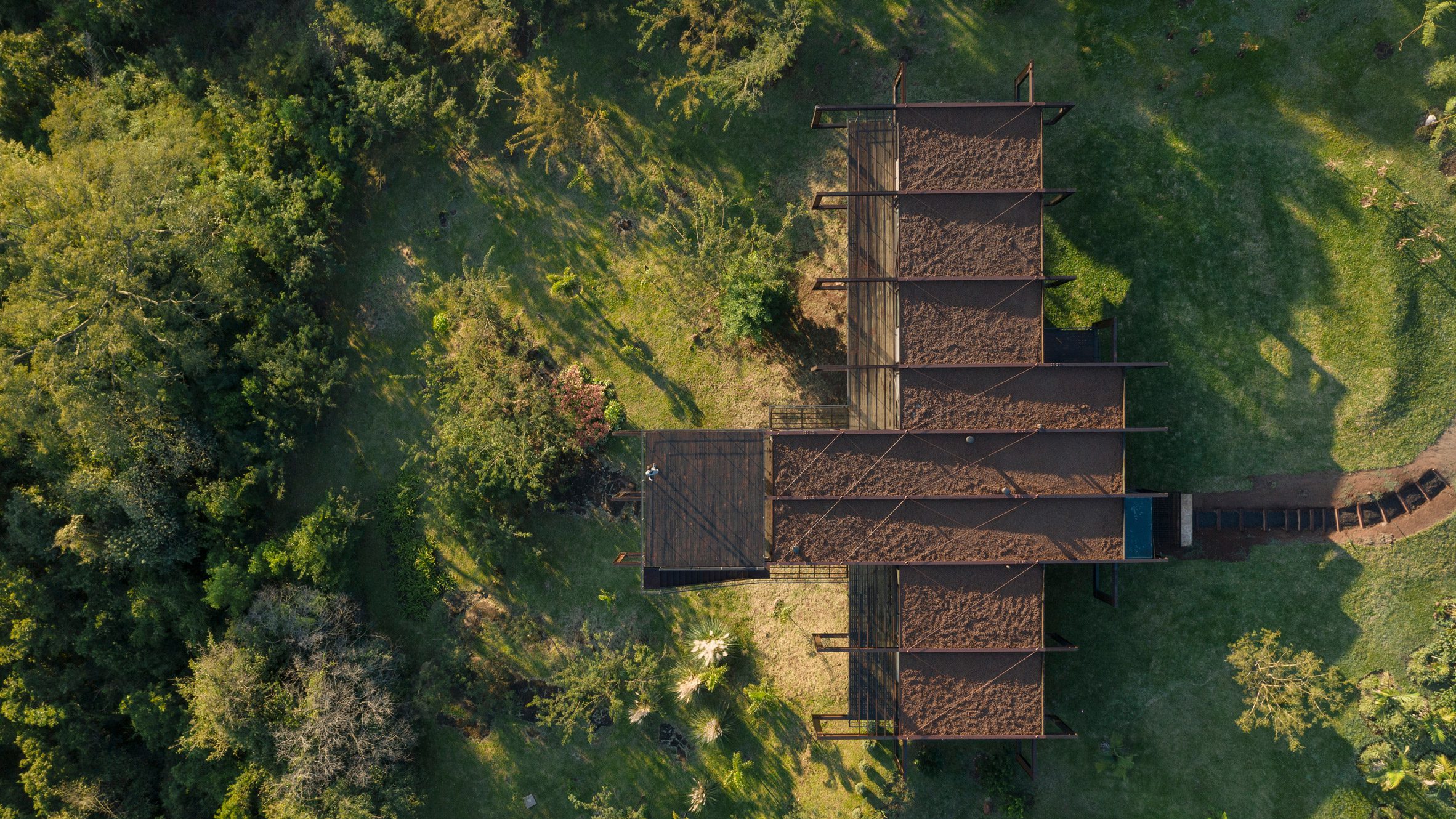 Popular projects this week included a steel house in Paraguay, a co-working space by Snøhetta and a minimalist Shantou restaurant.

This week on Dezeen is our regular roundup of the week’s top news stories. Subscribe to our newsletters to be sure you don’t miss anything.