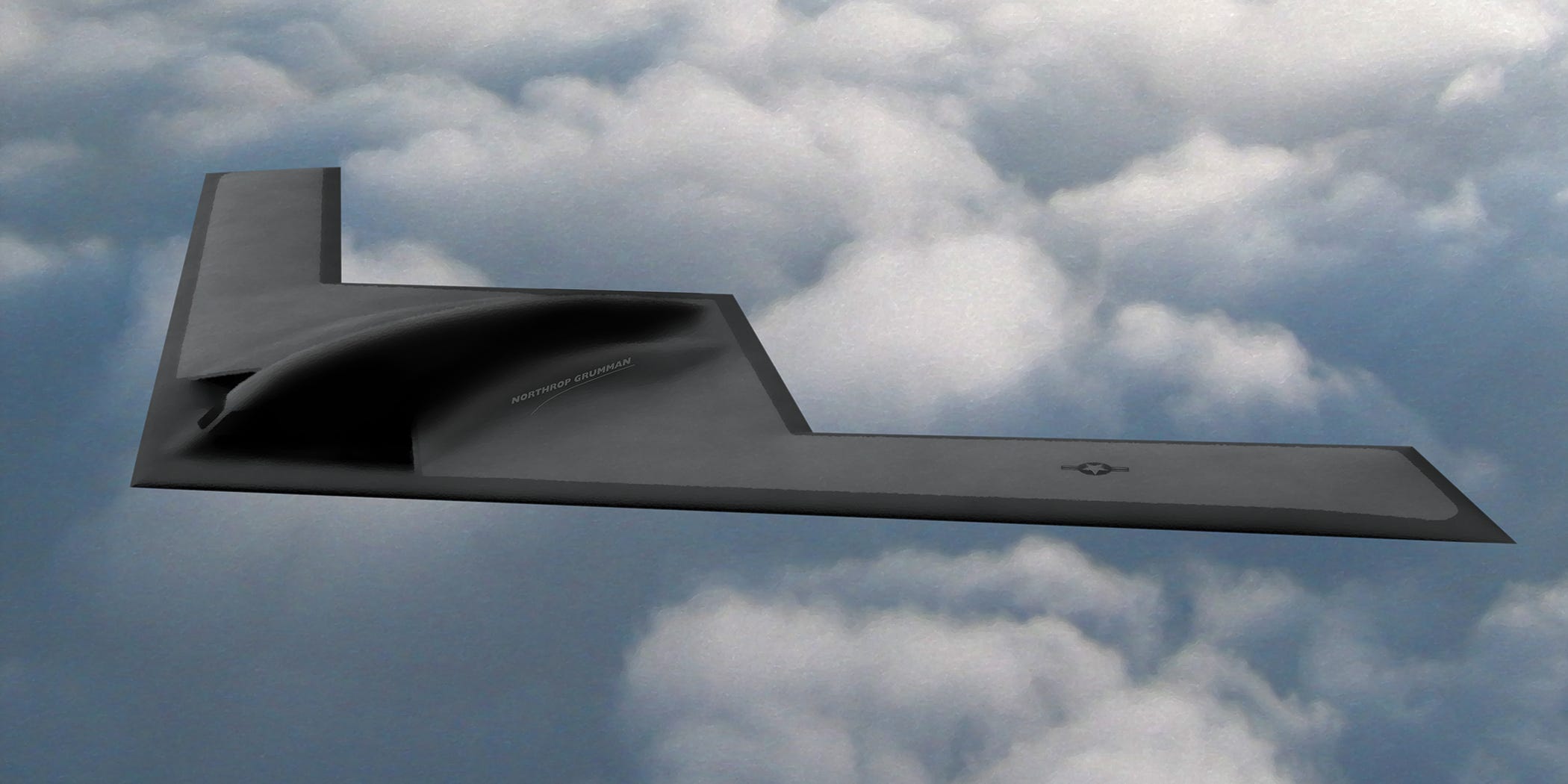 A rendering of the B-21 stealth bomber.

The Air Force's latest rendering shows the new B-21 Raider stealth bomber at Edwards Air Force Base.
The bomber will be thoroughly tested at Edwards AFB before delivery to operational units.
The overall shape of the B-21 seems to be unchanged since a 2020 rendering, with a few details worth a mention.
See more stories on Insider's business page.

The US Air Force published on July 6, 2021 a new rendering of the B-21 Raider stealth bomber, accompanied by its official fact sheet.

The new artist rendering graphic follows the second one that was released in January 2020. The Air Force has put some emphasis on the fact that this is an artist's interpretation, meaning that it could also include some inaccuracies (possibly even intentional as to not disclose important details).

While the last time the renderings featured the locations where the operational bombers will be based, this time Edwards Air Force Base, California, can be seen in the background.

As mentioned in the Air Force's press release, the 420th Flight Test Squadron based at Edwards AFB will plan, test, analyze and report on all flight and ground testing of the B-21 Raider, so it made sense to include in the rendering the "first home" of the bomber after its first flight from the Air Force Plant 42 in Palmdale, where its being built.

The overall shape of the Raider seems to be unchanged since the 2020 rendering, with just few details noticeable and worth a mention. 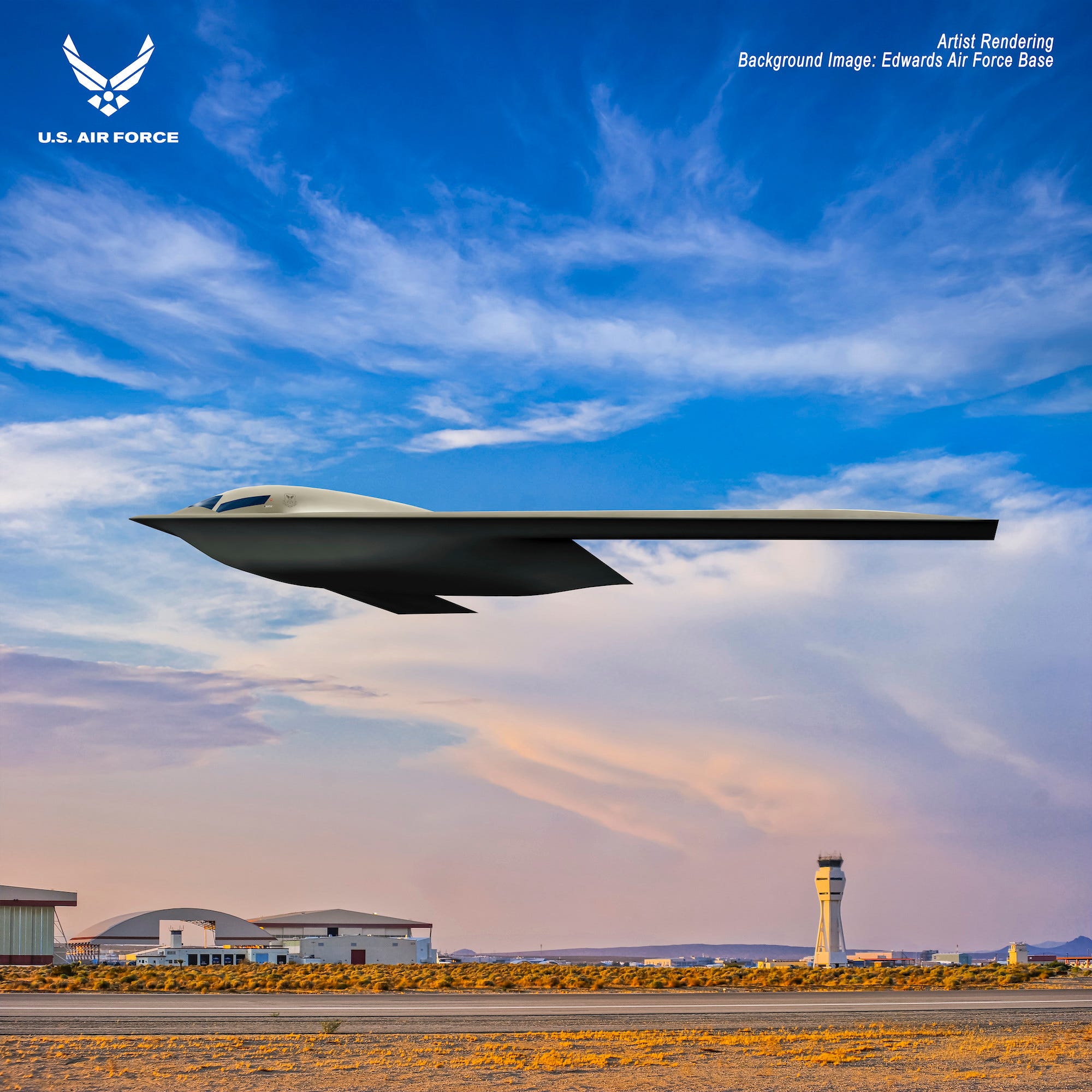 The first, most eye-catching detail is the new set of cockpit windows. The old rendering showed a two-pieces windscreen which resembled in shape the one of the B-2A Spirit.

This time, the Raider has a new four-pieces windscreen, like the Spirit, but with a very different shape for the two lateral windows. The side windows appear to be arched and narrower than the ones in the front (about half the height).

The second detail is the peculiar "hawk's-beak" profile, inherited from the B-2 Spirit and which seemed missing or barely noticeable in the second rendering.

This time the "beak" seems much more pronounced than the one of the Spirit. Another detail can be found on the wings which seem to be thicker than in the old renderings, but this might just be due to the prospective in the image.

There is not a trace of the air intakes in this new rendering. This is one of the parts of the new bomber that, as described by the Air Force earlier this year, required a major redesign before the critical design review in November 2018. The problem was reportedly about the size needed by the air inlet to obtain the right volume flow rate of air for the engines to work efficiently, but it did not impact the cost and schedule of the program.

The B-21 Raider is described in the fact sheet as a component of a larger family of systems for conventional Long Range Strike, including Intelligence, Surveillance and Reconnaissance, Electronic Attack, communication and other capabilities. It will be able to employ a broad mix of stand-off and direct-attack munitions, as well as retaining a nuclear capability, and designed to accommodate manned or unmanned operations. 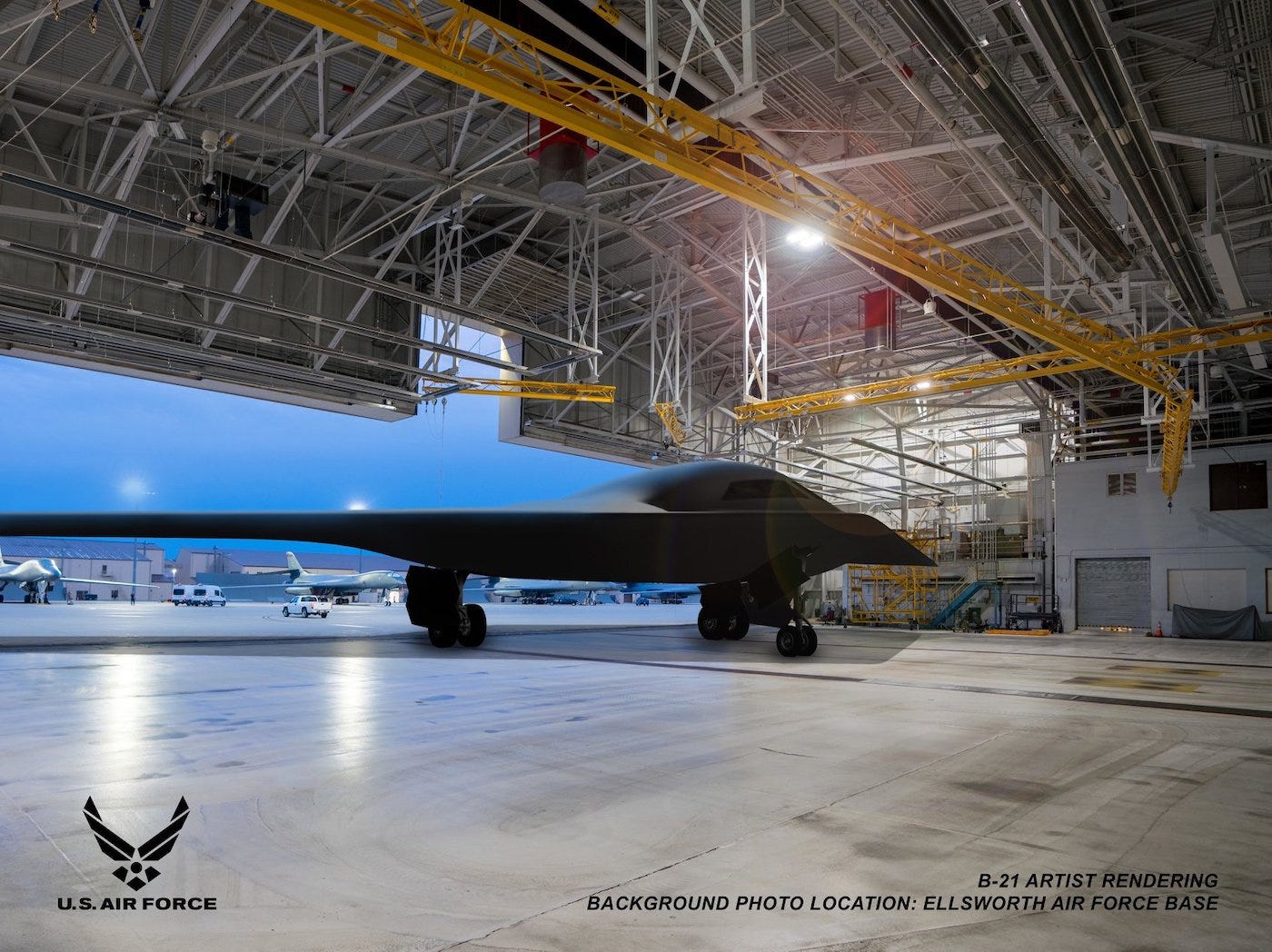 An artist's rendering of the B-21 at Ellsworth Air Force Base, released in January 2020.

Another important feature, present also in other Air Force projects like NGAD, is the open systems architecture, which will reduce the integration risk and enable competition for future modernization efforts, allowing the aircraft to evolve as the threat environment changes.

"Nuclear modernization is a top priority for the Department of Defense and the Air Force, and B-21 is key to that plan," said Randall Walden, Air Force Rapid Capabilities Office director. "The built-in feature of open systems architecture on the B-21 makes the bomber effective as the threat environment evolves. This aircraft design approach sets the nation on the right path to ensuring America's enduring airpower capability."

Earlier this year, it was announced that a second B-21 was under construction while the first one continued to take shape ahead of its expected roll-out in early 2022. According to Randall Walden, director of the Air Force Rapid Capabilities Office, the first aircraft will undergo extensive ground tests between the rollout and the first flight, while the second aircraft will be used mainly for structural testing.

The lessons learned during the building process of the first Raider are being applied to the second one, with the work progressing much more efficiently now that the workers are not restricted anymore to work based just off the blueprint's assumptions.

Last month Darlene Costello, the Air Force's assistant secretary of the Air Force for Acquisition, Technology & Logistics, during a House Armed Services Committee hearing mistakenly said that the first two B-21s were completed, but this statement was later corrected by the Air Force saying that the two aircraft are still in production.

The Air Force didn't, however, announce any new dates or delays, so the program should still be on track for the rollout in early 2022. 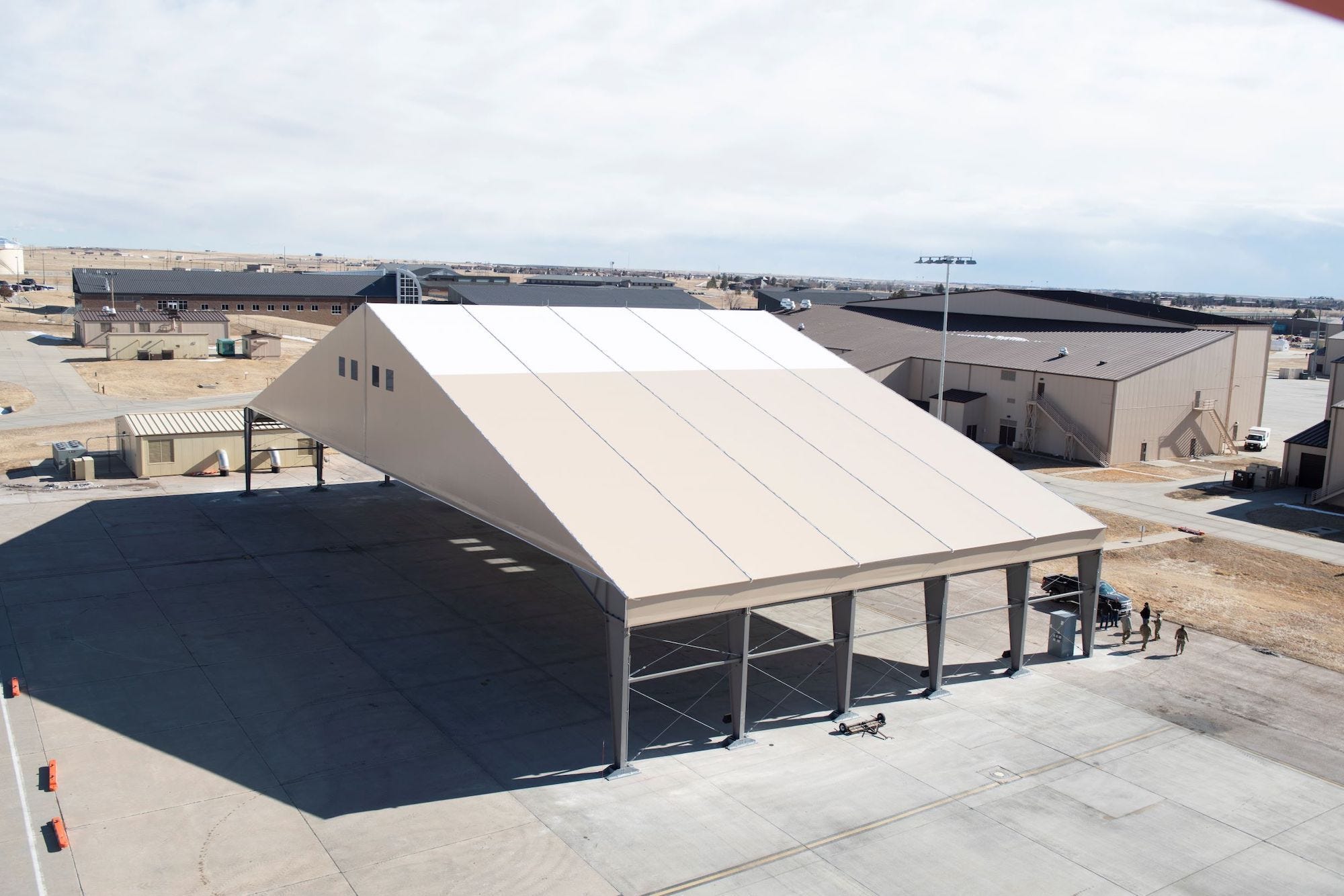 The B-21 Raider Environmental Protection Shelter prototype at Ellsworth Air Force Base, February 26, 2021.

The new bomber is expected to be ready for service around 2026 or 2027, with Ellsworth Air Force Base, South Dakota, being the preferred location for the first B-21 main operating base, and Dyess AFB, Texas, being the alternative.

The Air Force stated that the bases were selected in order to minimize the impact to operations and communities, maximizing at the same time the reuse of existing infrastructure and reducing the overall costs to base the B-21.

The final basing decision will be made this year after the completion of the Environmental Impact Statement this summer, giving the green light to begin the actual B-21 beddown construction.

Ellsworth AFB was selected as the test site for the shelter as it provides the most extreme and diverse weather conditions to test the temporary structures.

"Environmental Protection Shelters help extend the life of the aircraft and reduce required maintenance by limiting UV exposure, limiting snow accumulation and melt, and limiting icing/de-icing operations experienced by the aircraft over time," said Col. Derek Oakley, Air Force Global Strike Command's B-21 Integration and System Management Office director. "These shelters also help us generate sorties more quickly by eliminating the need to always have to move aircraft in and out of hangars."