Arizona sports betting is rolling towards its Thursday, Sept. 9 launch. The Arizona Department of Gaming allocated eight sports betting licenses to professional sports teams/organizations and 10 to tribal nations in the state as sportsbook operators are beginning to give state bettors a glimpse into their offerings.

Sports betting will begin in the state at 12:01 a.m., Sept. 9, but account registration and funding has already begun. Additionally, daily fantasy sports competitions have opened and are currently live. 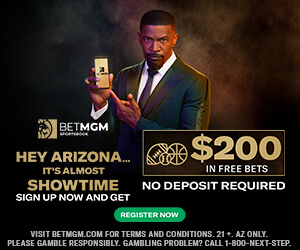 Where Can You Place Bets?

Here’s where the state currently stands on its sports betting journey. The Arizona Department of Gaming received eight sports teams/organization applicants. Here are allocated licenses to the Arizona professional sports franchises and their sportsbook operator partnerships: 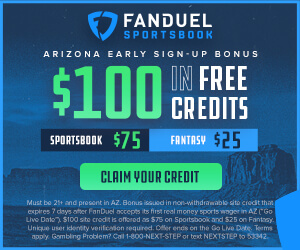 There are still two available licenses for professional sports organizations in the state. PointsBet, which had partnered with the Yavapai-Apache Nation, was not awarded a sports betting license by the department. PointsBet released a statement today that it would continue to explore market access options for the state, so this could potentially be an avenue for the sportsbook operator if it can partner with a remaining sports organization or group.

“Whilst disappointed that Cliff Castle was not awarded a license, PointsBet continues to assess market access opportunities in Arizona,” the company noted in a release.

The department received 16 qualified tribal applicants. The department awarded the 10 licenses based on a set of 19 criteria, including gaming experience and track record of the applicant. Here are the winning tribal casino applicants and their sportsbook operator partnerships:

While the sportsbook licenses are in place, the launch may be challenged by a pending lawsuit against the state. Filed on Thursday, Aug. 26, by the Yavapai Prescott Indian Tribe, the lawsuit seeks judgement declaring the state’s sports betting bill as unconstitutional because it violates the state’s Voter Protection Act. The Voter Protection Act declares the “legislature shall not have the power to amend an initiative measure approved by a majority of the votes cast thereon, or to amend a referendum measure decided by a majority of votes cast thereon, unless the amending legislation furthers the purposes of such measure.”

Additionally, a motion for a temporary restraining order and a preliminary injunction has been filed, requesting the state be unable to allow sports betting until the case can be heard.

An emergency hearing of the case has been scheduled for Friday, Sept. 3, according to the Maricopa Country Superior Court.