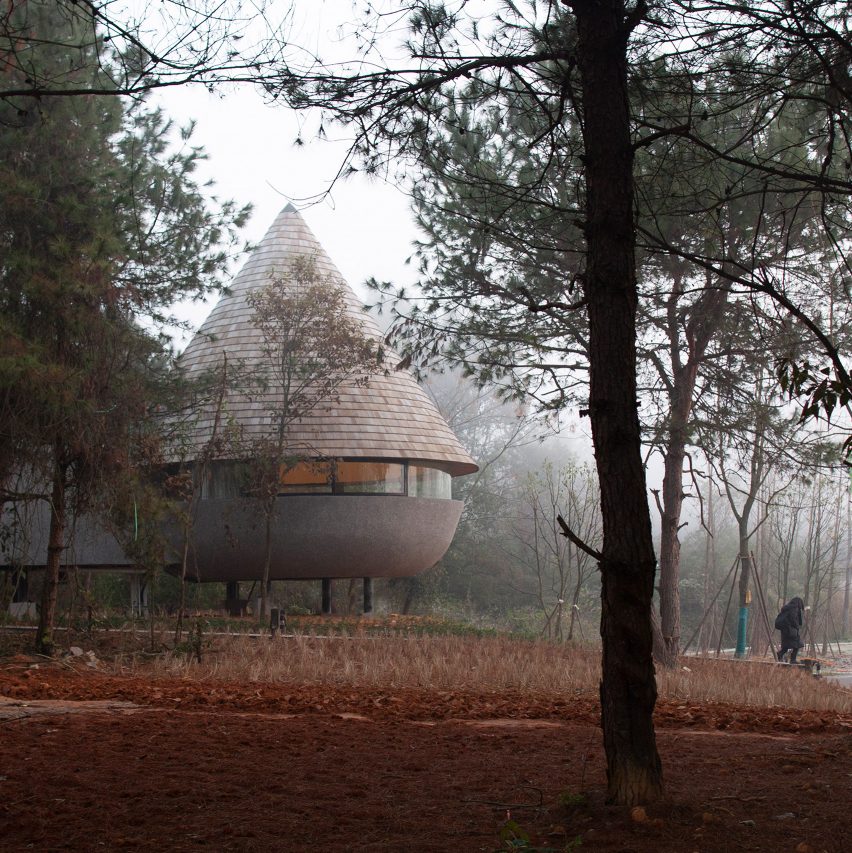 A conical roof covered in shingles caps The Mushroom guesthouse, which ZJJZ Atelier has built in a pine forest in Jiangxi, China to draw visitors away from a “mundane ordinary life”.

Chinese studio ZJJZ Atelier designed the cabin for Tree Wow, a hotel complex made up of several houses near a popular scenic spot called Fairy Lake in Xinyu.

The Mushroom was designed to have a surreal, dream-like quality, paying homage to local folklore in which a man is said to have fallen in love with a fairy at the lake. 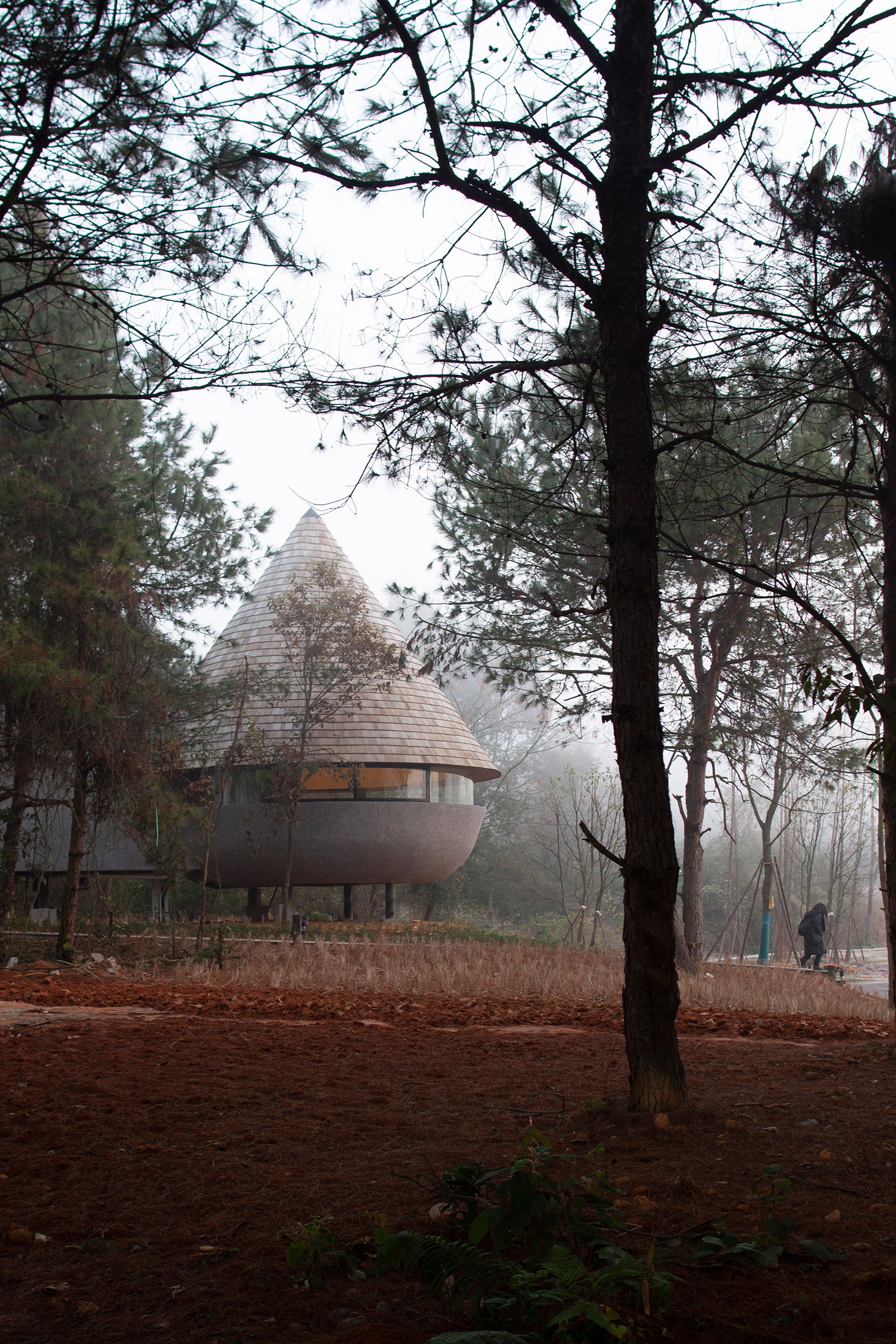 Above: ZJJZ Atelier has created a guest house called The Mushroom. Top image: it nestles in a Pine forest in Jiangxi

“According to a Chinese ancient tale, the Fairy Lake is where the fairy and the man fell in love,” ZJJZ Atelier told Dezeen. “It is a unique site that owns a place in folk culture,”

“The client would like to create a place that is surreal, in order to allow the visitors to pull themselves away from mundane ordinary life, to relax and enjoy nature,” it continued. “Our design is a spatial response to that request.” 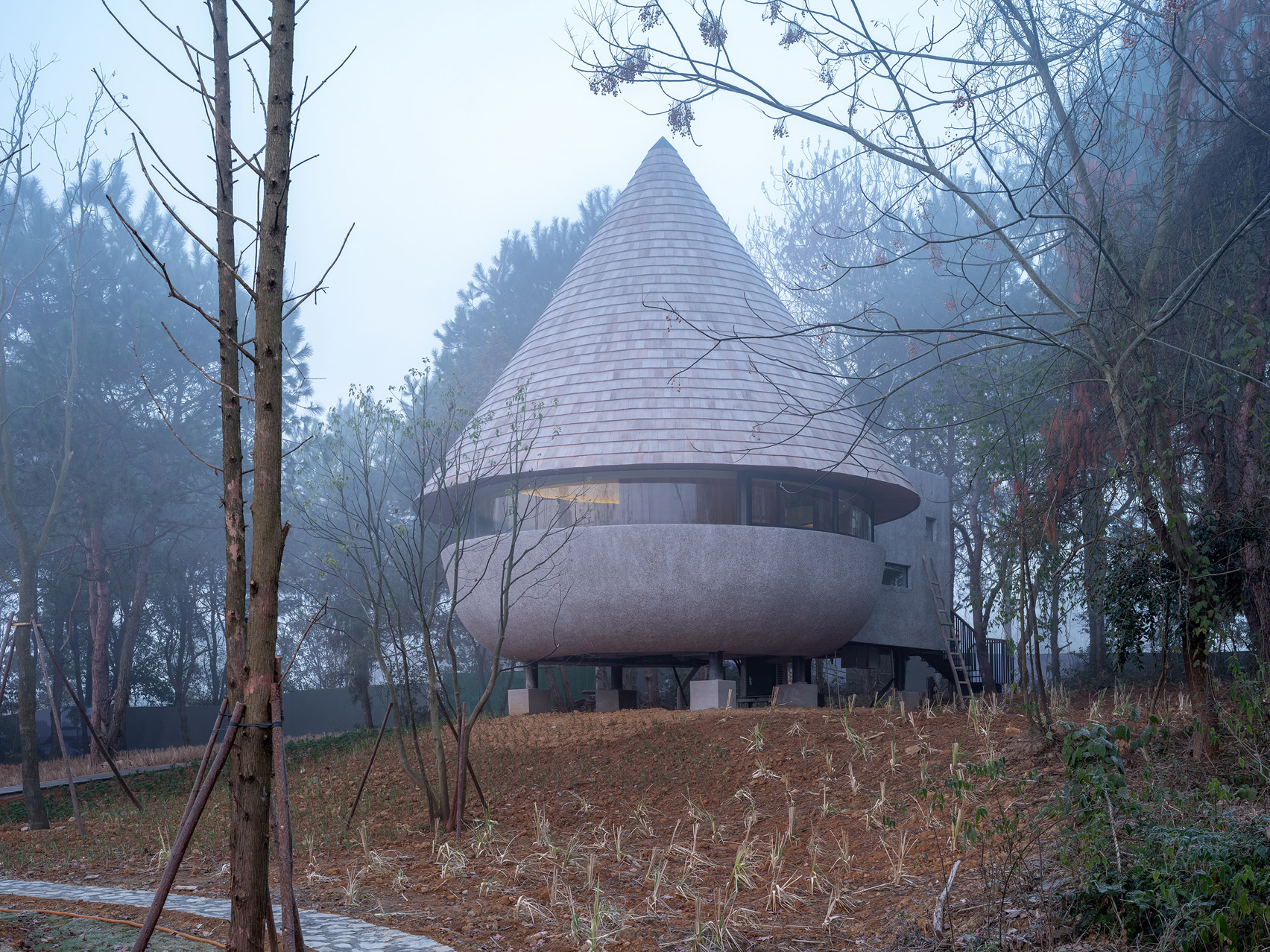 It is capped by a conical roof. Photo is by Tian Fangfang

To help The Mushroom blend into its site, ZJJZ Atelier created a textured material palette with granolithic concrete lower walls and tactile pine shingles on its conical roof.

The studio also elevated the structure above ground in order to minimise its impact on the site and encourage plants to grow up and around it over time. 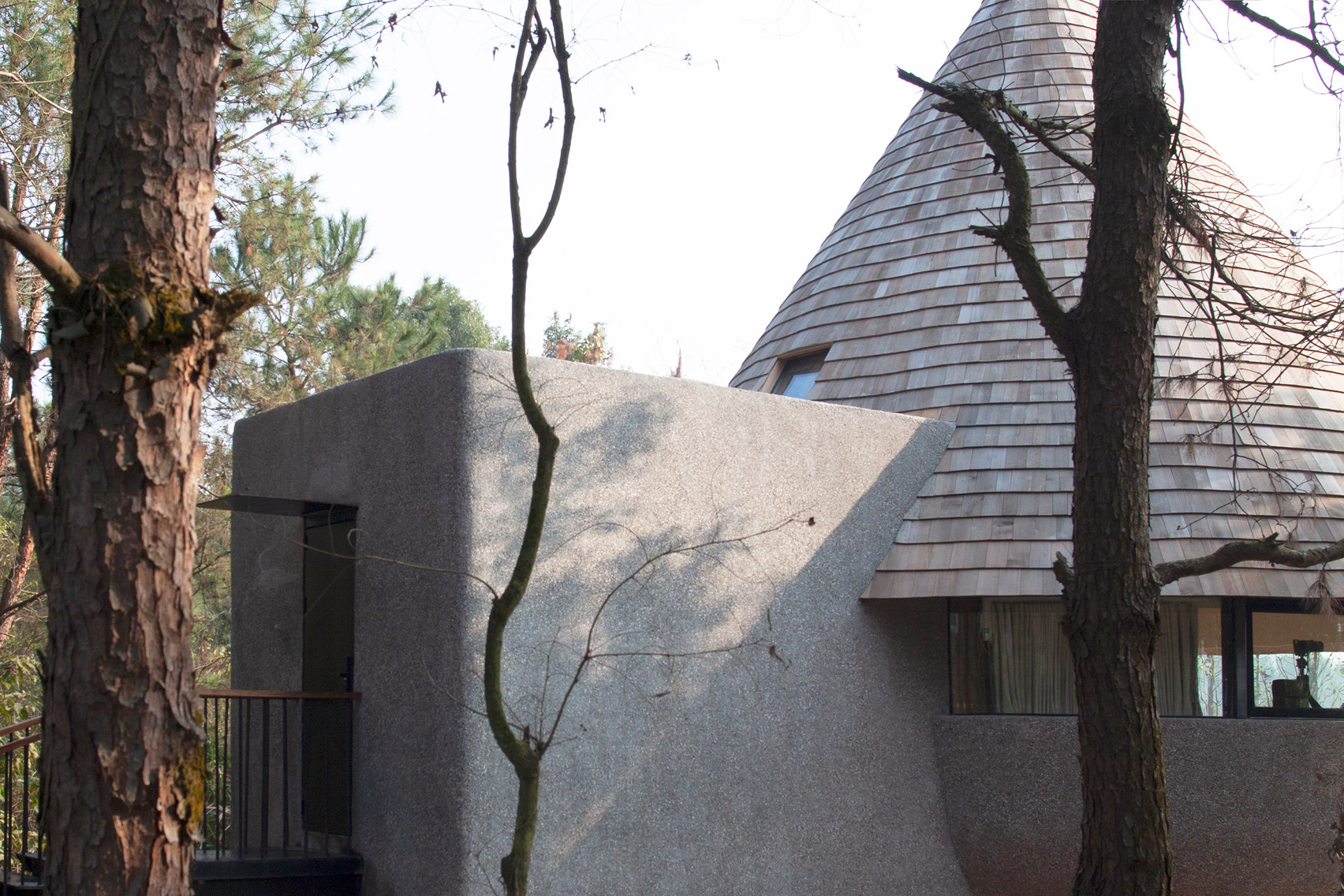 It is divided into two volumes

Inside, The Mushroom is divided into two volumes, with the main space cylindrical space tucked below the conical roof.

This space contains a guest room, a small loft for children that is accessed by a ladder and a long panoramic window that offers an “unobstructed view of the surrounding nature”. 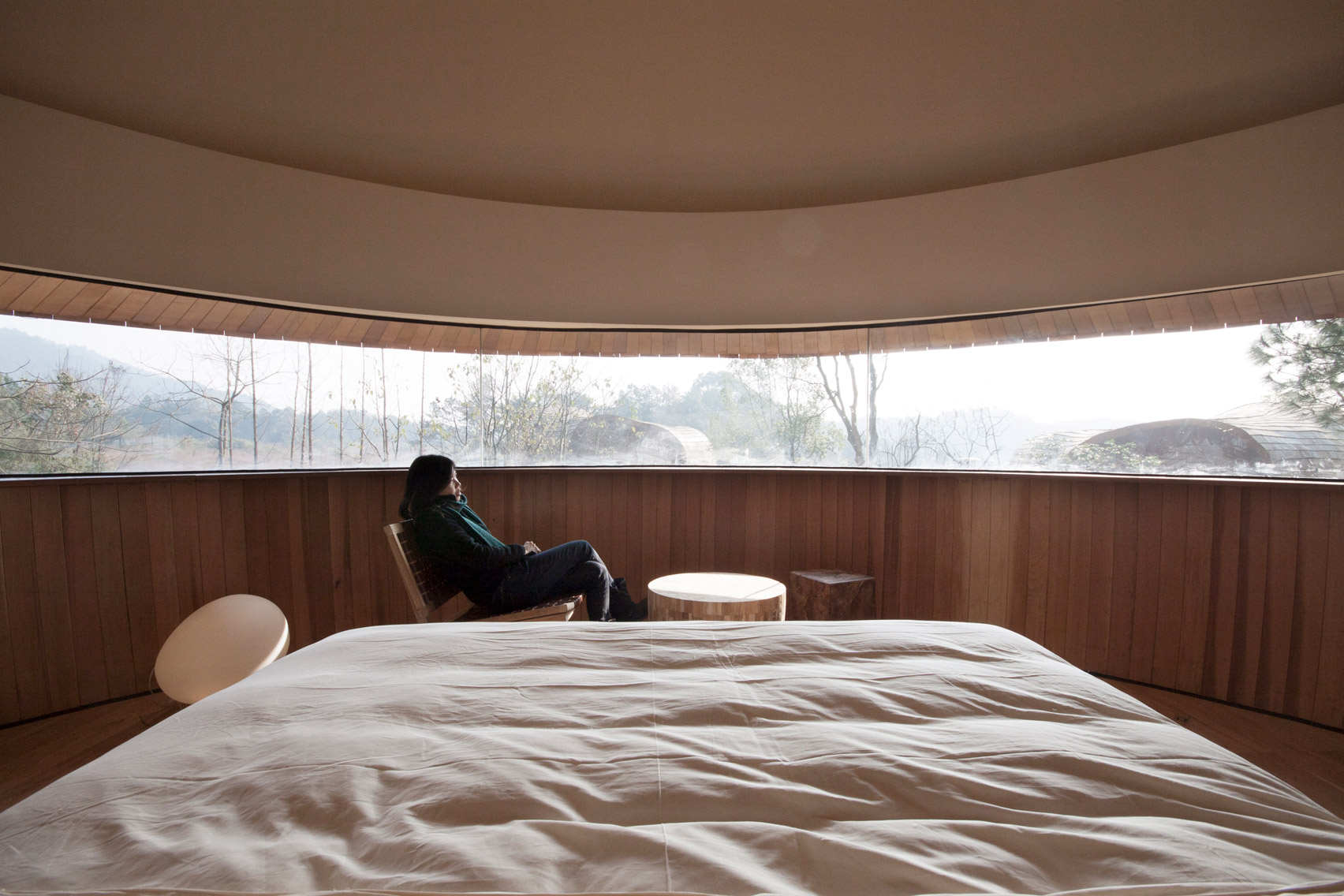 A large panoramic window features in the guest room

An entrance area, bathroom and storage space are positioned in an adjoining rectangular volume, which is connected to the main circular block.

This is positioned beside the bathtub to bring nature inside while ensuring the privacy of the occupant.

A circular skylight overhead floods the room with natural light and helps to change its atmosphere depending on the time of day and weather. 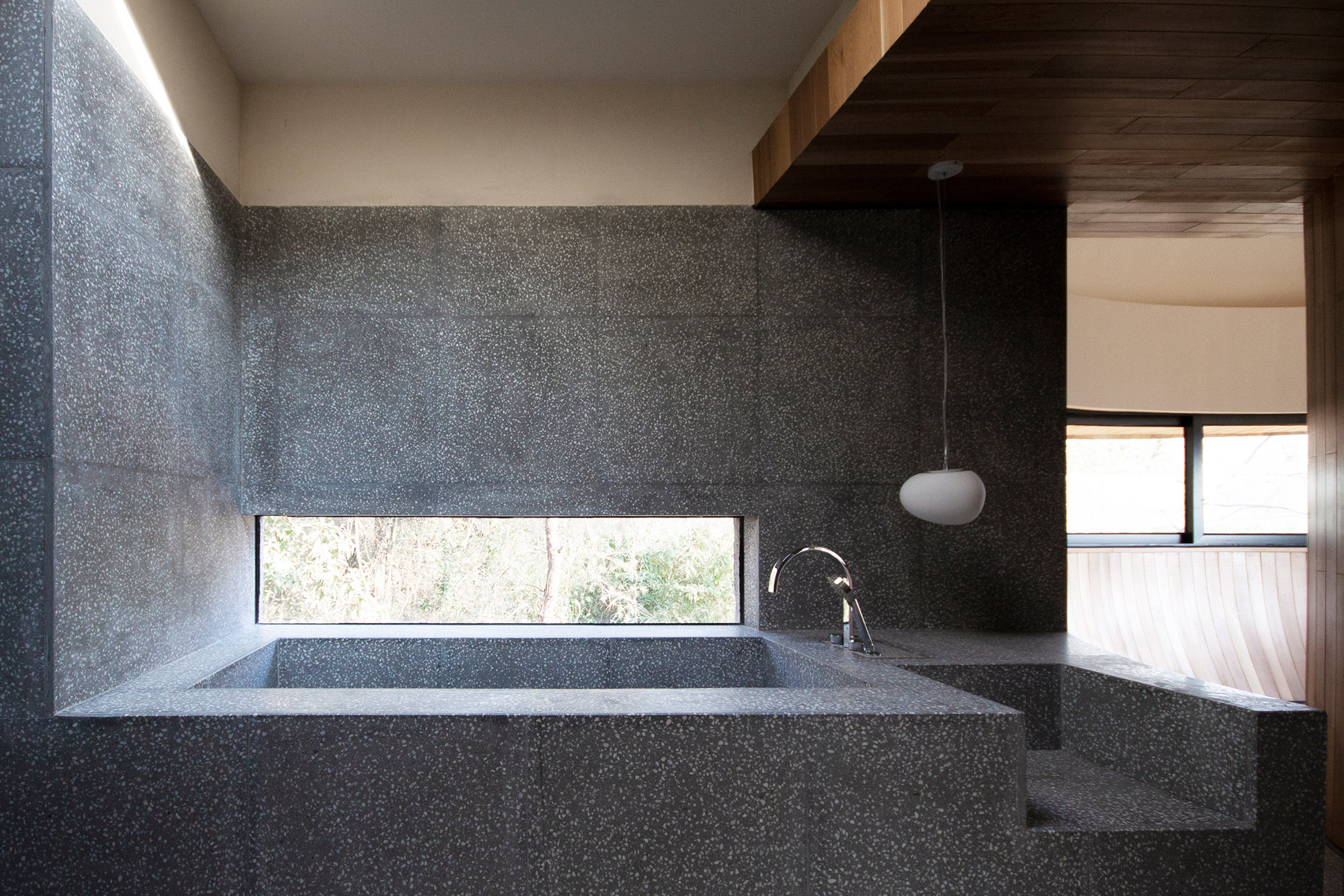 The bathtub also has its own lookout

The Mushroom’s interiors are unified by their pared-back material palettes, dominated by wood with portions of terrazzo that echo the granolithic concrete exterior.

Described by ZJJZ Atelier as “simple and coherent”, this is hoped to retain focus on the views framed by the large windows. 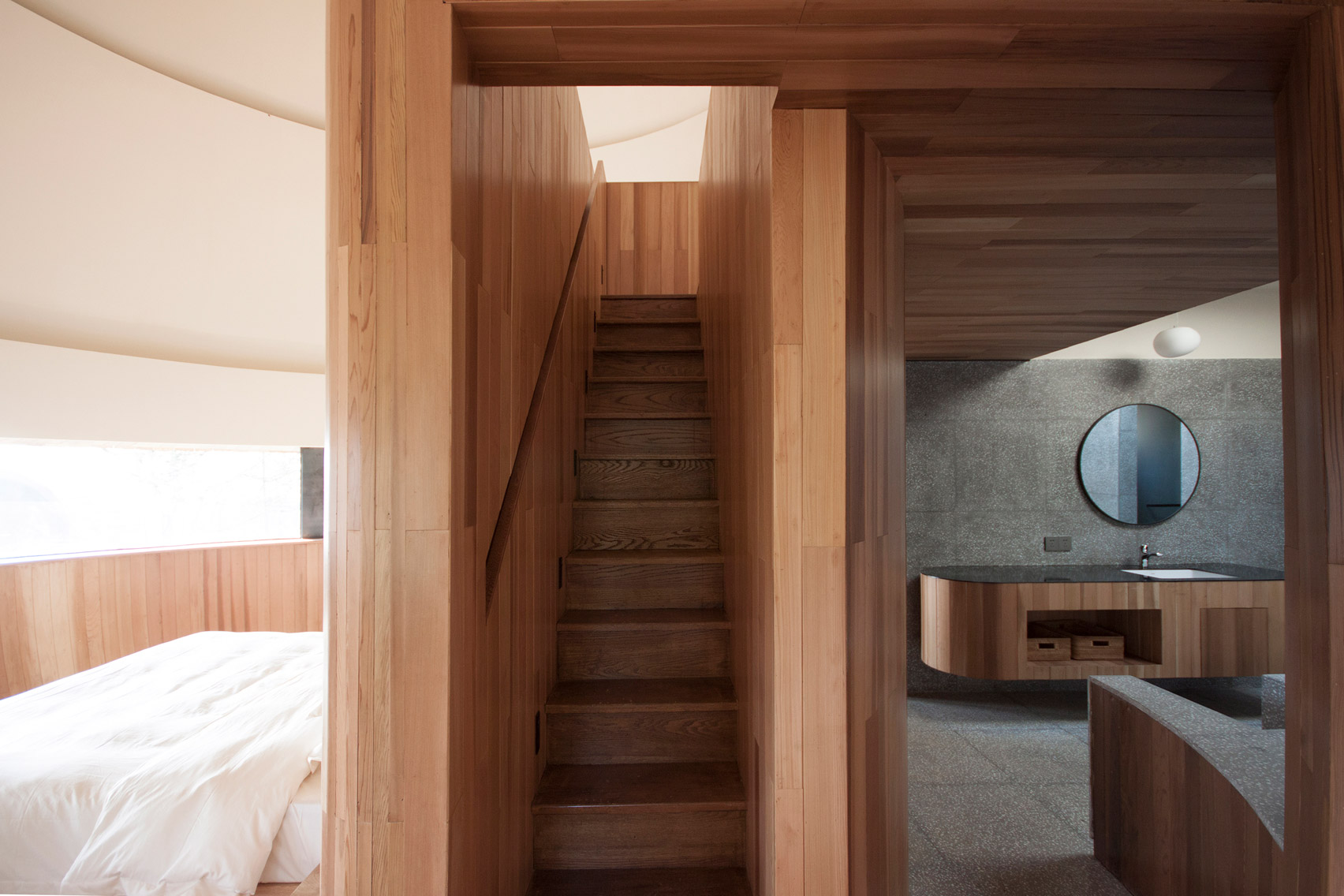 Wood and terrazzo dominate the interiors

ZJJZ Atelier is an architecture studio based in Shanghai. Its other recently completed projects include the Mountain Bar and Restaurant that has a screen of wooden louvres that can be folded back and The Woodhouse Hotel that is formed of 10 wooden cabins on a mountain.

Photography is by ZJJZ Atelier unless stated.